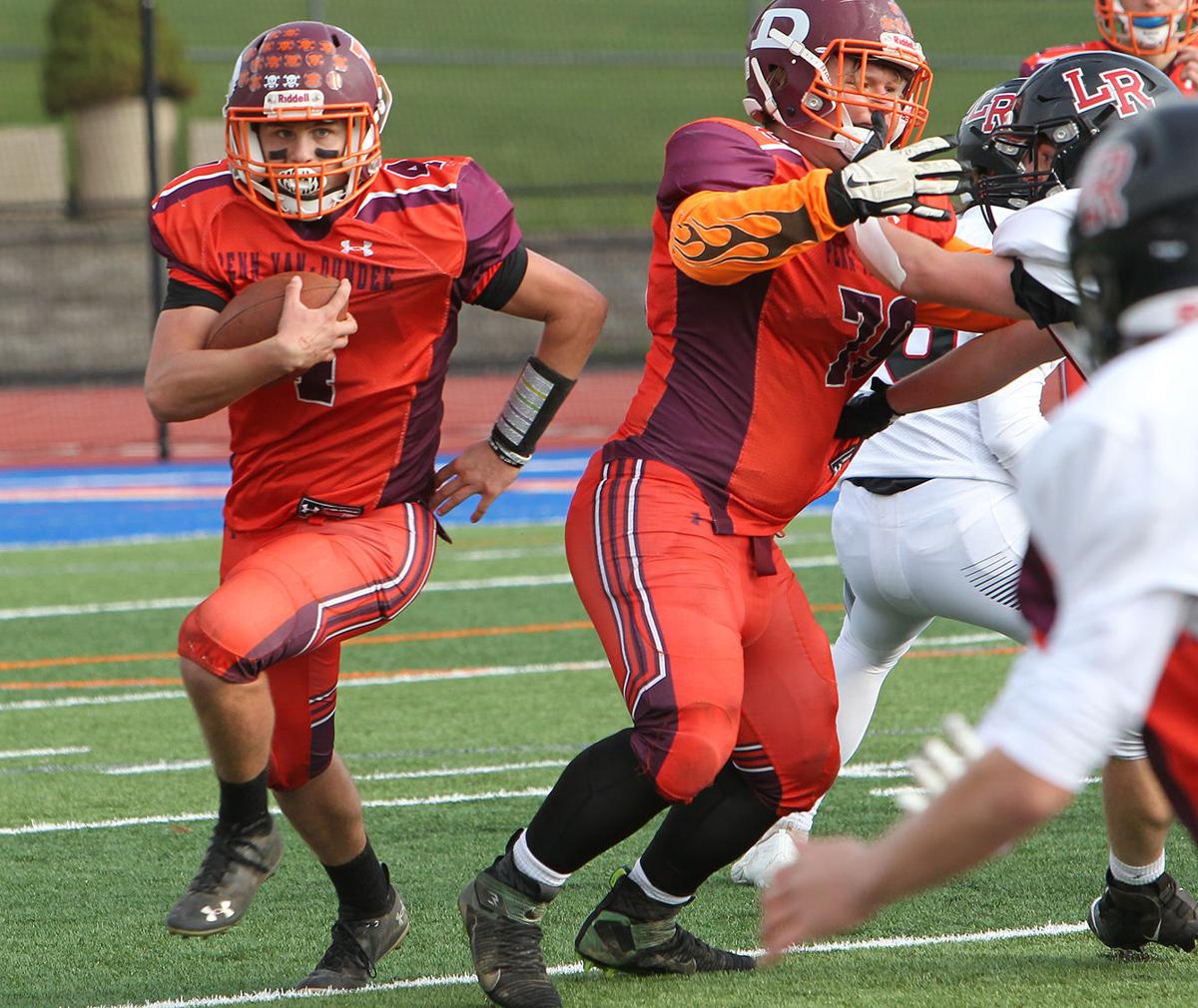 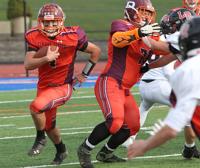 With Nick Slavick out, senior Kaden Labar (4) took on most of the running back duties for Penn Yan/Dundee against LeRoy on Saturday. 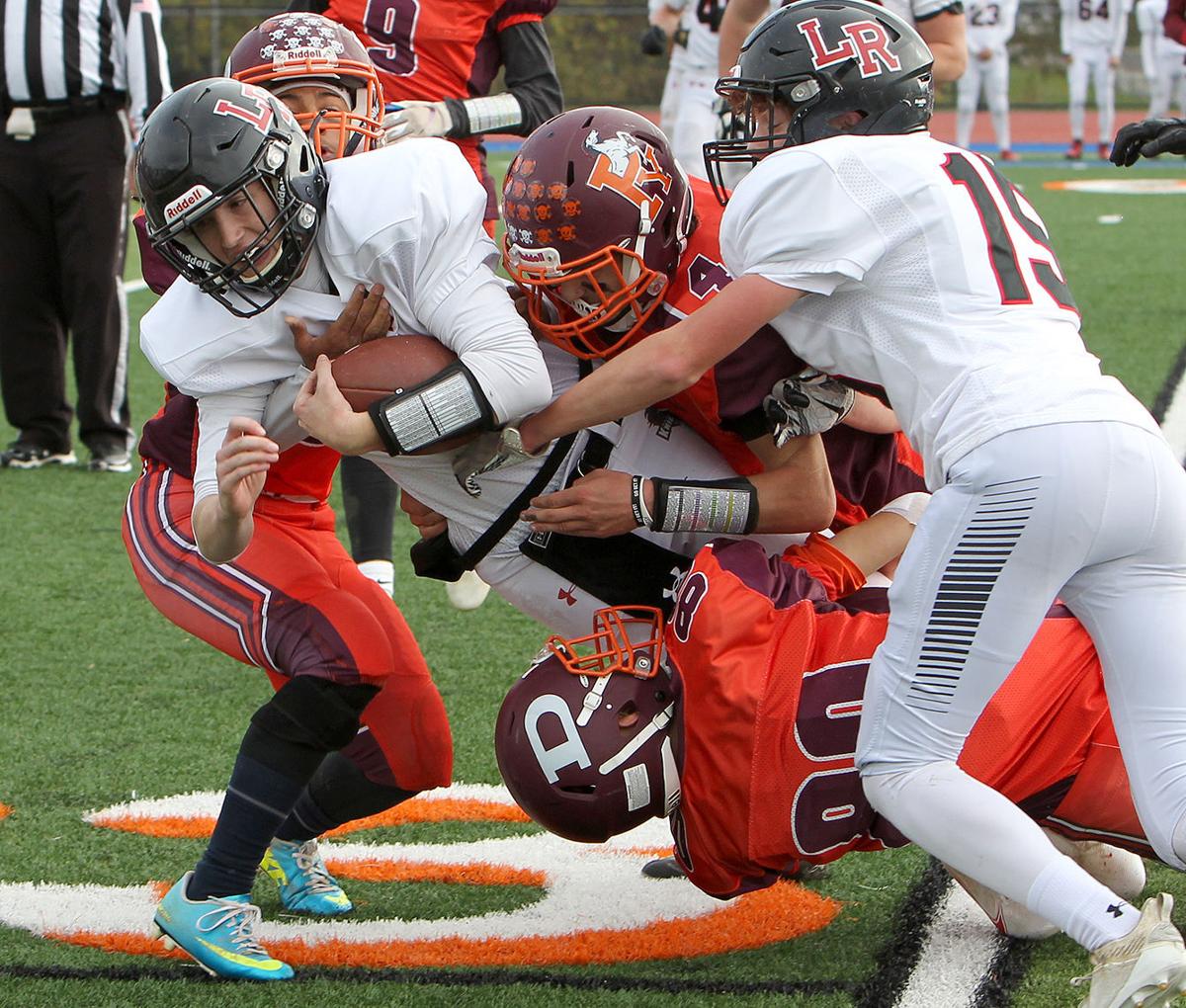 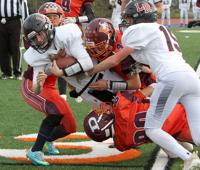 With Nick Slavick out, senior Kaden Labar (4) took on most of the running back duties for Penn Yan/Dundee against LeRoy on Saturday.

Penn Yan/Dundee showed heart, but fell short by a final score of 14-7.

Penn Yan/Dundee (4-3) struggled to capitalize on the Le Roy mistakes, hurting its chances of winning in a rare Saturday-morning contest.

The Oatkan Knights coughed up eight fumbles, but the Mustangs seized only half of them. Le Roy (7-1) struck first and took a 7-0 lead after the first quarter of play.

On the ensuing drive for the Scottish Mustangs, senior quarterback Carter Earl threw a 46-yard touchdown from shotgun to senior wide receiver Anthony Druker. Earl found Druker in the middle of the field, and his pass floated over multiple Oatkan Knight defenders.

Senior kicker Owen Bishop knocked the point-after through to knot the game up at 7-7 with 11:11 to play in the second quarter.

For the second time this season, Rasul Douglas delivers game-changing interception for Packers

Jim Polzin: Packers positioned for regular-season success after grinding out a victory over the Rams

Despite the Penn Yan/Dundee defense playing stout all morning long, one blown coverage led to a 65-yard passing touchdown with 1:12 to go in the first half, giving the visitors a 14-7 lead.

Penn Yan/Dundee did have one final try to send the game into overtime with seven minutes left to play in the game. Earl and the PYD offense faced a third-and-long. Earl was pressured and forced to backpedal 25 yards to avoid the sack. With the fans yelling to get rid of the ball, Earl was able to find some Scottish Mustang magic and connected with senior running back Kaden Labar for the first down..

Earl slung the ball to senior Tyler Bouchard for another Scottish Mustangs first down to continue the drive and fire up the home crowd. Once again PYD couldn’t get 10 yards and faced another fourth down just outside the Le Roy red zone.

Earl scrambled out right and lobbed a pass to the middle of the field for senior wide receiver Ashtian Dunning, who made the catch but was short of the first down, giving the ball back to Le Roy with 2:59 to play in the game.

The Oatkan Knights secured a key first down before running out the clock and stealing a win on Mustang Field.

The Scottish Mustangs now prepare for the Class C sectionals next week.

“We need to get better,” McBride said on his team heading towards sectionals. “Every week we get better. Class C is loaded with teams, so we’re just one of the good teams. We just have to go out and beat some of the other good teams.”