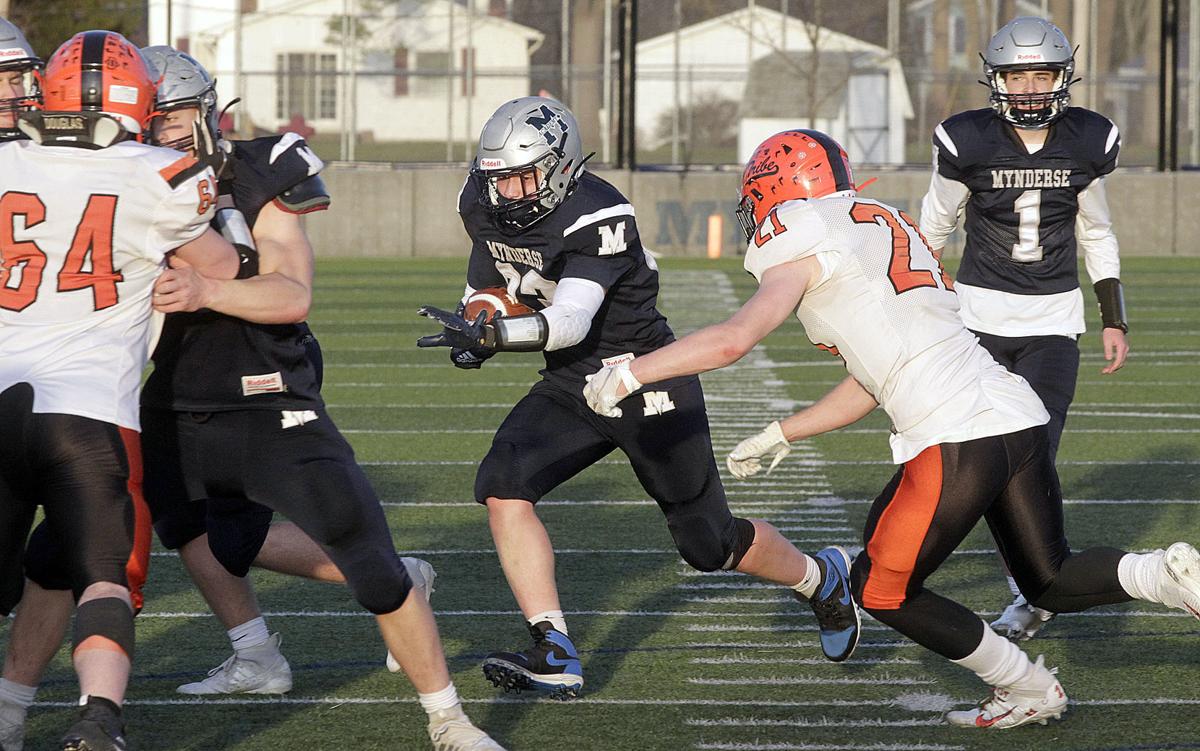 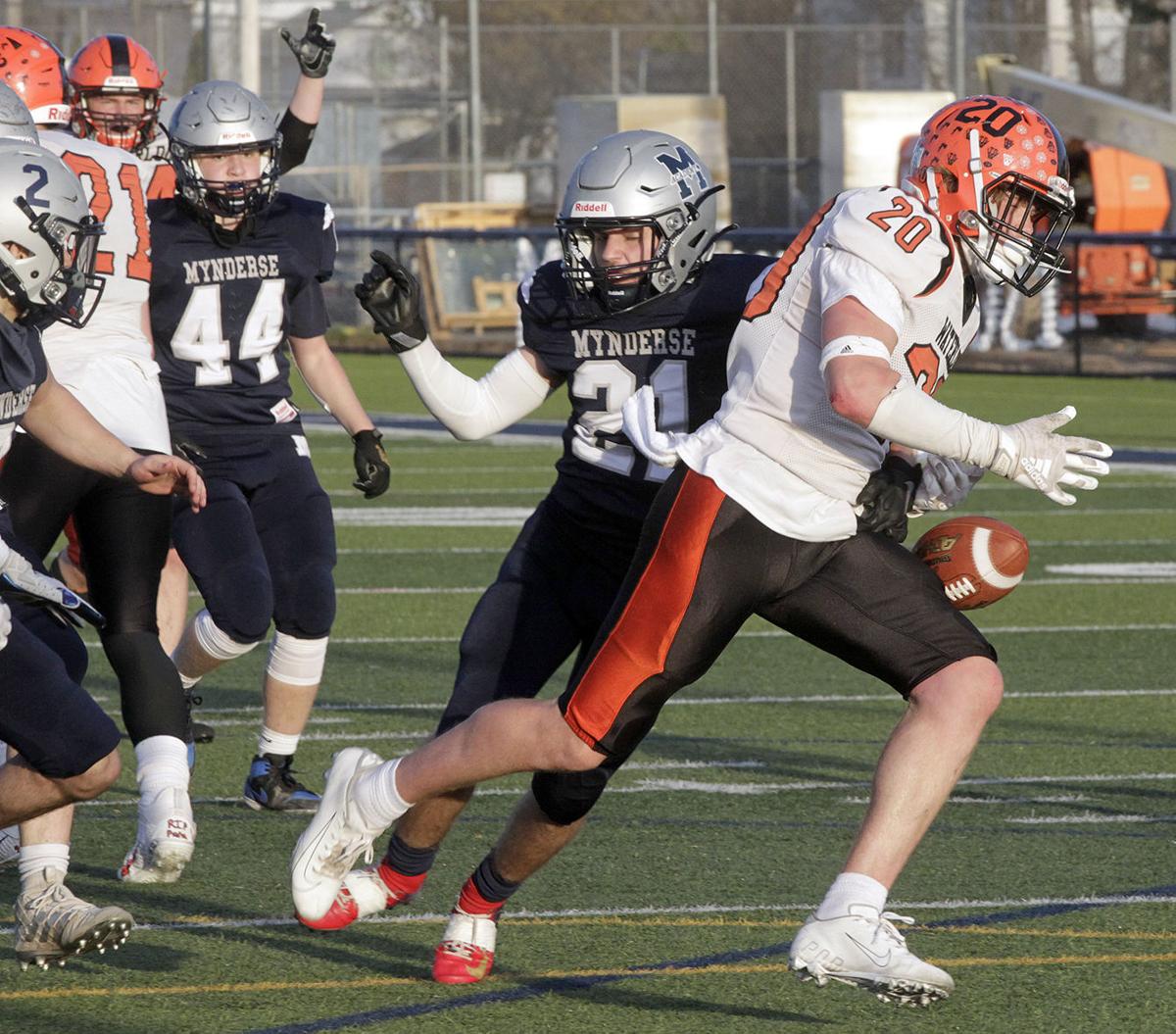 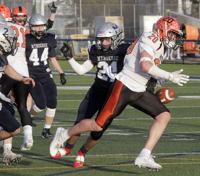 Mynderse junior Colin Ryan (21) strips the ball from Waterloo running back Kyle Slywka (20) just before he reached the end zone. The ball was recovered by the Blue Devils. 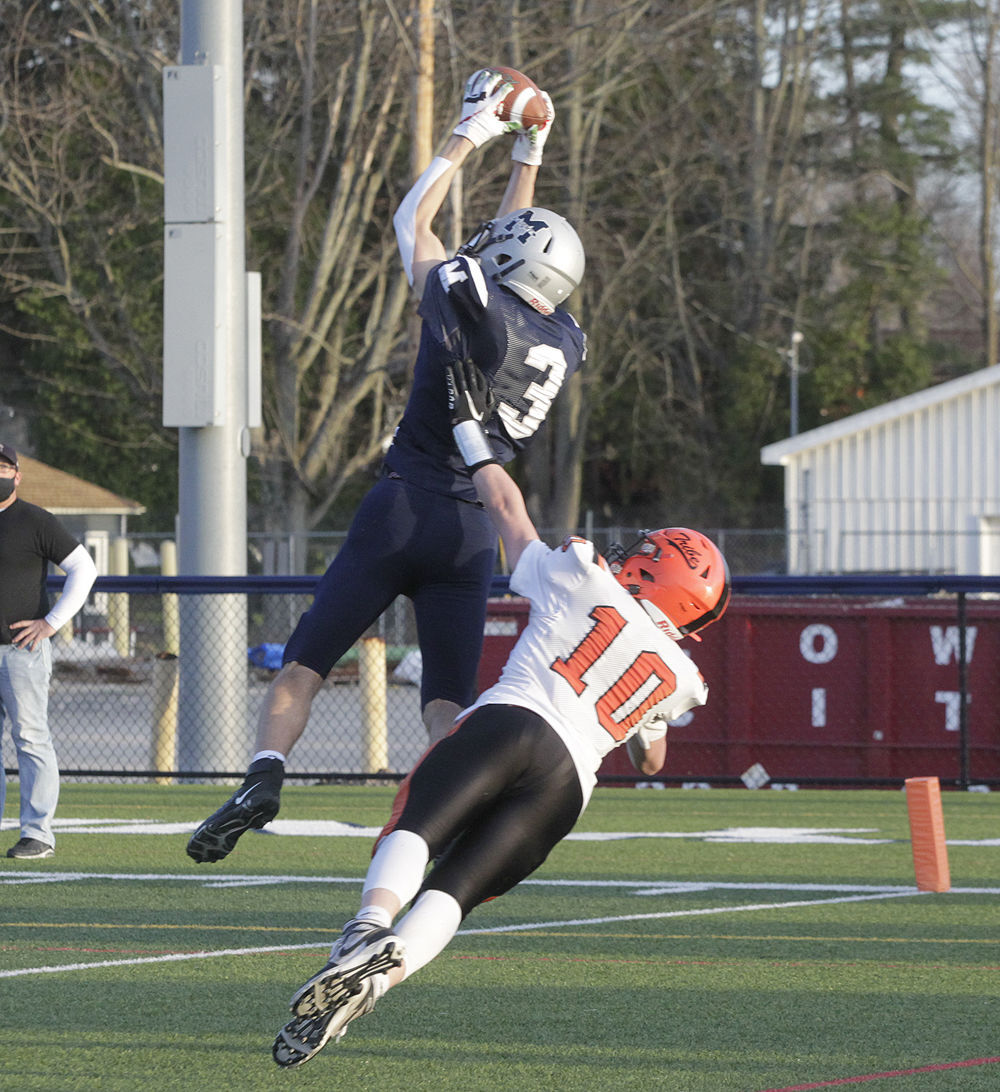 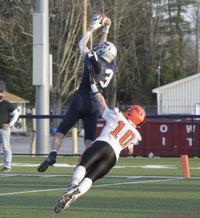 Mynderse senior wide receiver Nick Jones (3) leaps and catches what appeared to be a touchdown over Waterloo’s Devin Felber (10), but it was called back because of a penalty.

Mynderse junior Colin Ryan (21) strips the ball from Waterloo running back Kyle Slywka (20) just before he reached the end zone. The ball was recovered by the Blue Devils.

Mynderse senior wide receiver Nick Jones (3) leaps and catches what appeared to be a touchdown over Waterloo’s Devin Felber (10), but it was called back because of a penalty.

SENECA FALLS — Not a lot of people knew what to expect from Mynderse Academy when it hosted rival Waterloo at Bracht Field Wednesday night. A big reason for that: The Blue Devils did not start their season until last week due to a COVID-19 pause.

Prior to the contest, 17 Mynderse seniors were honored, a seemingly traditional senior night on a very non-traditional night for a high school football game.

Waterloo remained undefeated, but not before Mynderse made it very difficult for the Indians in their 14-12 victory.

“Anytime that you’re playing in a rivalry like this, and this goes back for years, you can throw records out the door,” Waterloo head coach Tyrone Thomas said after the Tribe improved to 4-0 with two regular-season games remaining. “Their kids played hard. Our kids played hard. We made some mistakes that helped stop some of our drives and helped them keep some drives alive.

“I want to give credit to Mynderse because they came to play. They moved the ball well and capitalized on some things.”

“We battled,” Mynderse head coach Joe Caraher said. “I told them in the first half I wasn’t very happy, but the second half, with the way we battled, I was real proud of them the way we bounced back. This is only second time that we’ve been on the field against somebody else, and we’re getting better.”

Following a Mynderse punt to open up the game, everyone got a glimpse of what this rivalry is about.

After Waterloo senior running back Kyle Slywka (66 rushing yards) ran for the opening touchdown on the Indians’ first possession, Mynderse junior defender Colin Ryan tackled Slywka to the ground aggressively. Slywka’s younger brother, Nolan, got in a shove of his own while defending his brother. The offsetting personal fouls were a wash, but game officials ejected the younger Slywka.

Waterloo led 6-0 after a quarter. Mynderse managed one first down in the opening period.

Oddi connected with Felber for the 2-point conversion and a 14-0 lead about six minutes before halftime.

Blue Devils sophomore Max Santana prevented his team from falling further behind by picking off Oddi in his own half of the field.

Oddi’s third interception of the game came in the final minute of the third quarter, when Mynderse junior Dylan Larizza returned the first of his two picks into Waterloo territory. On the next play, senior running back Jared Hartwell ran the ball 18 yards up the gut for the Blue Devils’ first score of the season. After a 5-yard penalty on the conversion, Hartwell’s point-after attempt was blocked.

Mynderse regained possession at its own 4 with about four minutes remaining. Junior quarterback Ethan Hilimire (13-of-21 passing, 252 yards) hooked up with Larizza (4 receptions, 145 yards), a junior wideout who made some slick moves in the middle of the field en route to an 96-yard touchdown. Suddenly, the home fans were thinking upset. However, Kyle Slywka batted down Hilimire’s 2-point pass to Jared King (4 receptions, 43 yards) in the back right corner of the end zone.

Waterloo failed to run out the clock, giving the Blue Devils one final opportunity. However, Waterloo junior Peter Shangraw IV intercepted Hilimire to seal the outcome.

“We were moving the ball on offense and we stalled out a couple of times. We were inside the 20 like twice and just stalled out, so we have to do a better job with that,” said Thomas, whose team hosts fellow unbeaten Bath Haverling on Tuesday. “We have to fix some things defensively. I thought we let them go over the top a few times; we didn’t get enough pressure on the quarterback. All those things we need to improve on, but we’ll always take a ‘W’ when we can.”

After getting shut out 20-0 by Penn Yan/Dundee in its Week 3 opener, Caraher was pleased his team made strides.

As for Caraher’s goal: “Win two games. Sectionals are probably out. The best that we can do is .500, and that’s not going to get you in. I just want to win two games, get better each day, and, who knows, maybe we can sneak in.”