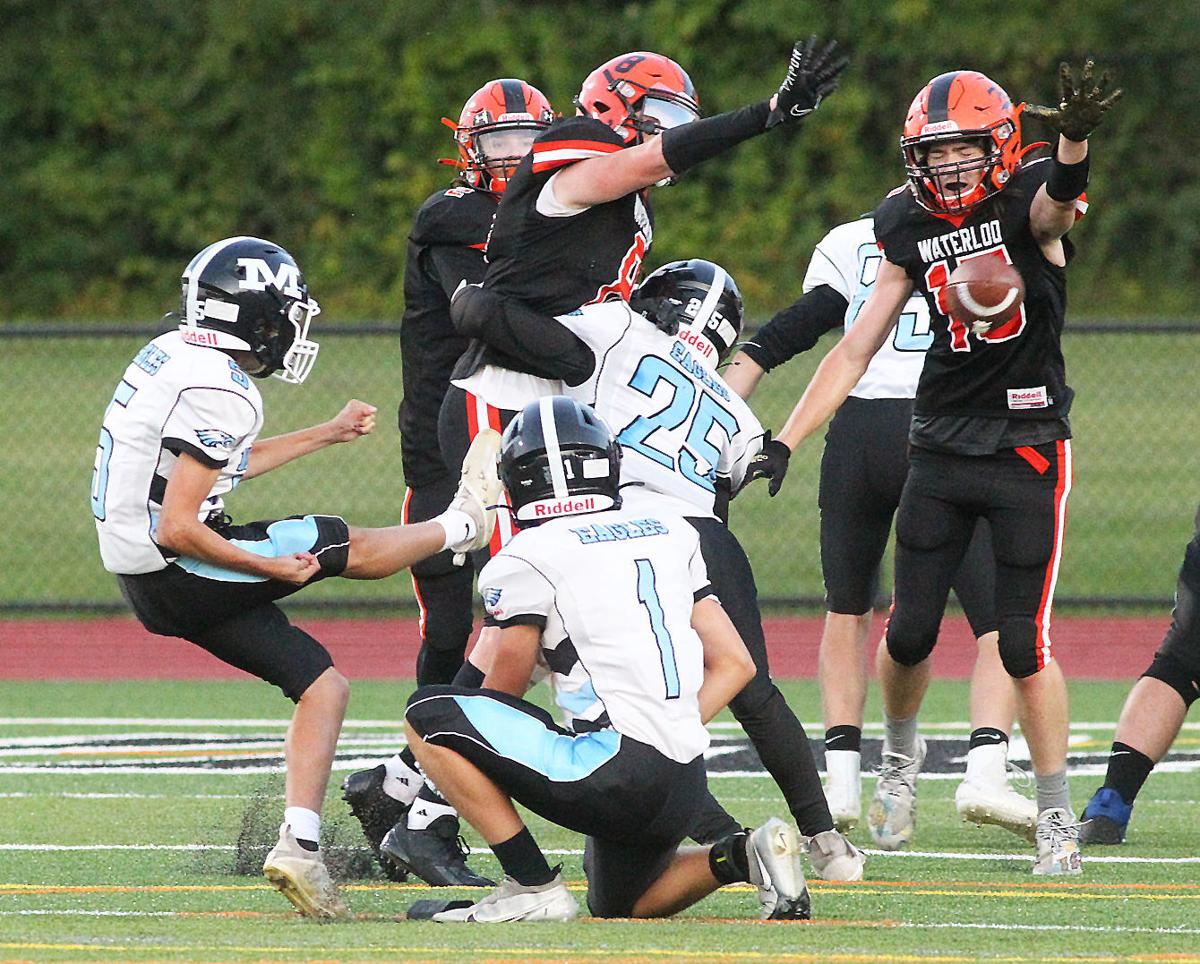 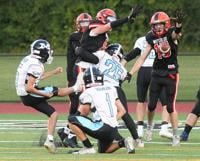 After one of their several early scores, Midlakes’ extra point attempt ended up being blocked by Waterloo’s special teams unit. 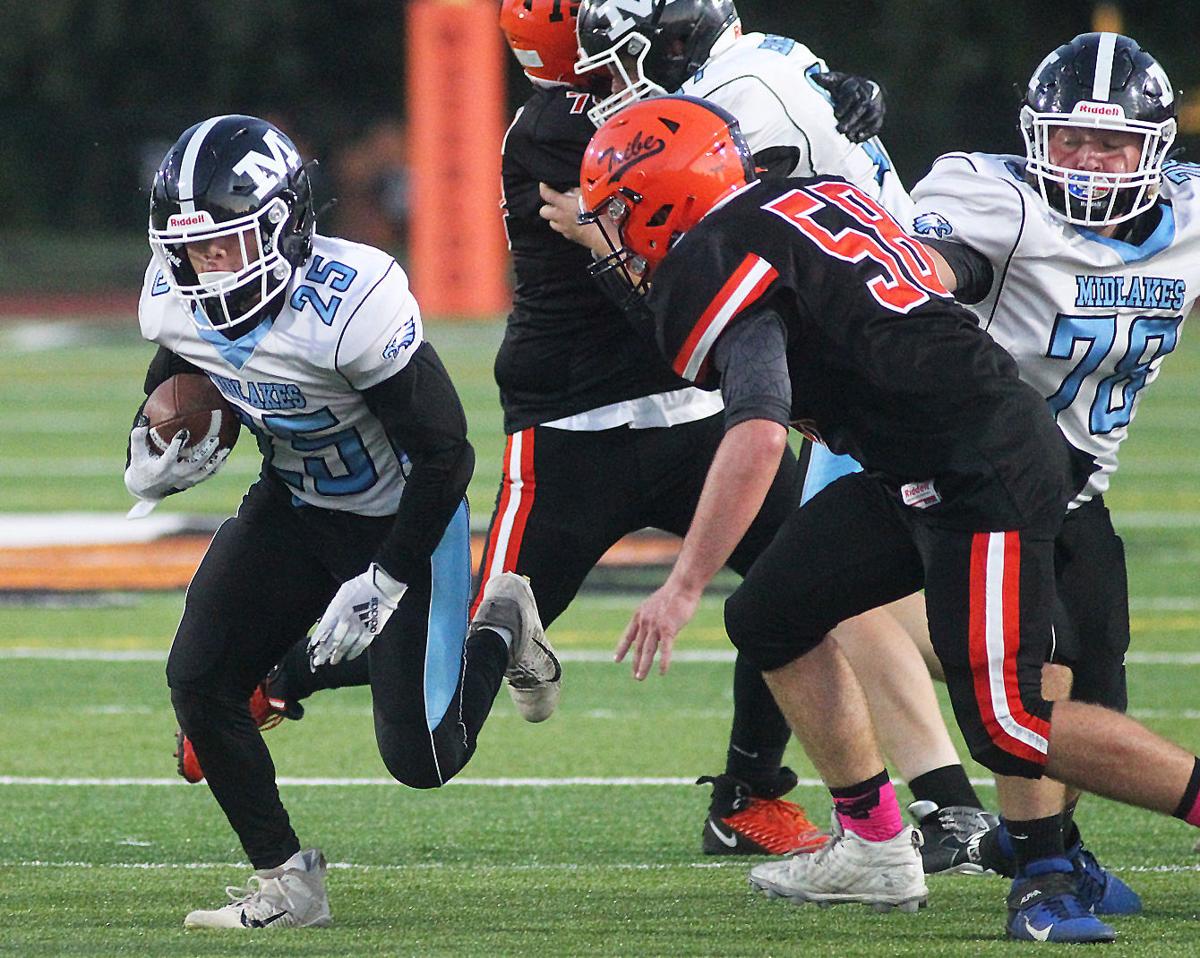 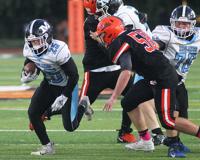 Midlakes senior running back Ryan Peck (25) sprints through a hole for a solid gain before being tackled by Waterloo’s Deakyn Hughes (58).

After one of their several early scores, Midlakes’ extra point attempt ended up being blocked by Waterloo’s special teams unit.

Midlakes senior running back Ryan Peck (25) sprints through a hole for a solid gain before being tackled by Waterloo’s Deakyn Hughes (58).

WATERLOO — Given that the Midlakes Screaming Eagles were a one-win team in the Fall II season last spring and the Waterloo Indians made it to the sectional semifinals, it would have been difficult to predict the lopsided final outcome of Friday’s game.

The Dave Whitcomb-led Midlakes squad took it to Waterloo the entire game in front of a packed house at Tom Coughlin Stadium, routing the Indians, 39-0.

“I’m just really proud of our kids,” Whitcomb said afterwards. “We worked hard all offseason, we had a terrific preseason. The good thing was that the kids responded this week. I know (Tyrone Thomas) is a little undermanned right now but I’m just happy and proud of these guys. They won the game.”

The Screaming Eagles (1-1) produced a six-minute-plus drive to open the game as Midlakes senior running back Ryan Peck ran up the gut on a 4th-and-1 inside the Waterloo (0-2) red zone line and put his Screaming Eagles up 7-0 after the extra point by sophomore kicker Kaiden Larsen.

Mulvey-Salerno threw up a desperation ball that was picked off by Midlakes junior free safety Tyler McCarrick, who took it to the house for a pick-6 and a 13-0 Screaming Eagles lead.

McCarrick continued his strong night on the ground as well.

On the next Midlakes offensive possession, he scampered left to right and as the first quarter buzzer sounded, he crossed the goal line for a 22-yard rushing touchdown and a 19-0 lead.

“We didn’t execute the game plan,” Waterloo head coach Thomas said after the game. For the second week in a row, Thomas lost his starting running back in middle of the game to injury. “When we lost Julian (Pehrson) we had to move a bunch of pieces around to kind of fix things and make them work. We weren’t able to do that today.”

The second quarter began for Waterloo much like its first possession of the game. Less than 30 seconds in, Waterloo fumbled the ball. Midlakes junior linebacker Mason DeSain scooped up the loose ball and soon after, McCarrick rushed for another touchdown and a commanding 27-0 Midlakes lead, putting the game away.

“We have to focus to get a game plan together to move forward here,” Thomas added.

Whitcomb has now 219 career wins as a Section V head coach but Friday’s night latest win was definitely one for him to remember.

“It ranks up there because of where we were at, where we’re coming from,” Whitcomb said. “When you start to have more success, the wins come easier and more often. It means a lot to see these kids do what they did.”