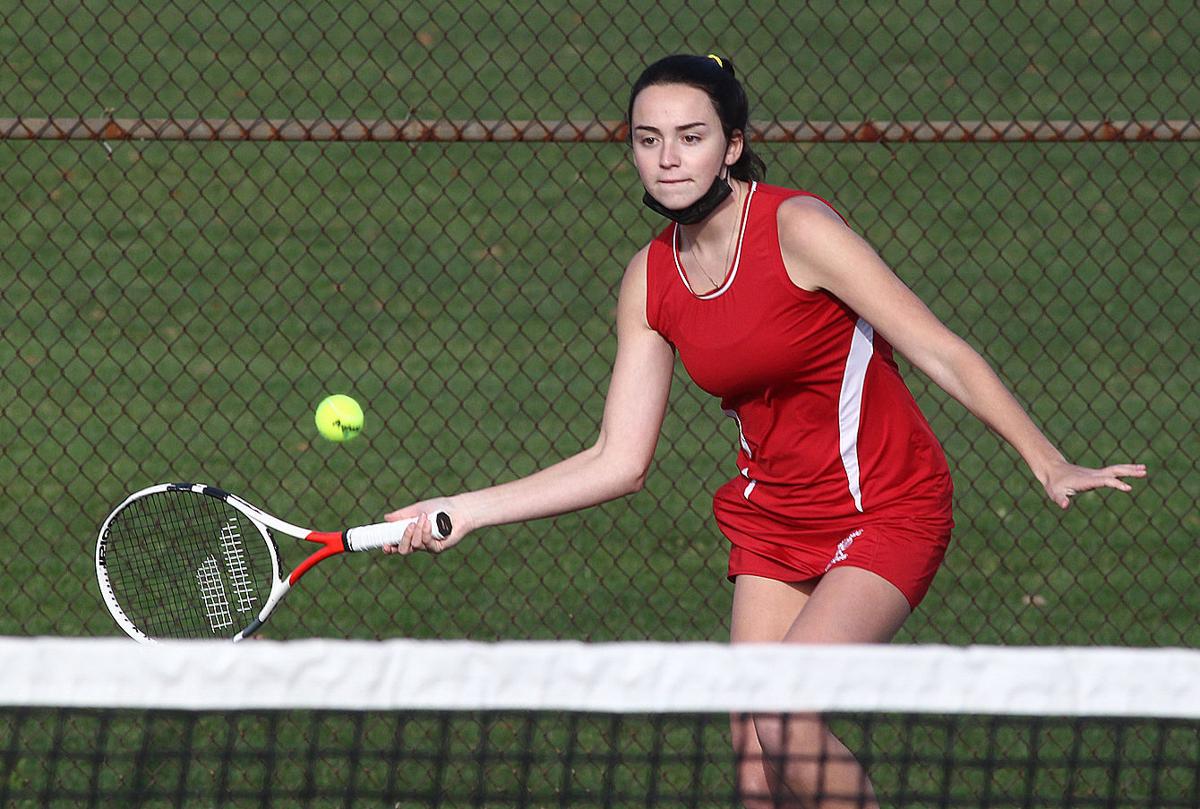 Top: Pal-Mac No. 2 singles player Alea Javorowsky hits a forehand against Marcus Whitman’s Kaitlyn Hopper. Javorowsky came away with the win, 10-8. Below: Marcus Whitman’s Caty Goodman eyes down the ball on her way to hit a backhand. Goodman played in the No. 1 singles slot and won her match 10-3. 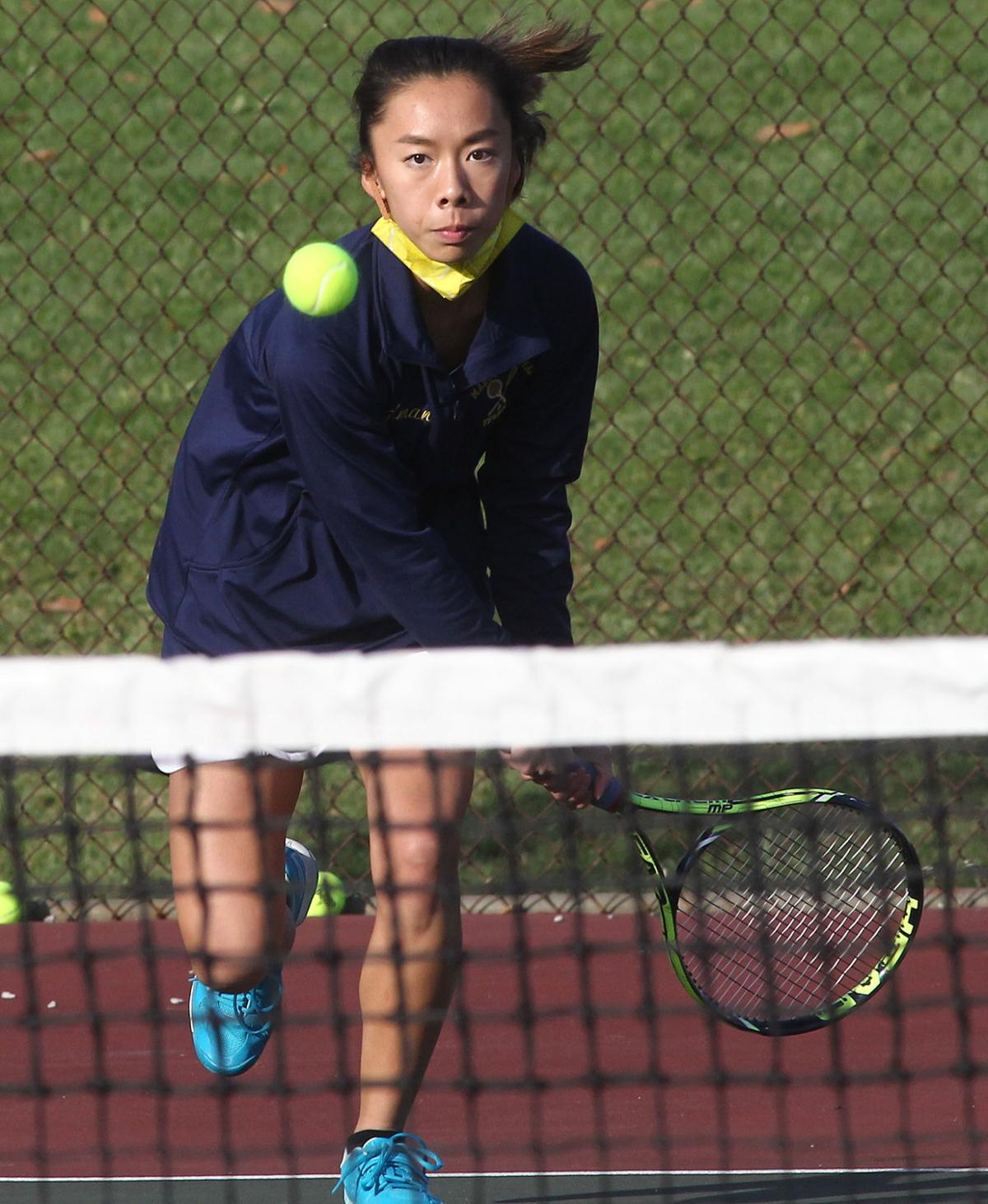 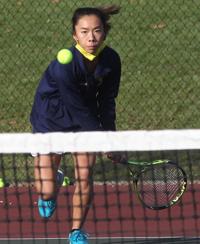 Marcus Whitman’s Caty Goodman eyes down the ball on her way to hit a backhand. Goodman played in the No. 1 singles slot and won her match 10-3.

Top: Pal-Mac No. 2 singles player Alea Javorowsky hits a forehand against Marcus Whitman’s Kaitlyn Hopper. Javorowsky came away with the win, 10-8. Below: Marcus Whitman’s Caty Goodman eyes down the ball on her way to hit a backhand. Goodman played in the No. 1 singles slot and won her match 10-3.

Marcus Whitman’s Caty Goodman eyes down the ball on her way to hit a backhand. Goodman played in the No. 1 singles slot and won her match 10-3.

GORHAM — The end of the regular season arrived out of thin air, and while Penn Yan claimed another the Finger Lakes West title, the Finger Lakes East title will at the very least belong to Palmyra-Macedon.

The Red Raiders (7-3, 7-3) used a strong performance on Wednesday night against Marcus Whitman (7-3, 7-3) to win the match 4-1 and claim at least a share of the Finger Lakes East title.

“I think as the year’s gone on we have really improved steadily,” Pal-Mac head coach Tane Robinson said. “Players have been working hard and definitely gotten better with each match and we seem to be putting it all together at this time.”

“I’m super proud,” Marcus Whitman head coach Bryan Law said on his team’s performance over the course of the season. “I’m super proud that we’re 7-3 and the only team’s we lost to was the number one team in Penn Yan and the number two team in Mynderse. I’m very proud of their efforts.”

At the No. 1 singles position, Marcus Whitmans Caty Goodman faced Pal-Mac’s Heather Weaver. Goodman used her strong and consistent backhand along with a few power forehand’s to cruise to victory. Weaver’s strong serve and forehand were not enough and Goodman’s 10-3 victory gave her team it’s first win on the day.

Unfortunately for the Wildcats, that would be the lone victory.

With win over Washington, Packers ‘feel good’ about where they’re at — but know challenges loom

Pal-Mac’s Aussie Hager defeated Evelyn Bergstresser at the No. 3 singles slot 10-4. Hager utilized solid returns off serve to jump out to an early 6-0 lead. Bergstresser managed to mount a minor comeback and won four games but could not keep Hager from winning.

Despite the match having been already decided in Pal-Mac’s favor, the No. 2 singles slot provided the match of the day. Pal-Mac’s Alea Javorowsky and Marcus Whitman’s Kaitlyn Hopper exchanged blows the entire match. Just when it seemed one player would take a commanding lead, the other fought tooth and nail to keep it close.

“It was a match where she needed to stay really steady the entire time,” Robinson said of Javorowsky. “She just did a nice job of not allowing the intensity of the match get to her. She stayed nice and steady.”

Javorowsky was forced to fend off powerful forehands from Hopper the entire match. Hopper’s power was matched by Javorowsky’s ability to not only get to near every ball, but to put in back in play with few unforced errors.

Hopper found herself down 3-1 early but she found her forehand rhythm and clawed back to take a 5-4 lead. Javorowsky kept grinding away defensively and played the long game, waiting for her opponent to make a mistake before she did.

That tactic proved fruitful for Javorowsky and she came away with a 10-8 win in the final match of the day.

“I think today was a little bit mental,” Law said of his team. “We had a long match last night versus Geneva and they were going to be tired. We have sectionals coming up on Saturday and I want to bring the strongest team possible to sectionals.”