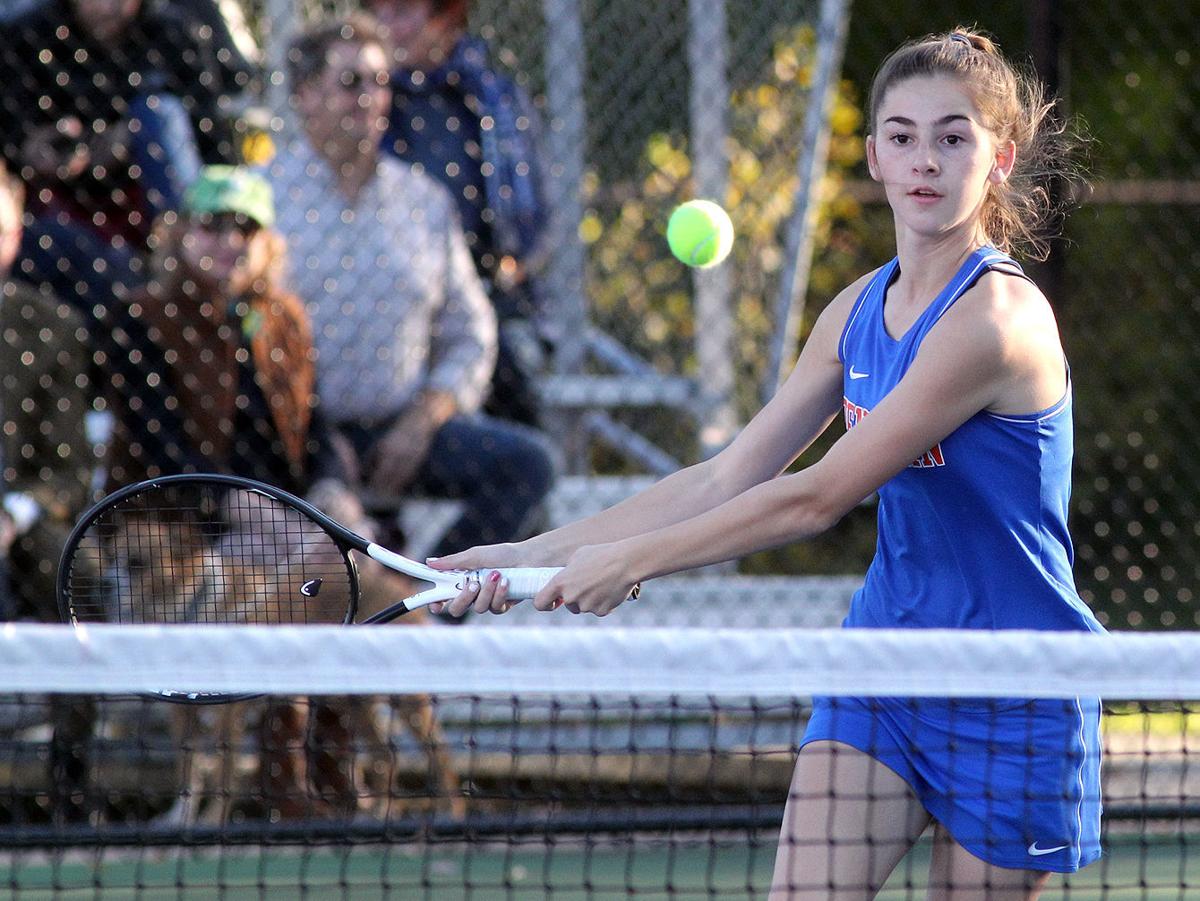 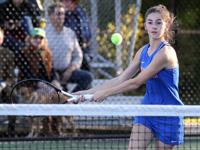 Jayden Hollister prepares to strike the ball back to HAC’s Elizabeth Nicosia and Victoria Edwards. Hollister and her partner Sydney Moravec won the first doubles match by set scores of 6-1 and 6-4. 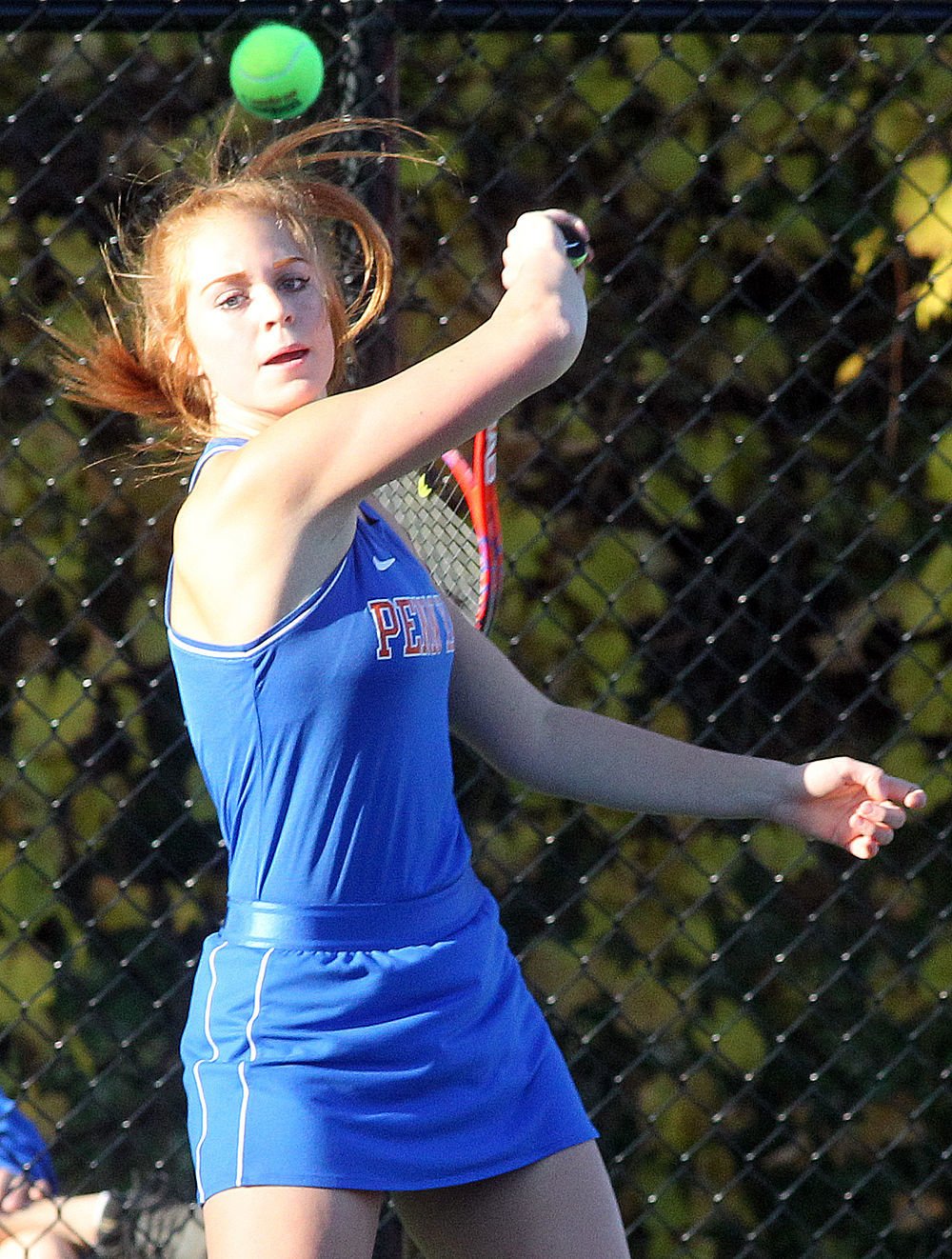 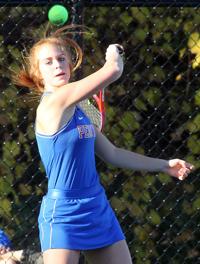 Junior Claire Pullen delivers the ball back over to Ava Gouvernet in the No. 2 singles match. Pullen won with set scores of 6-1 and 6-1. 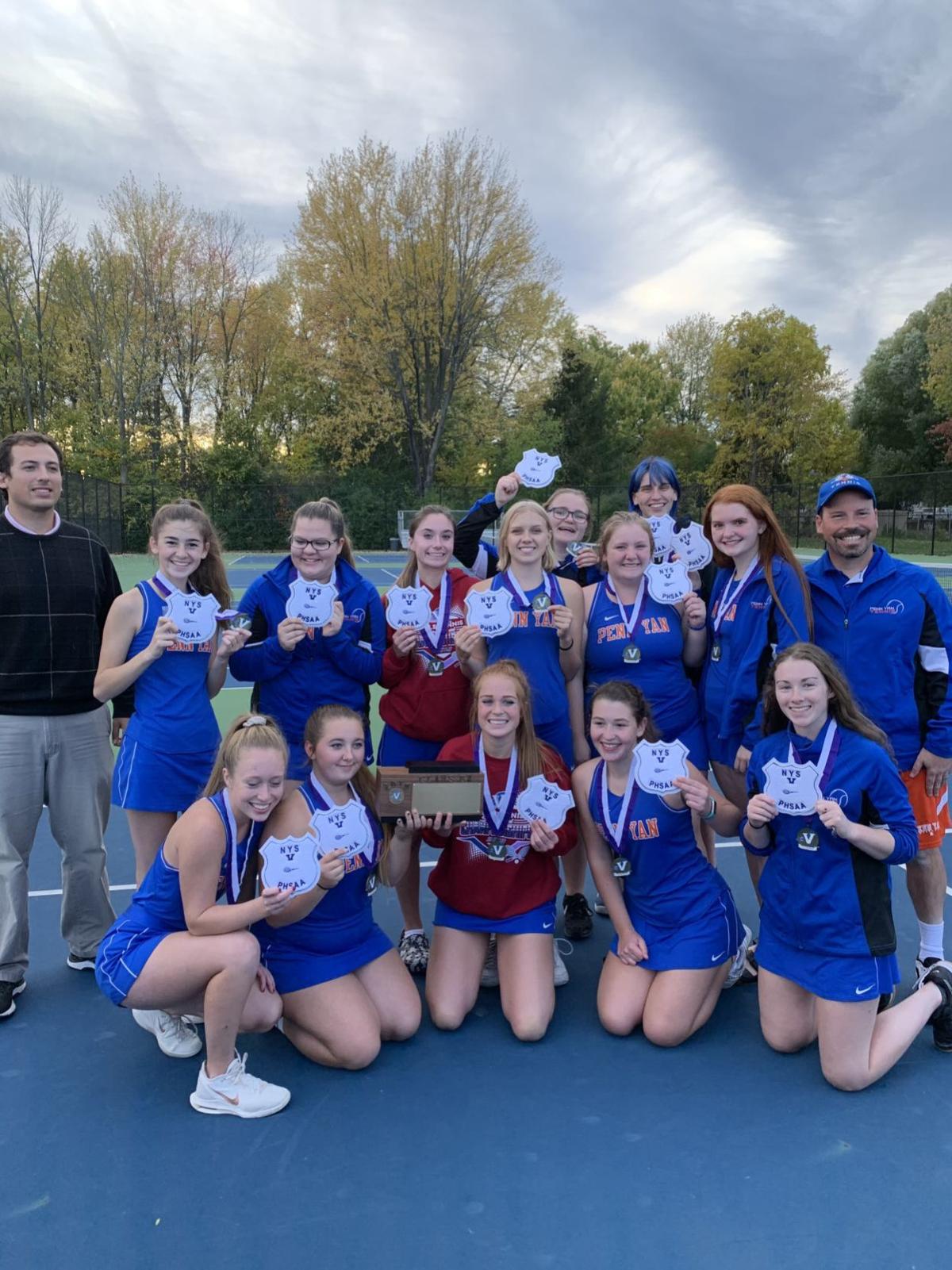 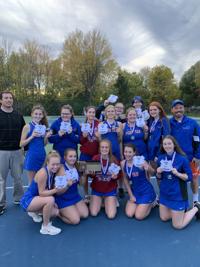 The Mustangs pose with their Section V medals following their victory over HAC.

Jayden Hollister prepares to strike the ball back to HAC’s Elizabeth Nicosia and Victoria Edwards. Hollister and her partner Sydney Moravec won the first doubles match by set scores of 6-1 and 6-4.

Junior Claire Pullen delivers the ball back over to Ava Gouvernet in the No. 2 singles match. Pullen won with set scores of 6-1 and 6-1.

The Mustangs pose with their Section V medals following their victory over HAC.

CANANDAIGUA — Teams always remember tough losses, but when teams lose just one match out of 15, that single loss sticks out all the more.

It was a case of good, old-fashioned revenge as the Penn Yan Mustangs defeated Harley/Allendale-Columbia to win the Class B2 Section V Championship on a chilly Monday evening at Canandaigua Middle School by a score of 4-1.

Entering the match, the two teams each had one loss on the year. Penn Yan’s overall record was 13-1 before play began, with their one loss coming on September 19th to HAC.

The loss must have motivated the Mustangs, because they were firing on all cylinders as they clinched the win against HAC in four matches.

“This is what they get when they work as hard as they have,” Penn Yan coach Nate Kraemer said after the victory. “During the summers, they go out to Pal-Mac, they come to our courts, they keep hitting on their own and it pays off during the season and all that hard work led them to this point.”

The championship featured interesting matchups up and down. At the no. 1 seed, three-time doubles champion Molly Pullen played HAC’s Anastasia Gubanova. The Division I-bound Gubanova beat Molly 6-1, 6-0 to go undefeated on the year.

The rest of the matches would be won my Penn Yan.

Molly’s sister and fellow doubles champion, Claire, won 6-1, 6-1 vs. Ava Gouvernet at the no. 2 slot, Abigial Garvey beat Sophia Carling 6-2, 6-0 and the two doubles teams of Jayden Hollister, Sydney Moravec and Sam Denson, Grace Worth won their matches. The clinching match was won by Hollister and Moravec 6-4, 6-1.

Though HAC did not manage to win a set outside of the no. 1 seed matchup, the scores were much closer than indicated.

“HAC came out really tough. We were just a little tougher,” Kraemer said. “Even though the set scores looked the way they did, I felt like a lot of the games went to deuce. It was really close and could have gone either way, but we played really hard, they played really hard and we were fortunate to come out (on top).”

With Gubanova taking the first match of the day and giving the lead to HAC, Penn Yan had to battle to win the rest of their matches, and that is exactly what they did.

In the no. 2 slot, Claire Pullen had to battle against Ava Gouvernet, who hit the ball consistently and seemed to put everything in play. Calire stayed composed and swung with authority when she needed to in deuce and advantage situations to pull out the victory.

Abby Garvey played HAC’s Sophia Carling at no. 3 and played solid tennis to win the first set 6-2. In the second set, Carling rolled her ankle and her mobility was immediately effected. Despite the injury, she continued to play and finished out the match.

“Sophia tweaked her ankle and she battled through,” HAC coach Raj Singaravelu said after the match. “I asked her, I said ‘health is the most important thing. Do you want to be out there?’ and she said ‘I want to finish.’ So I am proud of her for competing and sticking with it. She finished the match, which shows a lot about her character.”

With Claire Pullen and Garvey pulling out gutsy wins, it was all up to the doubles teams of Hollister/Moravec and Denson/Worth. Each team was up a set, and it came down to a matter of who would finish first.

Hollister and Moravec were down in the second set by two games and battle back to win the set and the championship for Penn Yan and avenging their lone loss on the season.

“They played with a lot of heart,” said an emotional HAC head coach Raj Singaravelu after the match. “Throughout the season they battled, competed and played well. They have made enough memories that they can carry with them, and they’ll learn from this.”

While Penn Yan won the Section V Championship last year in Class CC, this is their first in Class B2, and given the circumstances and strength of their opponents, it seems like this is the sweetest one yet.