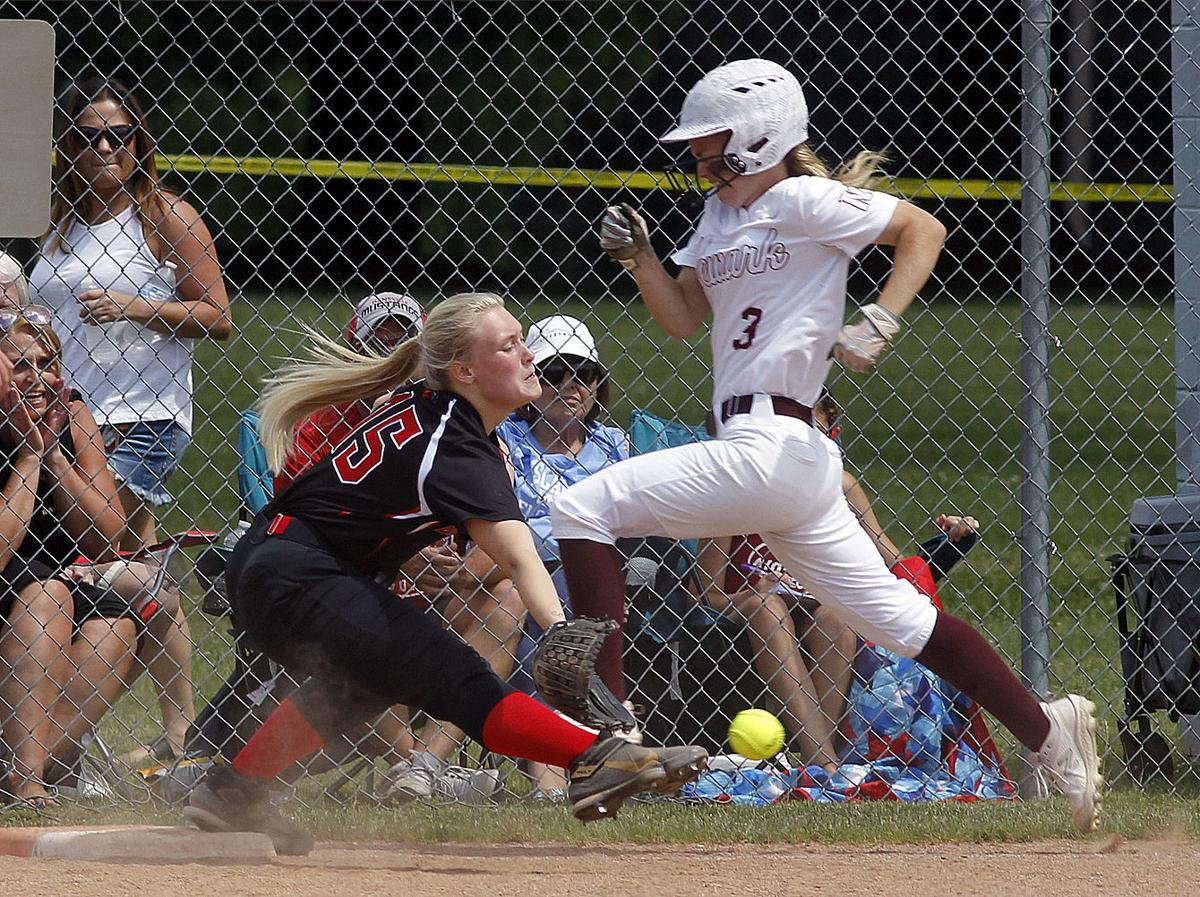 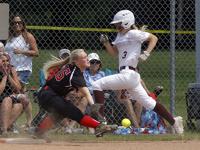 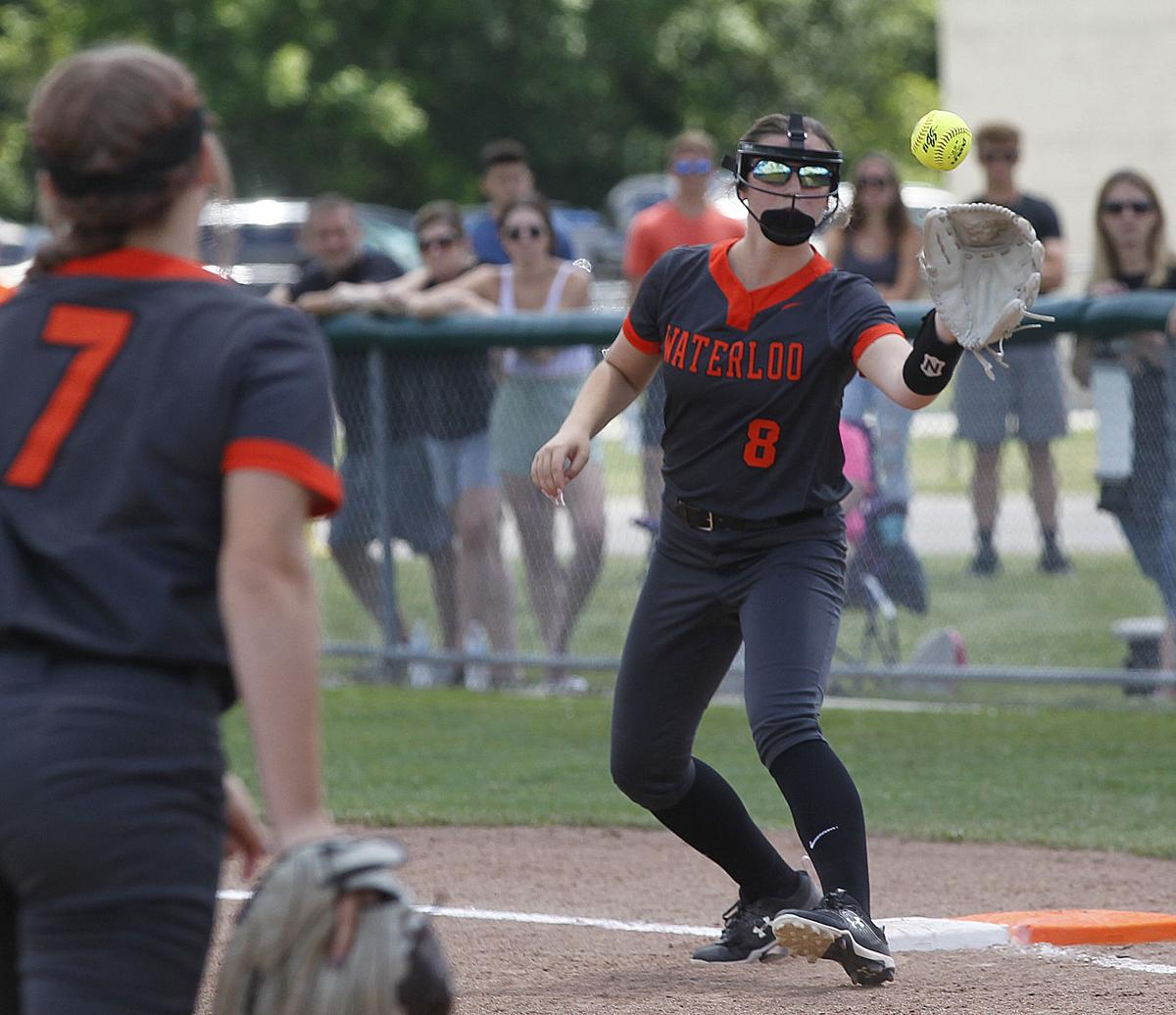 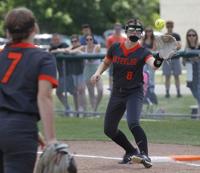 Waterloo pitcher Makayla Jensen (7) handles a groundball and fires a throw to first base to get the runner. Jensen will start on the mound Monday night. 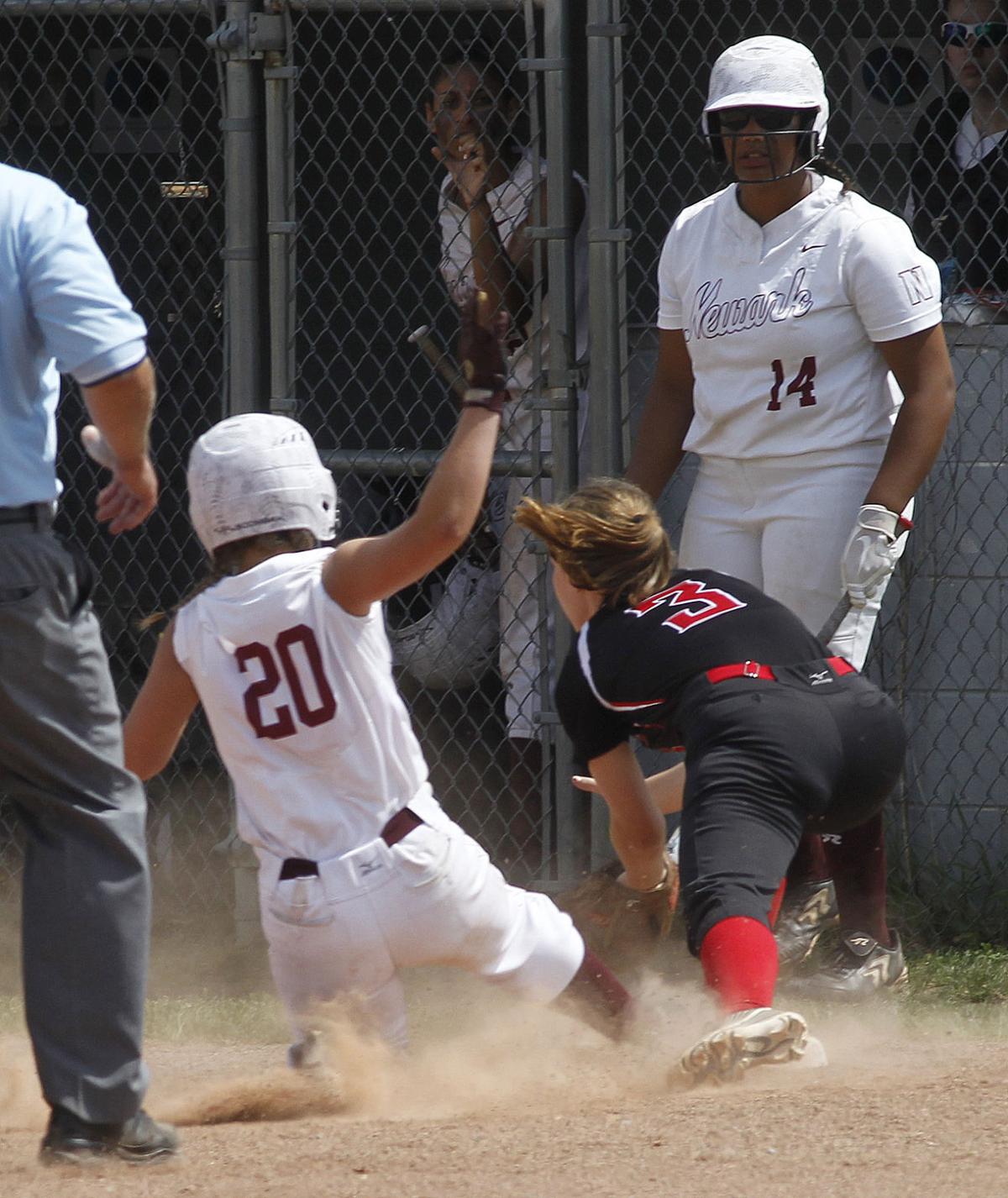 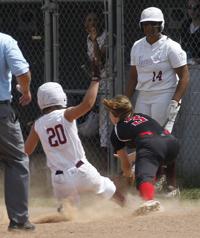 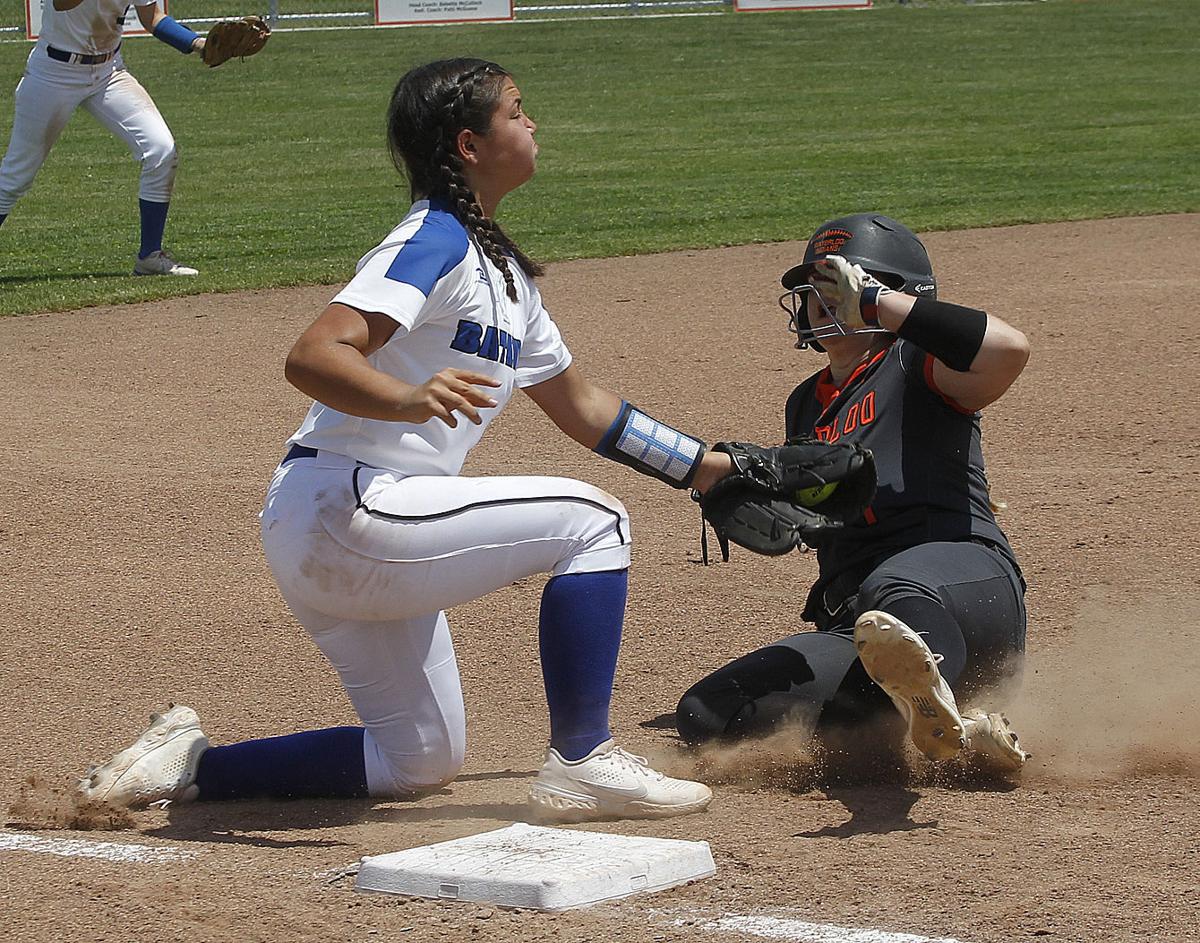 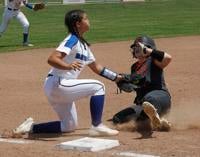 Waterloo sophomore Kennedy Beniamino (1) was called safe as umpire felt she beat the tag during Saturday’s semifinal game against Batavia which Waterloo won 7-5.

Waterloo pitcher Makayla Jensen (7) handles a groundball and fires a throw to first base to get the runner. Jensen will start on the mound Monday night.

Waterloo sophomore Kennedy Beniamino (1) was called safe as umpire felt she beat the tag during Saturday’s semifinal game against Batavia which Waterloo won 7-5.

WATERLOO — In 2019, Waterloo and Newark softball played against one another in the Class B crossover game with the winner advancing to the state tournament. Newark, Class B1 sectional champions, fell 5-3 to Waterloo, the Class B2 sectional champs.

Two years and one pandemic later, the programs will meet in the B1 Section V title game today at 7 p.m., only this time, it’s for all the marbles; no crossover matchups, no state final four, no state title. The Class B1 sectional championship is the final game of the year for Waterloo and Newark, two of the premier programs in Section V.

The Waterloo Indians (17-2) decided to get their 2021 losses out of the way early. Since starting out 0-2, the Tribe launched themselves on a 17-game heater, outscoring opponents 214-84. In 19 games, the Kierstyn Decory-led squad has scored 10-plus runs 12 times and reached 20-plus twice.

“As coaches, we weren’t pointing it out for a long time,” Decory said on the win streak. “But everyone else is now, so now we have to roll with it. In ‘19, we went to states and didn’t even have that type of win streak going.”

In the midst of their torrid streak, Decory called up eighth grader Maddie Westerberg, which turned out to be like adding a turbo charger to the operation. Westerberg fit right in with the varsity squad. In just a few games, she has hit lights out with a grand slam against Hornell in the sectional quarterfinals and three RBIs against Batavia in the semifinals.

“She played on junior varsity and gained a lot of confidence,” Decory said of Westerberg’s start to the season. “I knew she was a gamer from the beginning, but I didn’t know she was ready to be on varsity. She’s my starting shortstop now.”

On Saturday, the Indians faced a talented Batavia team and came away with a 7-5 victory.

“Their record did not reflect what that team was, 100%,” Decory said of Batavia. “Every single team they played was (Class) A except when they played Midlakes. We knew going in they were going to be a good team.”

Waterloo came out hot right from the first pitch and hopped on the scoreboard quickly and set the tone early. As soon as Batavia scored, Waterloo answered and the Tribe was able to keep the Blue Devils at bay.

On Monday, Decory expects to start junior Makayla Jensen, who has been a rock on the mound all season.

“Makayla will definitely start on the mound for us,” Decory said. “She’s been our pitcher all year that we go to. She’s held us together when it comes down to it. She’s got good placement and puts the ball exactly where we tell her to put it.”

In the other dugout is Newark, which has had a strong season as well. The Reds (13-6) have outscored opponents 206-67. Pitchers Tia Brown and Annabella Phillips represent a deadly 1-2 combo.

In a 10-2 victory over Dansville in Saturday’s semifinal, Brown allowed two runs in the bottom of the first and then settled in for the remainder of the game, allowing just five total hits and two walks while striking out eight batters.

Brown found herself in a bit of trouble in the fifth inning allowing back-to-back hits and a walk to load the bases. After a timeout, Brown was asked if she needed help or was going to get herself out of the jam.

“I’m getting myself out,” Brown responded.

The next two pitches turned into two outs and the next three pitches led to a strikeout.

“Tia’s just Tia,” coach Jose Otero said. “She comes in and wants to be dominant and is not happy unless she is dominant.”

The other stud starting pitcher for Newark is Phillips, but what will cause trouble for Waterloo is that if Brown or Phillips is on the mound, the other is undoubtedly leading the offensive charge. At the plate against Dansville, Phillips went 3-for-4 at the plate, scored three runs, belted a home run and drove in four runs.

Otero did not confirm who would get the mound to start the game but emphasized the confidence he and the team have in both Brown and Phillips.

“We’re real lucky to have two quality pitchers that we can go back and forth with,” Otero said. “Either one of them on the mound gives our team a lot of confidence ... but as far as who’s going to take the mound tomorrow, we’ll have to wait until game time to see who that is.”

The two teams met twice in the regular season and Waterloo took both, 6-3 and 7-6.

“It’s a different set of emotions that come into play when we play Waterloo,” Otero said. “They’re a tough team to beat, they always have been and they’ve earned that reputation. It’s our job not to let that reputation dictate how we’re going to play.”

Newark has scored 45 runs this month and 26 in the postseason. With the addition of Westerberg on Waterloo’s roster it may not be out of the question to see an offensive shootout in the championship game.

With so many teams making up the different classes of Section V, a championship matchup between to teams in the same regular season league is not only a rare occurrence, but a treat for the fans and fuel that make local rivalries so precious to their communities.

But don’t get it twisted, these teams will bring everything they have tonight.