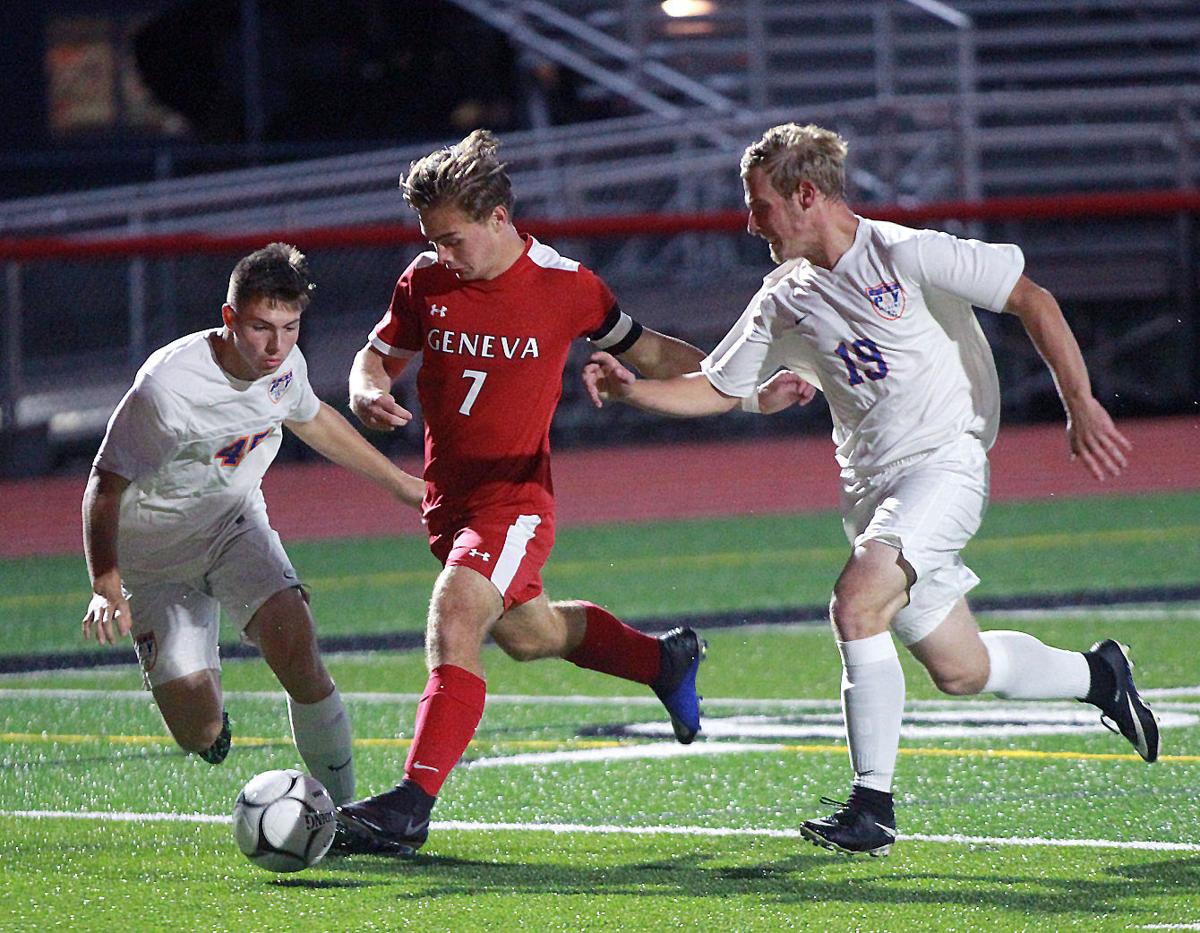 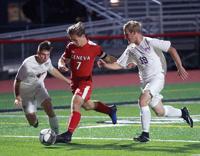 In this file photo from the 2019 season, Geneva’s Mason Rusinko (7) weaves his way between Penn Yan’s Daytona Bailey (45) and Reid Castner (19) in a classic Finger Lakes East matchup at Loman Stadium. Soccer has been one of the sports permitted to play this fall. 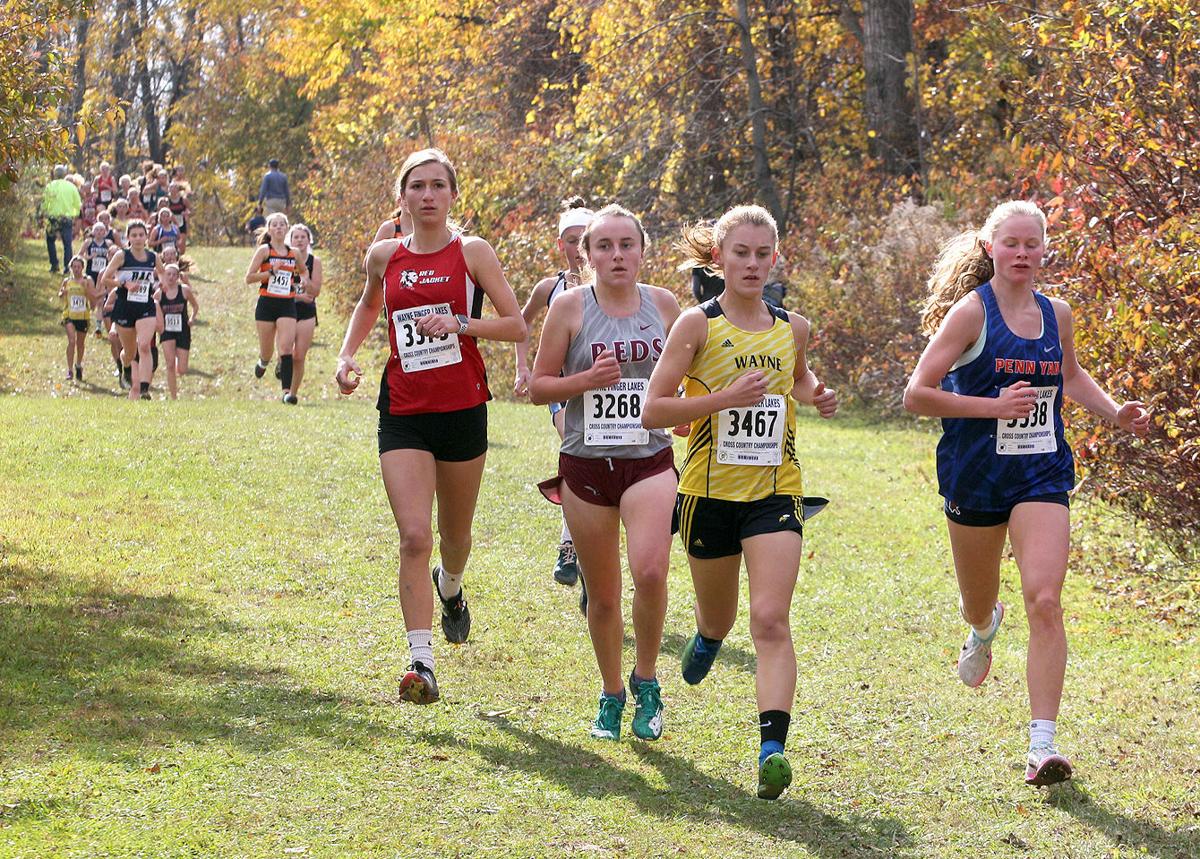 In this 2019 file photo, runners from schools across the region competed in the Wayne-Finger Lakes Cross Country championships last fall.

In this file photo from the 2019 season, Geneva’s Mason Rusinko (7) weaves his way between Penn Yan’s Daytona Bailey (45) and Reid Castner (19) in a classic Finger Lakes East matchup at Loman Stadium. Soccer has been one of the sports permitted to play this fall.

In this 2019 file photo, runners from schools across the region competed in the Wayne-Finger Lakes Cross Country championships last fall.

GENEVA — It may not be perfect, but fall in the Finger Lakes will have sports.

Girls tennis, boys and girls soccer, boys and girls cross country, field hockey, and girls swimming have been green-lighted to have a season. The Finger Lakes plays golf during the fall, also; there was no official word as of press time if golf would be given the go-ahead too.

Also, boys and girls volleyball were not included in Cuomo's announcement.

According to the announcement, the governor plans to meet with the executive directors of each of the state’s 11 sections, as well as NYSPHSAA’s CVOID-19 Task Force, to review specific guidance. Those meetings begin Tuesday.

The higher-risk sport of football has been restricted to just practices and no play as yet. As of now, winter sports such as ice hockey and wrestling also fall into the “higher-risk” category.

An additional restriction for the sports given the go-ahead to play is that they must play teams within their own region/county until Oct. 19. At that point, the situation we be re-evaluated, according to the governor.

The last game played in the Finger Lakes was Geneva boys basketball’s state play-in win over Avon March 11. If games begin right on Sept. 21, it will be 194 days between contests.

Snow to pile up in Northeast as winter storm barrels through

For a team like Geneva varsity boys soccer, the news of a season is most welcome, despite the initial lack of specifics and stipulations.

“We’re super excited,” Panthers head coach Jeff Dunham said about the upcoming season. “I’m happy for these kids. They spent a long time sitting inside, and they are ready to go.

“We’ve been planning. The kids have had workout routines and we’re gonna start to get together for informal pickup (soon). I had a Zoom meeting at the end of the school year and gave everyone a workout plan, and I really left it up to my senior leaders such as Mason Rusinko, Jordan Myer. They made sure (their teammates) were on top of it.”

Given how special of a run the Panthers had in 2019 — they made it to the Class B1 sectional final before falling to Palmyra-Macedon — recapturing the magic for this year may have been a challenge in a pandemic-free season, but with all that has happened in the past six months, Dunham anticipates his players will have more energy and spring in their step than ever before.

“I think certainly the kids are going to be champing at the bit,” Dunham said. “Our goal this year is to be as competitive as possible and get another chance at a sectional championship. It’ll be challenging, but it’s challenging every year, and our senior leaders know what it takes and what kind of effort is needed to be champions.”

Though Dunham, along with practically every coach, player and fan, was unsure about the season happening, the green light to play doesn’t just carry weight for the players and coaches on the field, it’s an uplifting moment for anyone that cherishes sports nationwide.

“I have to be honest. I was uncertain,” Dunham said about the upcoming season. “Obviously, with the delay until the 21st, that made me nervous, but as the days go on and the (infection) numbers stay low across the region, that was encouraging.”