Myles Silverman of Hobart (Class of 2019) poses with his board and two medals after competing in snowboard slalom and giant slalom at the Collegiate Ski and Snowboard Association (USCSA) National Championship. The competition was held at Whiteface Mountain in Lake Placid on March 5-10 and included 527 athletes. 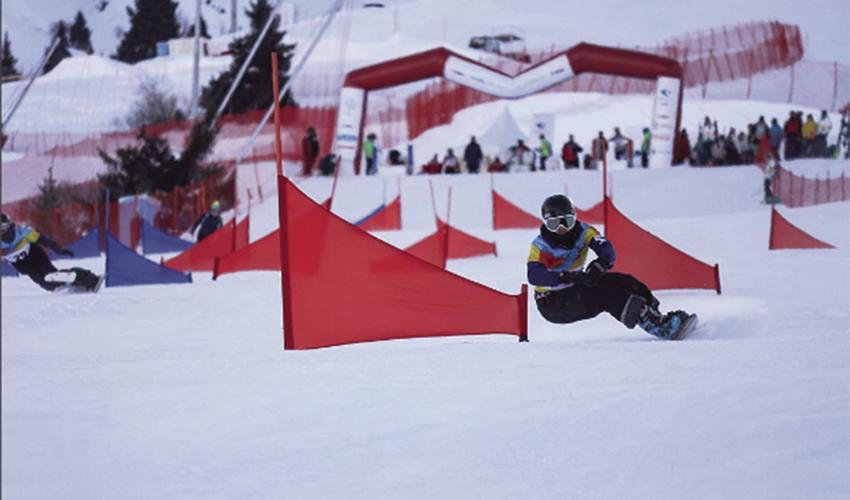 Myles Silverman of Hobart (Class of 2019) poses with his board and two medals after competing in snowboard slalom and giant slalom at the Collegiate Ski and Snowboard Association (USCSA) National Championship. The competition was held at Whiteface Mountain in Lake Placid on March 5-10 and included 527 athletes.

GENEVA — You see them in the starting gates. High on top of the slopes, overlooking mountains that are as treacherous to navigate as they are visually stunning. As they hold on tight to their instruments of speed, skiers and snowboarders alike, what they see is a paradoxical world that is all their own.

One that is both predictable and untamed all the same. They have practiced and trained for these moments for years. The mountain itself has been groomed and manicured, and its weather forecasted.

Still, every race on these instruments of speed faces the same unpredictable merger between human ambition, earth, and mother nature, that every generation of outdoor sportsmen and sportswomen have undertaken.

It is much more than thrill seeking. It is a journey of self-discovery and improvement, and shared experiences that for this elite group of snowboarders and skiers is all their own.

“You can’t take away those experiences from me,” said Hobart College junior snowboarder Myles Silverman. “There are so many places, people, friends, and experiences that I’ve had that I couldn’t have imagined of had it not been for how much I’ve dedicated to the sport of snowboarding.”

On many winter afternoons in the coastal New England college and fishing town of Brunswick, Maine, Silverman watched and read about the great feats of skill and endurance that captivated many other kids, all watching the Turin and Vancouver Winter Olympics.

“Me and my dad both skied when I was little,” said Silverman. “We then heard of some local events for snowboarding,” and so began the first chapter in a story that is all family and all snowboarding.

After winning his first national championship for his age group in the fifth grade in Steamboat Springs, Colorado, he reached the summit again, winning five more national titles. Being named to the US Snowboard Racing Team (USSRT), contending in world junior championships and national collegiate championships have never taken Silverman’s eyes off that which means most to him.

“Be good, do well, and have fun,” Silverman recalls his father always telling him. “My dad always gives me the best advice.”

“While everything that has happened to me recently has been great, I know that it’s not about the destination,” said Silverman. “It’s the journey. If I don’t ever make the Olympics I will still be very happy because snowboarding has given me so much and some of the greatest memories of my life.”

Like the grandest mountain ranges, life is made more whole with its peaks and valleys. “Traveling is great” and it has taken him across the world, placed him situations of adversity, and introduced him to new goals and ambitions.

After days of snowboarding by his father’s side and his childhood friends in southern Maine, Silverman moved to attend boarding school in Colorado (Steamboat Mountain School) and began charting his own path.

A few years ago, in 2016, Silverman loaded a suitcase “and traveled by myself to Chile, my favorite place, to train with other snowboarders.” At times it has been a very independent lifestyle, from his time spent competing in Kazakhstan to his college beginnings.

Without a men’s college ski or snowboard team, Silverman “persuaded some people at the Colleges to let me compete and travel with the William Smith ski racing team as a snowboarder. My hope is to help establish a ski racing team or club at Hobart some day.”

Through it all, including his time now spent as a student at Hobart, “my family has and will always do whatever they can for me and they see what it takes,” said Silverman. “It is tough and trying for them at times because of the injuries and their concern but, my family has always been supportive.

“Competing at this level is a tough thing to explain,” added Silverman. “But, I know that for my parents, more than anything else they want to see me grow and be a good person and treat everyone with respect and kindness.” A comfort zone at home has helped mightily in his pursuit of an Olympic dream.

When Silverman was a junior in high school he suffered a serious concussion.

“I was out of competition for a year and came back in 2015 to make the U.S. Team and compete in World Junior Championships,” said Silverman. This was followed by a broken foot and another comeback to the world stage.

The résumé most notably began in 2010 when he was named to a top 10 list for Sports Illustrated SportsKid of the Year. In 2015 Silverman achieved a top three ranking of male snowboarders under 20 at the FIS Junior World Championship at Yabuli in Harbin, China, where Silverman was one of three snowboarders to represent the US.

In 2016 he competed in Junior Worlds in Rogla, Slovenia, and in 2017 he represented his country and Hobart at the World University games in Kazakhstan and in the junior worlds in Klinovec, Czech Republic.

Most recently, this past March, Silverman is coming off of a dominate performance in the Collegiate Ski and Snowboard Association (USCSA) National Championship at Whiteface Mountain in Lake Placid. He placed first in the alpine men’s snowboard disciplines of snowboard slalom (51.25 seconds) and in giant slalom (1:36:66) where he won by over five seconds.

Before you can even hear the sound of speed, the meeting of blade, ice, and snow, you are back at the top. It is in the staging area, after the tuning and waxing of boards and skies, that the mental games take over in the moments before take-off.

“That’s the hardest part, the mental side of the sport,” Silverman said. “On race day I get nervous but I try and have a routine, and stay focused and calm.” It is a routine that he has come to through experience.

The balance of school, where he plans on majoring in history, and media and society, with his athletic endeavors is made easier through his work ethic.

“While I’m at class every week, I’m also in the gym, focusing on my nutrition, and I really watch a lot of Lindsey Vonn and her training and competitions.”

Vonn, an Olympic gold medalist and an 82-time World Cup winner, along with another Olympian named Seth Wescott, have inspired Silverman. Wescott, a two-time gold medalist in snowboard cross is “someone I look up to,” added Silverman.

“Just breathing, watching skiers like Vonn and boarders like Wescott, and listening to the commentators helps put me in focus ... and some Alicia Keys always helps.”

As he reaches for a higher note, using an instrument that demands precision and persistence, Silverman will keep toiling his way up the mountain. Climbing to a summit knowing “it’s all about the journey. The support of people in my home town and especially my family and friends mean everything to me.”

For the next step, “I will be heading out to the Olympic training center in Colorado Springs, Colorado. I’m aiming for 2022.”

LEGAL NOTICE Notice of Formation of Heart of Gold Equines