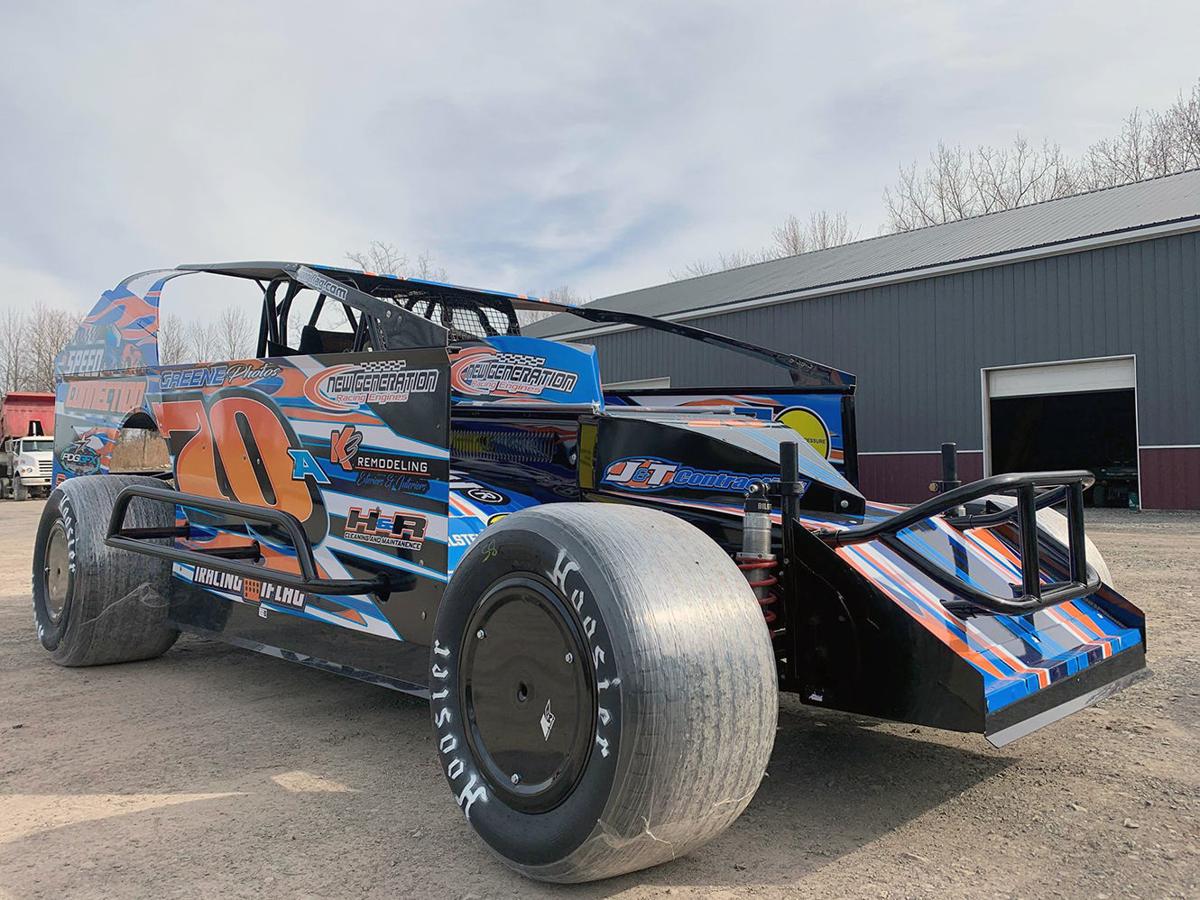 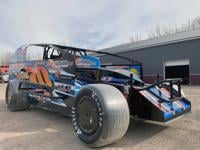 Alex Payne wheels the No. 70A sportsman car.

Eldon Payne Jr.’s fleet of DIRTcar modified cars. He has driven the No. 28 since he broke into racing; that was the age he started.

Eldon Payne Sr. drove the No. 70 during his brief dirt-racing career in the 1970s.

Alex Payne wheels the No. 70A sportsman car.

Eldon Payne Jr.’s fleet of DIRTcar modified cars. He has driven the No. 28 since he broke into racing; that was the age he started.

Eldon Payne Sr. drove the No. 70 during his brief dirt-racing career in the 1970s.

Eldon Payne Jr. stepped back and let the learning happen. His father, Eldon Sr., was guiding his grandson, Alex, through one of the many lessons one needs to learn to reassemble a race car.

“My father is 73, and we are all still wide-open every day,” Eldon Jr. explained. “He is into it more so with the grandson. I didn’t have that growing up. My dad’s father died young, and my mother’s father has had some struggles. … I didn’t know him.

“Alex having this part of his family so close to him makes a big difference.“

Alex Payne is a third-generation wheelman who will embark on a full-time sportsman schedule this year. He turns 15 in September. He will run side-by-side with his father, who plans on a full-time modified schedule.

“To keep carrying on what my grandfather and my dad have been doing for a long time is pretty cool,” said Alex, who drives No. 70a, a spin on his grandfather’s No. 70.

“I think he has more patience at 13 than his dad did at 19. He is a cool driver,” Grandpa Eldon added. “I’m there every Friday night and most every race Saturday unless my wife tells me I am going to be doing something else.”

Eldon Sr. raced street stocks, driving his No. 70, a 1967 Barracuda, after some buddies started their own racing program.

“I was always more of a drag racing fan, but they kept after me,” Eldon Sr. said. “After I raced dirt, I never went back to drag racing.”

Eldon Sr.’s career on dirt was short, lasting two seasons in the mid-1970s. Prior to his endeavors, he had a paternal uncle who raced at Woodhull, but never knew him.

“My father was a mechanic, and he worked on a guy’s race car a few weeks, but that was as far as that ever went,” Eldon Sr. said.

“I thought it was awesome,” Eldon Jr., 48, recalled about watching his dad from the stands. “Kids weren’t in the pits really at all. In his day, they had three divisions: rookie, novice and expert. He and a friend of his shared the car.”

Storied videographer and racing historian Bob Miller recently discovered a photograph of Tom Juhl following a win at Rolling Wheels in the mid-1970s. Eldon Sr. was the runner up.

While finishing high school, Eldon Sr. built a 1973 Road Runner-Satellite hybrid so that Eldon Jr. could launch his racing career.

“It kept him off the streets,” Eldon Sr. joked. “Once he graduated, I hoped that would be the end of it, but Darryl (Ruggles) let him take a lap around the track. He came back and said, ‘I really like this.’ Lots of dollars later … ”

That lap was in a sportsman car, sometime around 1999. In an eight-year span, Eldon Jr. wheeled his No. 28P — the number represented the age he began racing sportsman cars — to numerous wins and three track championships. Eldon Jr. won the Land of Legends sportsman championship in 2002, and took divisional crowns at Rolling Wheels and Weedsport in 2004. He also collected a regional DIRTcar Sportsman championship that season, making a total of 72 starts and averaging a finish of third. The 2004 docket included a win in the sportsman leg of the Outlaw 200 weekend, then called the Victoria 200. He left the division for big-blocks in 2005, the year crate engines were introduced.

In modifieds, Eldon Jr. has enjoyed some success while running varied schedules. Last year, he won twice at Outlaw Speedway. In his time behind the wheel, he has amassed more than 30 wins.

His regular stops in 2020 include Outlaw and Land of Legends, driving the Mike’s Hard Lemonade-Pizza Logs-Jeff Hand Engines-Performance Race Engines No. 28P Bicknell. There also is a Teo at the team’s disposal.

Alex will be in the Speed Connection-Bilstein Shocks-Ricks Wheels Powder Coat and Polish-H&R Cleaning No. 70A Bicknell. The car will feature a new power plant from New Generation Engines in the Wayne County town of Ontario, along with help from Redline Motorsports and the John Sperring family. There will be two cars at the ready for him — one is earmarked for weekly racing, while the other could end up in the DIRTcar Sportsman Series events, or just be a spare ride.

Eldon Jr. had a weekly car that ended up being the workhorse in his best seasons, and it is hard to get away from that, he noted.

“I haven’t had a full season since Alex started,” Eldon Jr. said. “The goal is for both of us to run full time at Outlaw and Land of Legends. We are going to attempt to focus more on his program and mine.”

Gone but not forgotten by ex-teammates, Jimmy Graham’s impact on Packers went beyond limited production

Dalton, Cowboys hope to turn corner ahead of Thanksgiving showdown

“It’s a lot of shop time,” Alex noted, “but I am trying to learn. I am getting into the tires and stuff, and doing the tires for both cars.”

Alex, who earned Rookie of the Year honors at Outlaw Speedway and Land of Legends Raceway in 2019, as well as in the overall DIRTcar Sportsman division. broke into racing in a rather unorthodox way. He started with a Tobias Slingshot, and raced to third his first time out in a single-barrel carburetor class. He then beat the adults in the next level up. After just a dozen starts, he drove the sportsman car for a lap at Paradise Speedway.

Eldon Jr. remembers being shocked at his control and smoothness.

He spent a half-season in the rookie sportsman division, winning four times in 2018. Last year, in addition to the rookie accolades, he took second at Ransomville’s King of the Hill event, and was top five in the season-long points battle at Outlaw Speedway.

Alex is still not old enough to hold a traditional learner’s permit, and his age has been a barrier to driving a sportsman car. Outlaw offers a youth four-cylinder division, but the plan was to be in an eight-cylinder, open-wheel machine. Tyler Siri gave Alex a break at Outlaw, and soon after, Bill Shea at Utica-Rome invited him to race in their 2018 rookie class.

Paul Cole was new to the promoter game at Land of Legends at the time, but eventually petitioned DIRTcar’s board to get the age threshold reduced so Alex could race there with a DIRTcar license in 2019.

In addition, Alex has honed his skills racing online — iRacing has become a hit during the COVID-19 pandemic. He explained setups, such as gearing, shocks and stagger, and slick surfaces in virtual competition that translate to the real world.

“And the eye-hand coordination, and your feet, it’s the same (for iRacing),” Eldon Jr. said. “It has to help.”

Grandpa finds Alex to be wise beyond his years.

“He was interviewed at Syracuse during the Expo in ’19,” Eldon Sr. said. “He said, ‘I would like to have a win, but If I can finish top five, I would be happy. There are a lot of guys I can learn a lot from.’ It made me proud.”

“My dad, Grandpa, they taught me everything,” Alex said. “I wouldn’t know anything if it wasn’t for them. The biggest thing? I think it’s you don’t give up. You keep going.”

Alex has come close to winning a feature, and did finish first in a B-main in last year’s season-opening event at Land of Legends. While his dad has developed a reputation as someone who likes to charge the corners — “Eldon (Jr.) wanted to win races on the first lap,” Eldon Sr. said — Alex is aggressive in a different way.

“Alex is aggressive in a calm manner,” Eldon Jr. elaborated. “He won’t stuff the nose under someone on a restart. If someone chops him off, he isn’t in there to bump them up. He is smooth, rolling the outside.

“He learned the track way faster than anyone would. It’s a rotation game, and he learned rotating the car on a race track is the fastest way around. I don’t know if you can teach that.”

Alex does well in school, but prefers to be in the shop. Solid marks in school equate to time in the race car; otherwise, the car stays parked, he said.

While Alex is focused on sportsman racing, Eldon Jr. sees a raw talent that might be able to climb the ladder one day. Already there have been discussions about sprint cars and late models.

“I think Alex could be a good asphalt driver,” Eldon Jr. said. “He would love to be a late model driver. That is his world — Tim McCreadie, highly successful in that ranking — but there isn’t a lot of that around here.”

Alex was more muted with his aspirations.

“I want to win some sportsman races, then get into a modified,” he said. “We’ll see where it goes.”

This is the first in a series that will focus on multi-generational racing families in the Finger Lakes region. Of course, when we get more concrete news about when the upstate racing season will get underway, we’ll pass that along too.

There are many families — locally, regionally and nationally — boasting at least three generations of racers. Here are some of those (if you know of more, and have the names, email them to Chris Marquart at smashedempirefilms@gmail.com):

Many thanks go to DIRTcar’s Dean Reynolds, historian Bob Miller, drag racing podcaster Jason Oldfield, and Rich Sharpsteen Jr. and Steven Ovens for their help in compiling this list.