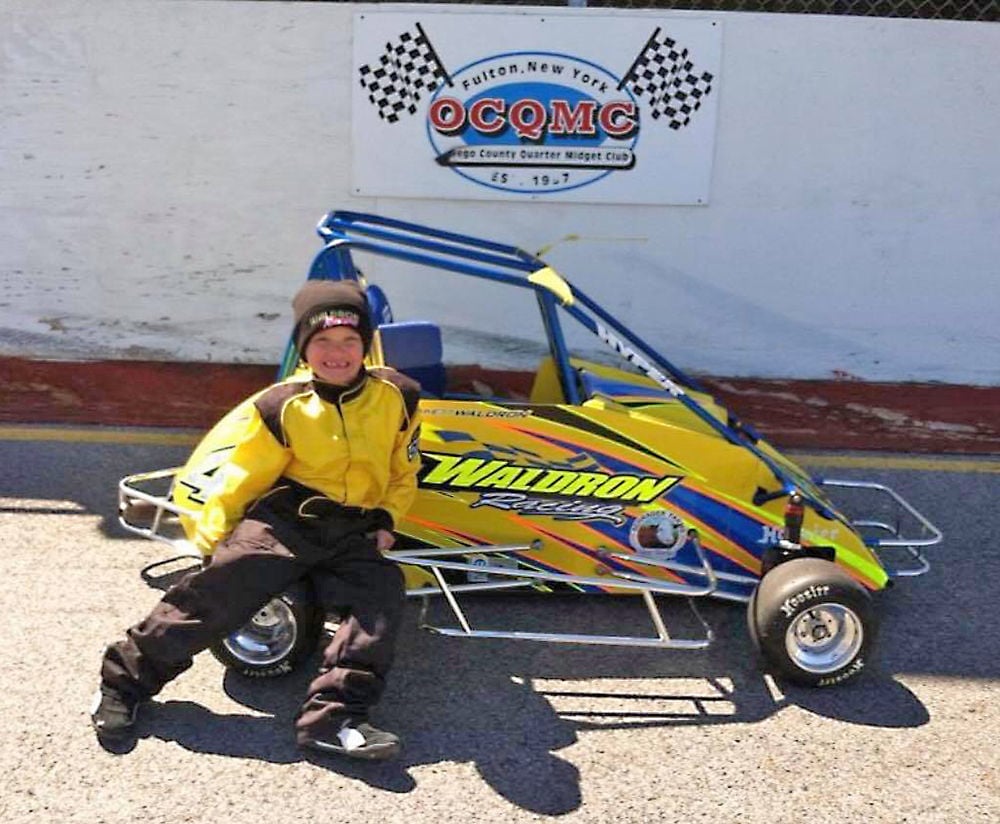 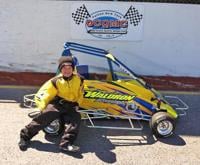 Emmett Waldron sits in front of the Quarter Midget he used to drive. 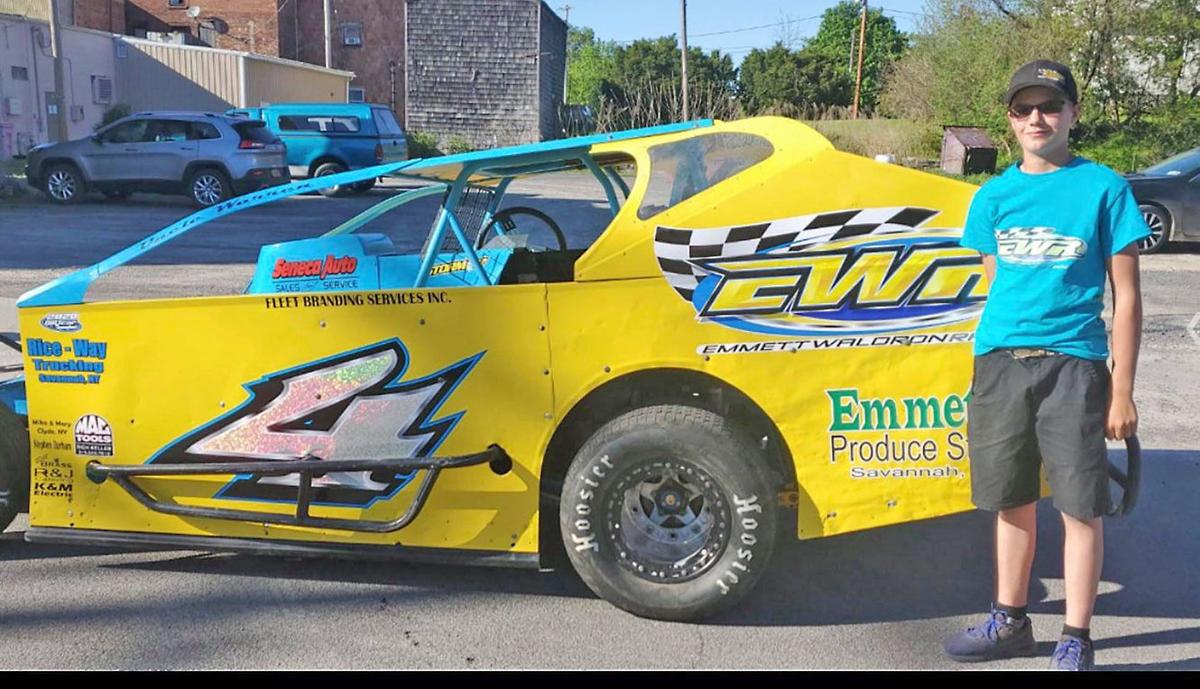 Emmett Waldron, 13, stands in front of the Troyer car he will drive in the Sportsman Modified division this season. 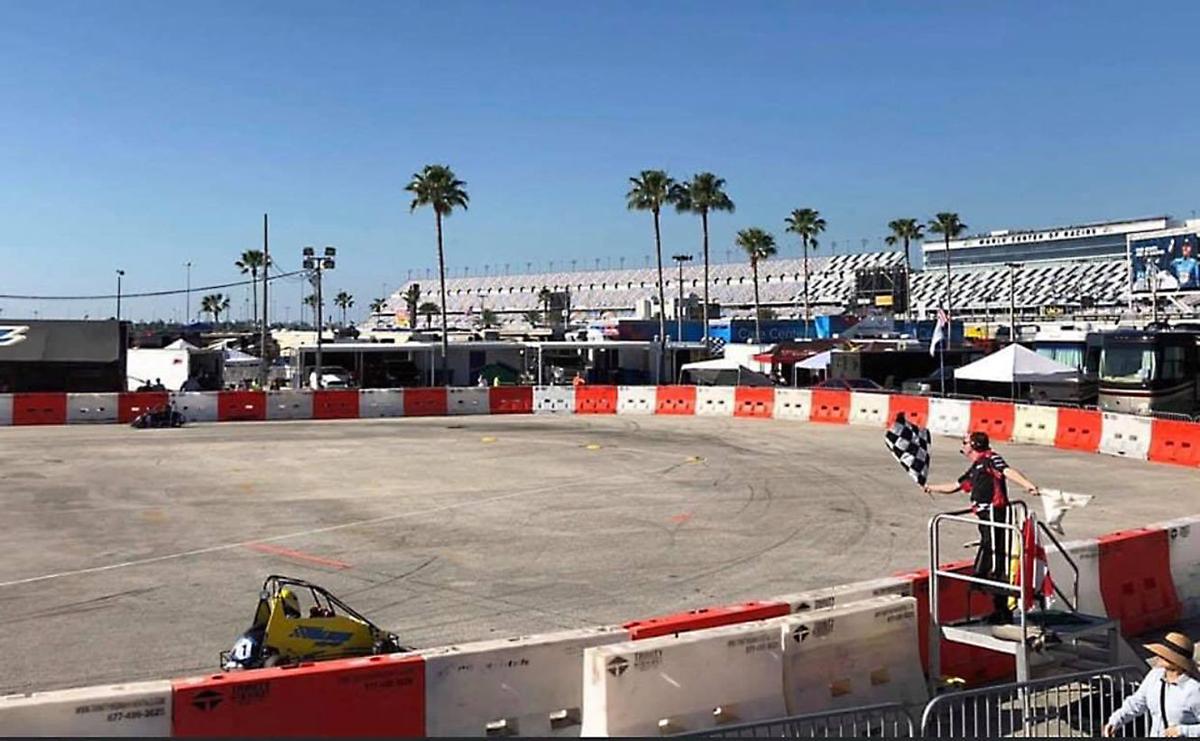 Emmett Waldron takes one of many checkered flags he earned in Quarter Midget racing. 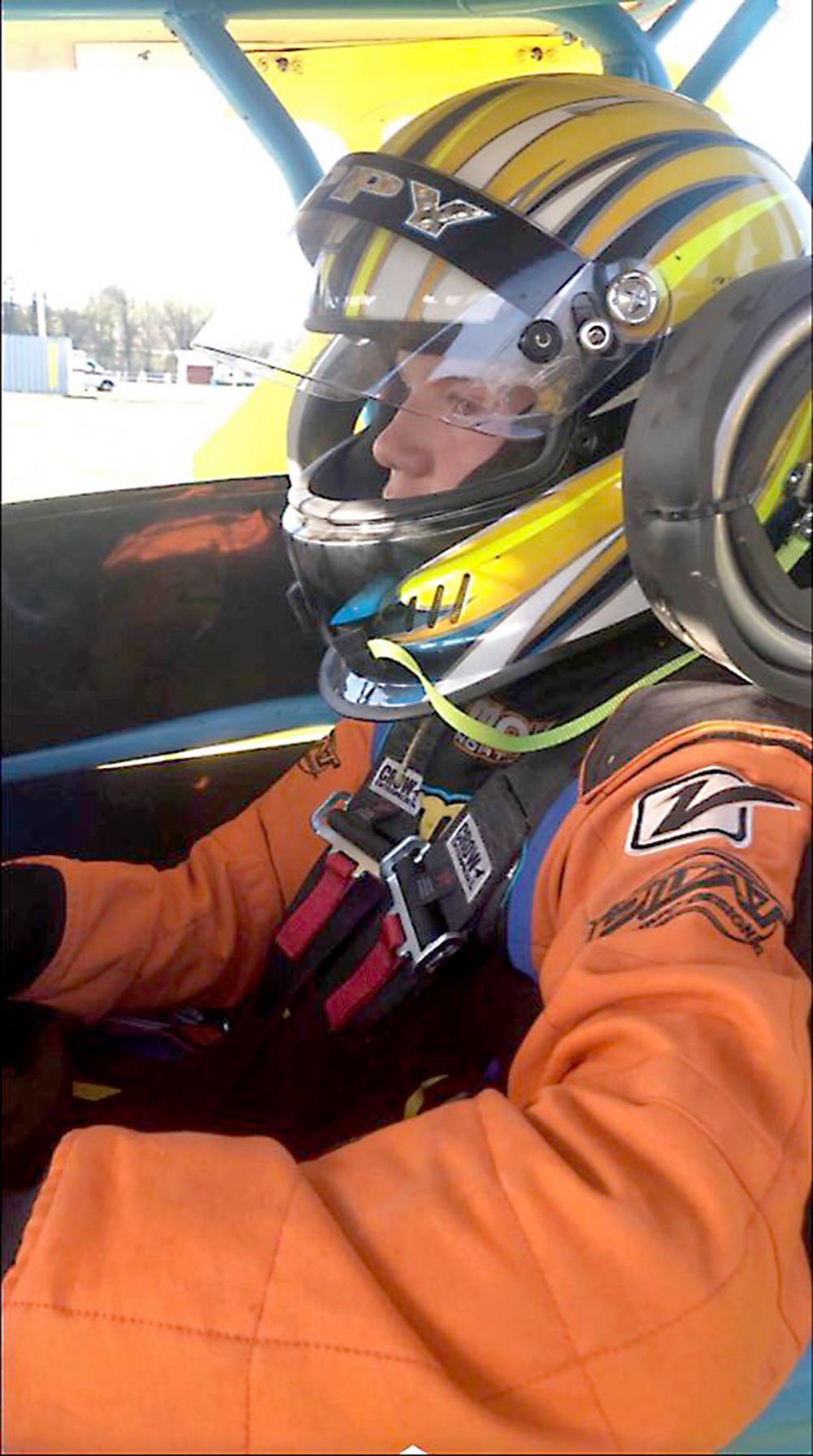 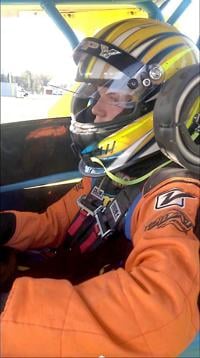 Emmett Waldron sits inside the Sportsman Modified car he will drive in 2020. 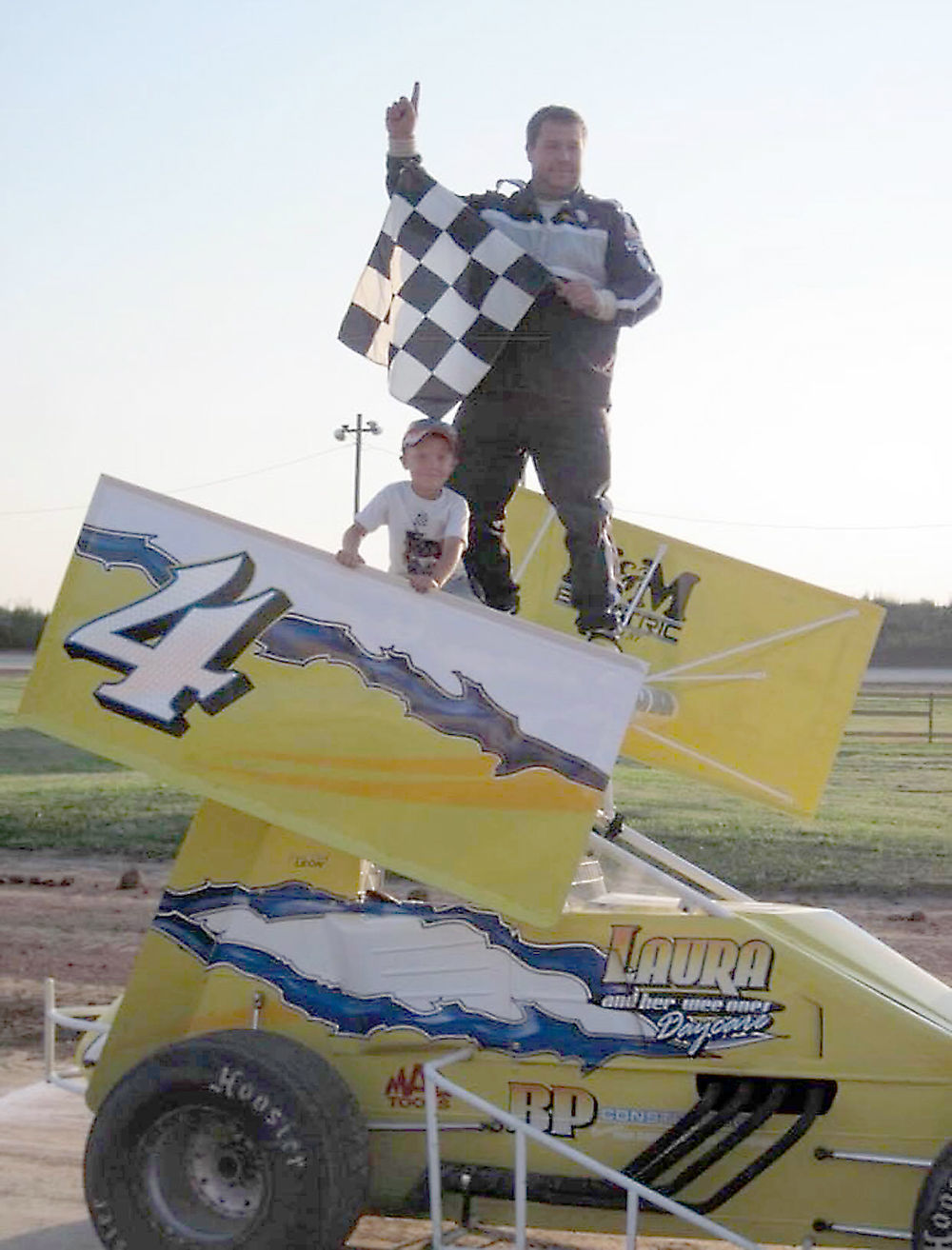 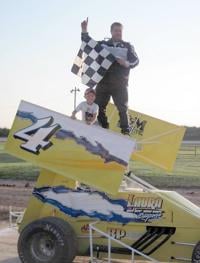 Emmett Waldron sits in front of the Quarter Midget he used to drive.

Emmett Waldron, 13, stands in front of the Troyer car he will drive in the Sportsman Modified division this season.

Emmett Waldron takes one of many checkered flags he earned in Quarter Midget racing.

Emmett Waldron sits inside the Sportsman Modified car he will drive in 2020.

Heath and Emmett Waldron are in the process of authoring what they hope to be a fruitful career in racing.

Emmett, 13, and his father, Heath, are embarking on their first season in a Sportsman Modified, graduating upward from a very successful campaign in the USAC Quarter Midget ranks.

“We did the USAC national tour, and midseason we realized how much money we spent on it,” Heath said. “We traveled all over the place and realized there was no sense in buying a new car when we could move into the Sportsman.”

Money aside, there was another factor. Emmett didn’t fit in the Quarter Midgets anymore.

“Last year, we went to Daytona and I was getting too tall for the car,” he said. “We raced twice, and decided to sell everything and buy a Modified. It would take us a year to get all the parts on it.”

“We sacrificed a year to have spares ready, so we weren’t piecing things together all year,” Heath added.

Emmett, whose family lives in Savannah, has been out with the Troyer car once, taking part in an exceptionally limited practice effort at Afton. Teams were allowed a driver and two crew members, and only two hours in the pits, with intervals allowed on the racing surface. Social distancing was enforced in the pits and when teams parked their rigs.

The car is a former Jimmy Phelps car, a piece that remains from when Matt Sheppard was part of the HBR team.

Settling in “took me about 10 laps,” Emmett said. “We came out for the second session, and I hit the gas and went. I just hoped I didn’t hit the wall. They watered the top, and it was a little slimy up there.”

Laura, Emmett’s mom, stayed home. She has shown some anxiety over the move to Sportsman cars, and has only seen Emmett race once.

“She’s only watched him one time, and he went through the wall in the Quarter Midget at Fulton and they had to cut him out of the wall,” explained Heath, adding that he understands his wife’s nerves.

“These cars are big. At first, it was scary,” Emmett said, referring to his opening laps in the Sportsman. “It slides a lot more than my Quarter Midget. My Quarter Midget was stuck to the track. The Modified slides and rolls.”

“He did really well,” Heath relayed. “He never got passed, and there were veterans out there.

“I think I was more nervous for practice than he was. I didn’t cry, but I had tears in my eyes, thinking of the long road to progress, all the money we have spent.”

Quarter Midget racing produced memories for a lifetime: more than 60 wins, tons of traveling, visiting multiple states, wins, success, accolades. And, while the path to being a career racer would likely be on asphalt, the opportunities in the Finger Lakes aren’t there. Plus, Emmett always wanted to drive a sprint car.

Heath drove a 4-Cylinder Modified for four seasons at Paradise Speedway, exiting the car willingly when Emmett was old enough to begin racing himself. Heath was a longtime fan, and as a 7-year-old recalled his father having a partnership in a 4-Cylinder Modified for a brief period. He also worked on the Breens’ sprint-car operation with Blake and Bobby; both are out of racing now.

Whereas families we have chronicled in the past month have generational reach in the sport, that longstanding legacy is more tied to racing fandom than anything. It doesn’t, however, mute the passion for the sport nor serve as a governor on the Waldron’s goals.

With restrictions on road trips, Packers look to beat hotel boredom — and it starts with … cornhole?

Bears vs. Falcons preview: 5 things to watch during the Week 3 matchup

“This year, our goal was to do Super DIRT Week. I don’t know if we will now because no racing is going on,” Emmett said. “We are trying to figure the car out. I haven’t been on dirt before. I want to be in a Modified in two years or so.

Where might the younger Waldron pick up on all these notes at a young age? Sheppard and Randy Kisacky.

Emmett has been shadowing “Super Matt” since August of last year, helping around the shop and traveling locally to learn the ropes of Modified racing.

“They treat Emmett like family,” Heath said. “He goes to dinners, bonfires, cookouts with them. They welcomed us into the circle of friendship, and it’s been amazing, to be honest.”

The experience with the Sportsman has been overwhelming as a whole, even with Hall of Fame-caliber mentoring experience. Sheppard helped quite a bit on the car leading up to the practice at Afton, and Kisacky’s fingerprints can be found on the shock package. The team considered traveling to Penn Can Speedway, where the track welcomed a packed grandstand and 170 cars for Memorial Day weekend. They didn’t since they didn’t have a set of American Racer tires.

“We probably wouldn’t be doing any of this if it wasn’t for Matt,” said Heath, noting that Emmett also had to acquire a special variance to compete, much like fellow Sportsman driver and youngster Alex Payne (Times, April 28).

Emmett is involved in the fundraising as well.

In the summer, he tends a garden and produce stand to generate income. He mows lawns in the summer and moves snow in the winter. The closing of school didn’t have much effect, as his parents pulled him out of the Clyde-Savannah school district when weekend racing began to overlap too frequently. He has been home-schooling since sixth grade, and continues to perform well at that level.

“School ended at 3 p.m., and we would leave to go racing at 2 p.m.,” Emmett explained. “I was getting out an hour early on Fridays, so in seventh grade we were going to do home-schooling if we were going to race every week.”

The team has purchased the car, a former Wade Christman engine, and a new, 33-foot gooseneck and countless spares over the last year in preparation for a serious campaign. Emmett has been iRacing, which has helped him get acclimated to the slide of a Dirt Modified. Emmett recently beat Kyle Larson with his modest computer and $70 steering-wheel setup.

The Sportsman division is another rung on the ladder; Heath and Emmett expect to be there a short time before switching to 358-Modifieds. Among the many reasons: economics.

While there continues to be some discussion about climbing into a sprint car, Emmett is looking to learn what he can right now, and is focused on Modified-style racing.

“This is all humbling, and it’s what he wants to do for a living,” Heath said. “When he was old enough, it was time for me to hang it up. He wants to drive for a living, and he wants to be driving for someone, someday. He needs seat time, but we will take him as far as we can take him.

“The support from local people stepping up to help us ... we never had that with the Quarter Midget. We used to travel all over the United States. I don’t know what the difference is. Maybe they see Emmett is trying to progress? It’s hard to describe, but we are grateful. People have given us the opportunity to go race.”

Chris Marquart’s “Motorsports” appears each Tuesday from April through October, and every other Tuesday from November through March. Contact Chris at (315) 729-3999 or smashedempirefilms@gmail.com.

Thirteen-year-old Emmett Waldron, who is featured in this week’s “Motorsports,” is focusing his attention on Land of Legends Raceway this year, his first driving a Sportsman Modified.

The track at the Ontario County Fairgrounds has shared promotional flyers hinting at June 6 as their season-opening date. In the meantime, Land of Legends has scheduled practices for June 2 and 4, from 6:30-8 p.m. each night. Gates open at 5 p.m. Pit-area social distancing will be in effect, and no spectators are allowed.

The 2020 season is set to commence with a June 6 twinbill featuring Street Stocks and Hobby Stocks at 2:30 p.m. and Modifieds, Sportsman Modified and Sprint Cars at 7 p.m.

Because no fans are allowed, all of the action will be livestreamed for free on Land of Legends TV.