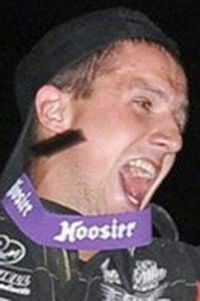 Mat Williamson defended an 18-point advantage in the final 40-lap feature of the year to collect his first career Super DIRTcar Series championship, the first time a Canadian driver has accomplished the feat.

On Saturday, in the final feature of 2019, Matt Sheppard started on the pole at the World Finals at The Dirt Track at Charlotte. Williamson flanked him on the outside of the front row.

Billy Decker stormed past both on his way to winning the finale. Williamson was runner-up, while Sheppard rallied to 10th place after some late-race issues.

Williamson’s season was anchored by a successful second half to 2019, highlighted by a triumph in the NAPA Super DIRT Week Billy Whittaker Cars 200 and a $100,000 payday in the Centennial event at Orange County Fair Speedway. The Super DIRT Week victory and Super DIRTcar Series championship are worth a total of $90,000.

The season turned around following a podium effort at Weedsport Speedway, where the Buzz Chew team has struggled.

“I had belief in these guys the whole time,” the St. Catharines, Ontario driver said in a DIRTcar Racing-issued release following the trackside coronations. “I just had to believe in myself and know that we could do it.

“The team is second to none. They deserve this and they’ve worked harder than anyone. We had our growing pains, but we worked harder and stuff got better.”

Williamson, who made a big dent in Sheppard’s series lead when the Waterloo driver ranked 31st in the Whittaker Cars 200, was still doing the mental math while circling the 0.4-mile oval in Charlotte while watching Sheppard battle Decker for the lead. Sheppard had lost a cylinder during pace laps, handcuffing his abilities in the final showdown.

“I just kept the foot to the floor trying to keep it going the best I could, but I don’t think it would have mattered,” Sheppard said. “If I would have won the race, Mat still came in third.”

No one knows what it takes to win Super DIRTcar Series championships like Sheppard. He gave full credit to Williamson and his team.

“They deserve it,” Sheppard said. “They had the most consistent year, and that’s what this championship is about. This isn’t NASCAR with playoffs. We won the most races and had really good finishes, but in the end we had more bad nights than they did.

“Hats off to them, the driver, the crew and the team. Everyone there did a great job. They did what they needed to do, and that’s why they’re the champions.”

Williamson trailed Decker at the finish line Saturday. Mike Maresca faded to third ahead of Sheppard and Max McLaughlin.

In Friday’s 40-lap main, Sheppard stormed through the top 10 as Williamson struggled in the middle of the pack. Sheppard nearly wrecked, but was nudged along by Max McLaughlin, righting the No. 9s. Sheppard then had trouble with brakes, and hit Larry Wight and cut a tire. He rebounded to finish 10th.

Phelps found success following a chassis change, and after multiple top-10 runs in 2019, parked his ride in victory lane. Erick Rudolph was second ahead of Wight, Ward and Williamson. Justin Haers was 13th, and named the events “hard charger” after moving past 22 cars.

In qualifying Thursday, Williamson scored a Billy Whittaker Cars Fast Time Award and won a heat for the Friday feature race to forge a tie atop the point standings. Sheppard took second behind Decker.

Rains forced the qualifying heats for Saturday’s feature to be contested Friday instead of Thursday night. The weather challenges forced officials to scrap last-chance showdowns and start all entries in both features.

In other World Finals action:

• Brad Sweet ran the race of his life in the World of Outlaws Sprint Car Series finale. He started second, but served up an epic slide job to halt Donny Schatz’s advances in the 30-lapper, preserving a 2-point edge over Schatz for his first career World of Outlaws championship.

Sweet was working in second on lap 5, while the hard-charging Schatz was racing up from eighth before being blocked by Sweet’s No. 49. Schatz cleared him on the next circuit, but slipped in the fourth turn, allowing Sweet to return the favor with a turn 1 slide job that had no margin for error.

Schatz needed to win or finish two spots ahead of Sweet to collect his 11th career title, but came up short, thus ending his five-year run as champion.

With 10 laps to go, Danny Dietrich spun in front of Sweet, but Sweet swerved out of the way in time.

David Gravel won his second feature in as many nights to complete a sweep of the World Finals, giving him 12 victories for 2019, second behind Sweet’s 16 checkered flags. Schatz had finished second in Friday’s main event to climb closer to Sweet.

• Brandon Sheppard essentially had sewn up the World of Outlaws Late Model Series title before the World Finals, allowing him to focus on the circuit’s single-season win record. He fell short in the finale, ranking 11th and one win shy of the 19-win standard.

Jimmy Owens won his seventh career World of Outlaws event at The Dirt Track at Charlotte, a record among all drivers and divisions. Ricky Weiss was second ahead of Dale McDowell. Tim McCreadie ranked 26th.

Chris Marquart’s “Motorsports” appears each Tuesday from April through October, and every other Tuesday from November through March. Contact Chris at (315) 729-3999 or smashedempirefilms@gmail.com.