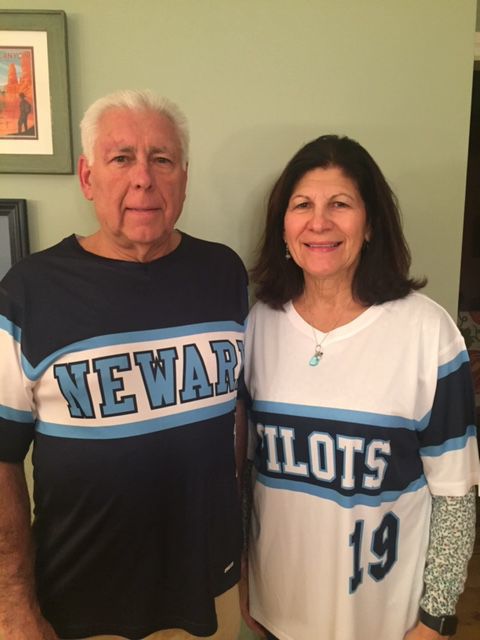 Steve and Carol are hoping to get local families to host players for the summer. If you are interested, contact Carol Szatko at (315) 527-4808.

NEWARK — Despite being in its winter hibernation, baseball still finds a way to remain relevant throughout the cold months.

The Newark Pilots won’t be back in action until late spring, but when they do, they’ll have new owners.

Steve and Carol Szatko recently purchased the team, which plays in the Perfect Game Collegiate Baseball League, from Lyons’ Bob and Leslie Ohmann. While they will certainly strive to steer the franchise back into the postseason, giving back to the community seems to be paramount to the couple.

The Szatkos paid $40,000 for the team with several more thousands in additional equipment and upgrades added in, including an updated entrance, scoreboard and locker rooms to name a few.

Their journey to ownership began in 2018 in Utica where Steve played semi-professional baseball in the now-defunct MUNY League (Municipal League). They were at a Utica Blue Sox game when Steve reportedly said, out of the blue, “I want to buy a baseball team.” His family laughed it off and proceeded to tell him to “be quiet and watch the game.”

Some months later, the Szatkos purchased the team from the Ohmanns. Leslie has gone back to work full-time, and with Bob’s other commitments, owning and operating both the Geneva Red Wings and Newark Pilots seemed too taxing.

“We sat down and we started to talk,” Bob Ohmann said. “One of the most important things for us was to find the right people for Newark. I wanted the program to continue. When I met Steve and Carol, it kind of clicked. They are all about the community and giving back, and that was so important.”

“We went down to Geneva and Newark,” Steve said in a phone call. “There was something special and inspirational about Newark.”

The deciding factor seemed to be that Steve and Carol fell in love with the Newark Pilots much like Bob and Leslie had, and that struck a cord with the Ohmanns.

“I wanted to make sure the Pilots stay in Newark,” Ohmann said. “When I talked to Steve and Carol, they were committed to the town. The second hurdle was I didn’t want it turned into a corporate type of team that would just look to make money.”

After the purchase went through, Steve recalled the first thing he and Carol did was look at each other and say with a laugh, “What the hell did we just do?”

After uneventful free-agent period, Packers turn to draft — with hope for more roster help later on

NFL draft will be in ‘fully virtual format,’ leaving Packers GM Brian Gutekunst and staff to work from home

The second thing they did was reach out to their players to introduce themselves and establish the Szatko-style culture. That culture involves focusing on the development of each and every recruit as a player and person.

“I have been calling every one of my recruits,” Steve said. “We have been discussing our philosophies and giving them our background, telling their parents to call us; all the kinds of things that I do when I am a superintendent.”

For Carol, owning the team gives her a chance to continue the family’s love of sports.

“Whether it was baseball, hockey, football, those were the sports we followed with our son and our grandson as well as our daughter who played club lacrosse at LeMoyne,” Carol said. “Sports has been a big part of our family, so baseball is something we are very interested in.”

Steve currently works full-time at Cazenovia College as a professor of education, part-time for SUNY Cortland as a supervisor for teachers who want to be administrators and is coming to the end of his tenure as interim superintendent for the Madison Central School District. Carol worked in the Mohawk Valley Psychiatric center until retiring six years ago.

As for on-field matters, the Pilots will be run by Steve and Carol’s son, Eric. It will be his first time managing a team, but given his experience playing and coaching sports the majority of his life, it won’t be much of a leap. Eric grew up playing baseball and participated in travel and high school teams.

For Steve, owning the Pilots gives him a chance to do what he loves most: Work with young people.

“It’s a love and passion for the sport that combines my interest of working with young people,” he said. “I have been in education for 50 years, and this allows me to interact with young people in a different venue, as opposed to the public school system. Now I am working with them in the arena of collegiate baseball, which I find very interesting.”

Owning a team fulfills a childhood dream for many baseball players, but for Steve, it is more than just sitting back and hoping for championships. Owning the Pilots gives him the chance to bridge the gap between his love for the sport and his passion for youth development.

The transaction also seems to have created a special friendship between the Szatkos and the Ohmanns, who now talk everyday.

“I think these guys will be great for Newark,” Bob said. “I’ll miss it, but I’ll be around. Newark’s only five miles from Lyons.”