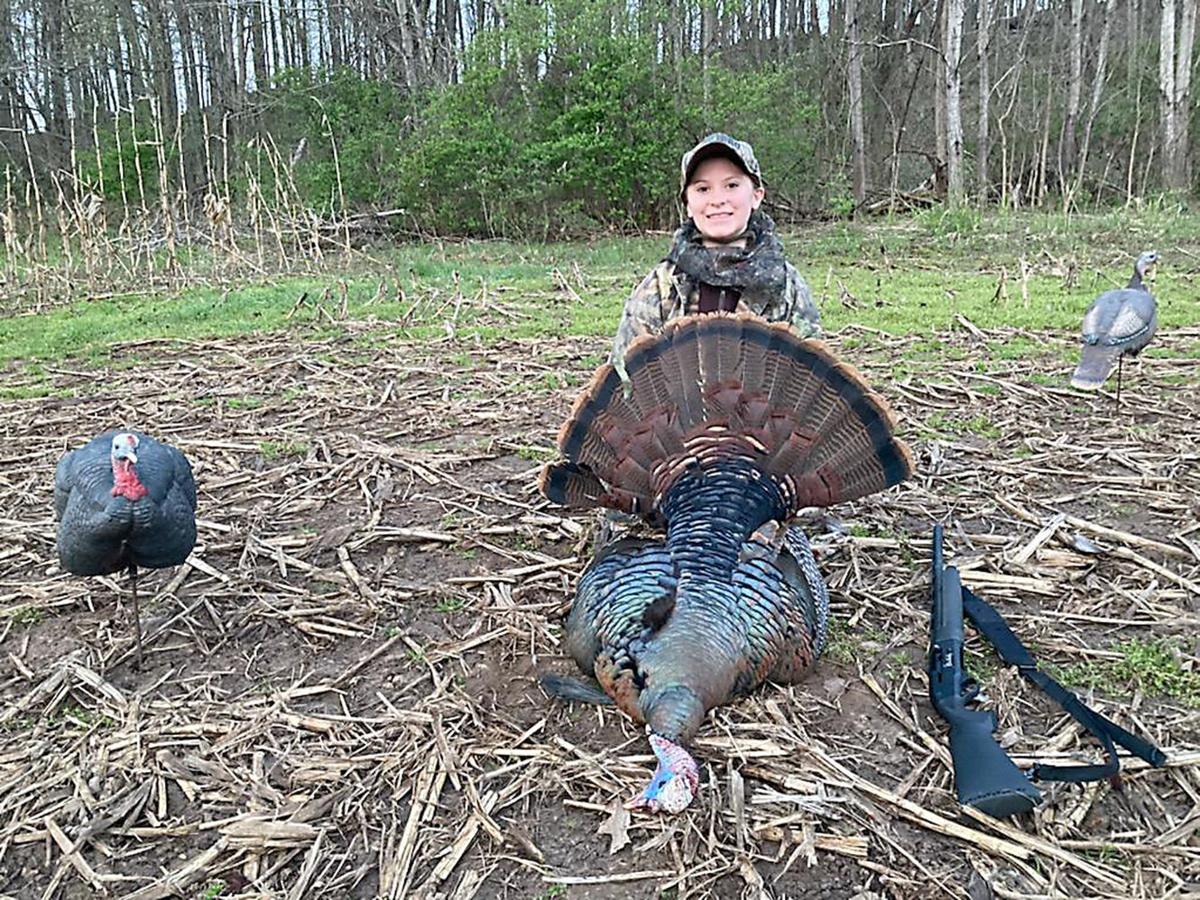 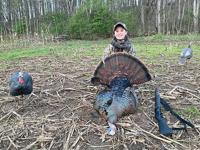 Kamryn Lainhart harvested this 21-pound turkey with a 9-inch beard and 1-inch spurs. The 14-year-old Clyde-Savannah student was hunting with her grandfather, Bucky Lainhart. 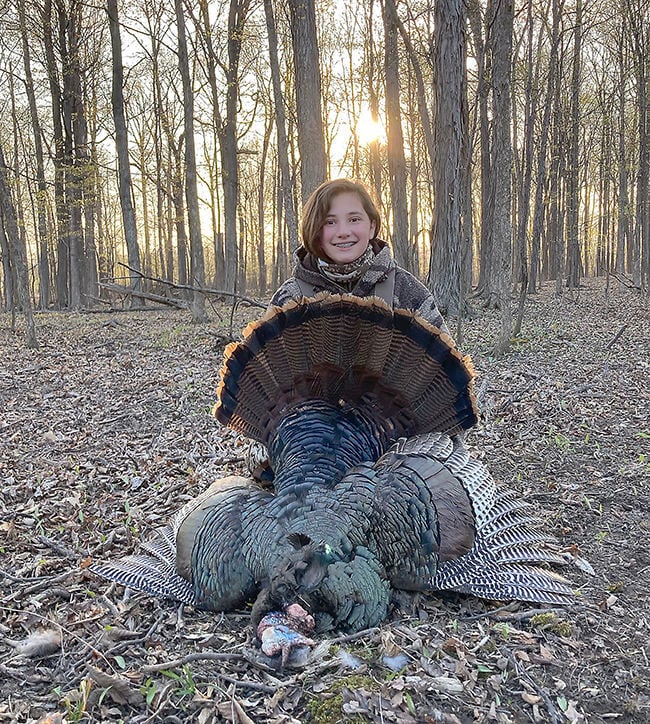 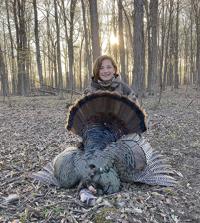 Olivia Drahms harvested the largest turkey by a female in the 2021 Yates County Youth Turkey Hunt, winning her a sponsor ticket package to the Tobehanna Creek Chapter of Whitetails Unlimited Banquet June 5 at Seneca Lake Duck Hunters Club. The 13-year-old Clyde-Savannah student was hunting with her father, Peter, and was being mentored by her uncle, New York State Department of Environmental Conservation Officer Tony Drahms.

Kamryn Lainhart harvested this 21-pound turkey with a 9-inch beard and 1-inch spurs. The 14-year-old Clyde-Savannah student was hunting with her grandfather, Bucky Lainhart.

Olivia Drahms harvested the largest turkey by a female in the 2021 Yates County Youth Turkey Hunt, winning her a sponsor ticket package to the Tobehanna Creek Chapter of Whitetails Unlimited Banquet June 5 at Seneca Lake Duck Hunters Club. The 13-year-old Clyde-Savannah student was hunting with her father, Peter, and was being mentored by her uncle, New York State Department of Environmental Conservation Officer Tony Drahms.

The Yates County Youth Turkey Hunt began in 2010 as a collaborative effort by Lt. Matt Lochner, Dale Lane and a dedicated group of volunteer callers and sponsors. Their idea was simple: increase and promote youth hunting opportunities in and around the Finger Lakes region.

Over the past several years, this event has provided a positive experience to roughly 300 first-time turkey hunters from across New York state and beyond.

This year’s youth hunt began with a dinner presentation at the Seneca Lake Duck Hunters Club on the west side of Seneca Lake. Environmental Conservation Officer Kevin Thomas and Lt. Lochner discussed hunting ethics and reviewed the four primary rules of firearm safety.

Champion turkey caller Jason Pollack conducted a seminar to teach the kids how to use mouth calls he custom made and box calls The Grind Outdoors donated for each young hunter.

Thanks to the time and effort put in by the volunteer callers, the youngsters harvested 13 turkeys during the two-day hunt. After the Saturday morning hunt, everyone met up for pictures and a picnic lunch provided by the Seneca Lake Duck Hunters Club. All the kids received prizes ranging from hunting gear to blinds and decoys — even a lifetime sportsman license was given away, donated by the Penn Yan Moose Lodge. The biggest bird award went to Andrew Gregory who harvested a 23-pound tom with a 9 1/4-inch beard, and 1-inch spurs. His impressive trophy will be mounted as a full body turkey mount donated by Ryan Dailey of Dailey Plumbing and Heating and Jesse Lapp of Deer Run Outfitters.

For more information about the event, check out the Yates County Youth Turkey Hunt Facebook page at https://www.facebook.com/yatescountyyouthturkeyhunt/.

It’s just five days until the unofficial kickoff of the Lake Ontario season with the Spring LOC Derby. It begins Friday and continues through May 16.

Get in on the action and your share of $44,350 in guaranteed cash with $15,000 going to the lucky angler who enters the largest salmon.

There are four divisions with 20 cash prizes in each. Salmon, lake trout, brown trout and walleye are eligible. In addition, there is $1,100 in daily prizes, $500 for salmon, and $200 for trout and walleye.

For a complete list of registration outlets, weigh-in stations and prize breakdowns, or to register online, go to www.loc.org.

For Aaron Rodgers, a sarcastic ‘quiet offseason’ continues as Packers’ OTAs wrap up

The New York State Outdoor Writers Association continues to expand its Bob McNitt Memorial Scholarship Program. Most recently, the organization announced it is honoring longtime member and former president Melody Tennity of Honeoye by naming the Becoming an Outdoors Woman annual sponsorship after her.

Tennity is the only woman who has served as NYSOWA president, presiding over the organization’s affairs from 2004-06. She and her husband Frank, who run Tennity’s Guide Service, have been dedicated members of NYSOWA since joining in 1997.

Not only is Melody Tennity an experienced outdoor writer, photographer and lecturer, she is a licensed Coast Guard captain and state-licensed hunting and fishing guide.

“Due to Melody Tennity’s many contributions and commitments to the great outdoors, the NYSOWA board felt that it only be right that our newest scholarship be named The Melody Tennity Scholarship to support Becoming an Outdoors Woman,” NYSOWA President Chris Paparo said.

“Melody Tennity was not only willing to do more than her share to benefit NYSOWA, but was also always helping other sportsmen,” said NYSOWA treasurer and past president, Leo Maloney. “She was always willing to offer encouragement and take both men and women out fishing to improve or teach them new techniques. Melody was a pioneer in women becoming involved as guides or tournament bass fishermen and getting others involved.”

The ability to sponsor those attending the state Department of Environmental Conservation’s annual Becoming an Outdoorswoman workshop is the newest component of NYSOWA’s scholarship program. Beginning this year, the organization will send one NYSOWA member, spouse or child of a member to the BOW workshop annually. And, they will make an annual donation to support the non-profit Becoming an Outdoors Woman organization to help attendees in financial need.

Deborah Brosen, of Columbia County, will be NYSOWA’s first member to attend the BOW workshop. Brosen also is joining NYSOWA members Ed Noonan and Dan Ladd as co-chairs of the scholarship committee. The Bob McNitt Memorial Scholarship Program annually offers two $1,000 college scholarships to students in good academic standing, and who are pursuing a course of study directly related to environmental conservation.

NYSOWA also offers two annual scholarships to DEC Summer Camps (they are postponed in 2021 due to COVID) and also supports youth and adult outdoor programs.

Funding for the Bob McNitt Memorial Scholarship Program comes primarily from monetary donations and funds raised at NYSOWA’s annual fall conference with the support of the group’s active and supporting members as well as members of the outdoor industry.

To learn more about the program, or to donate to the scholarship program, visit nysowa.org.