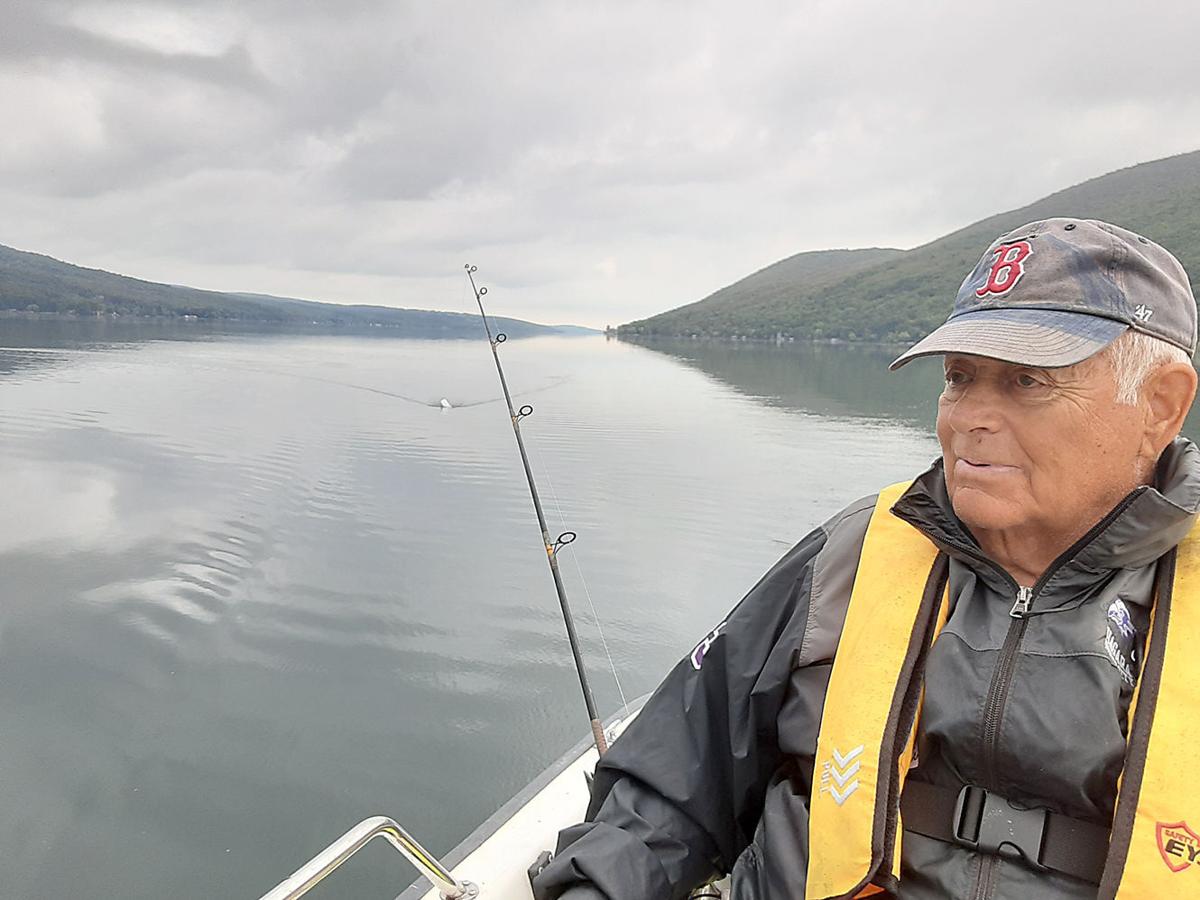 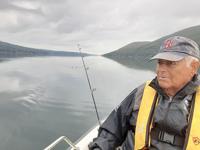 “Bick” Bicknell was at the helm July 2 when his good friend and fishing buddy, Dr. John Marino, reeled in a 16.3-pound brown trout from Canandaigua Lake. 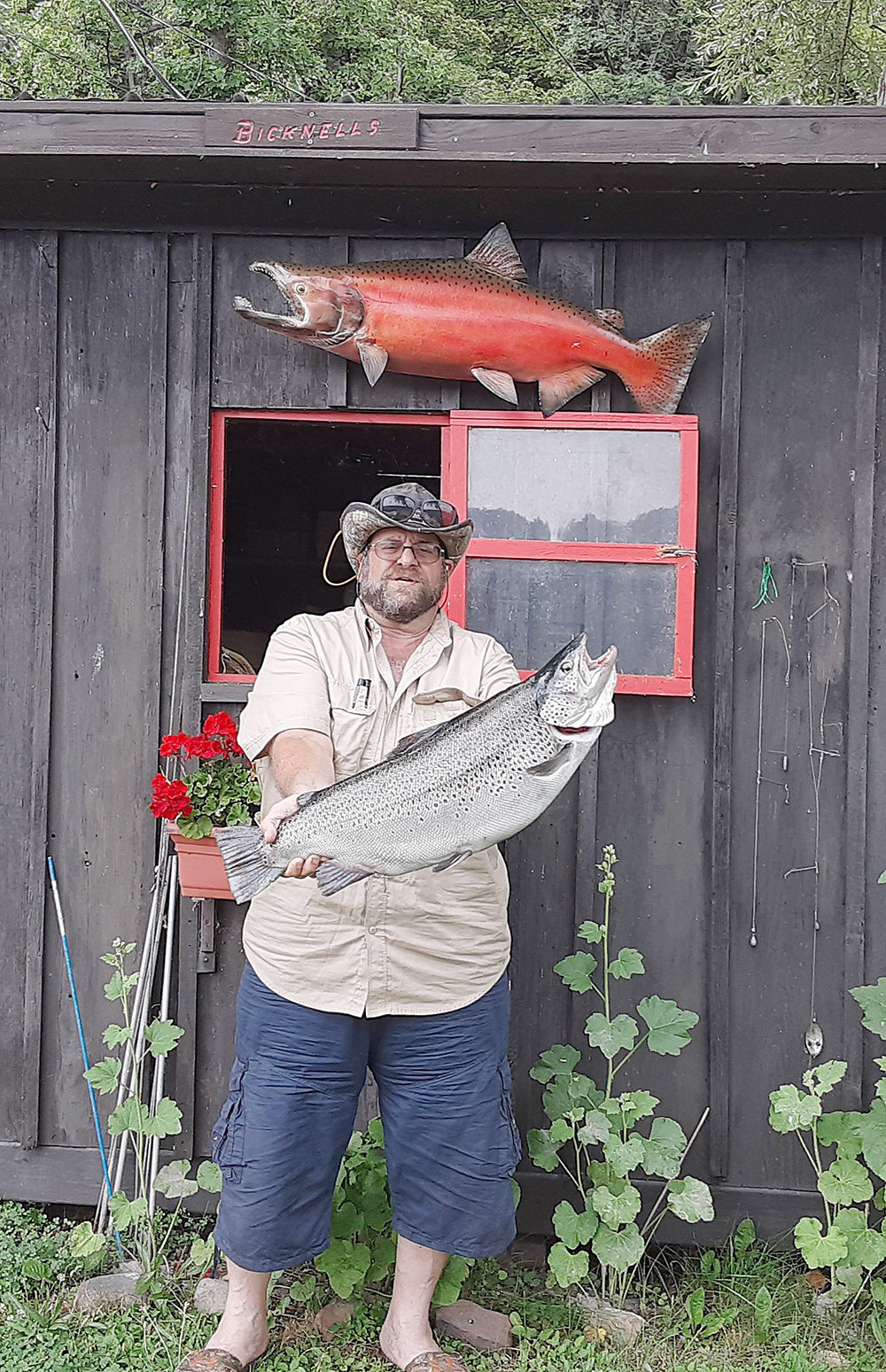 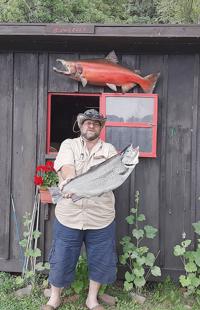 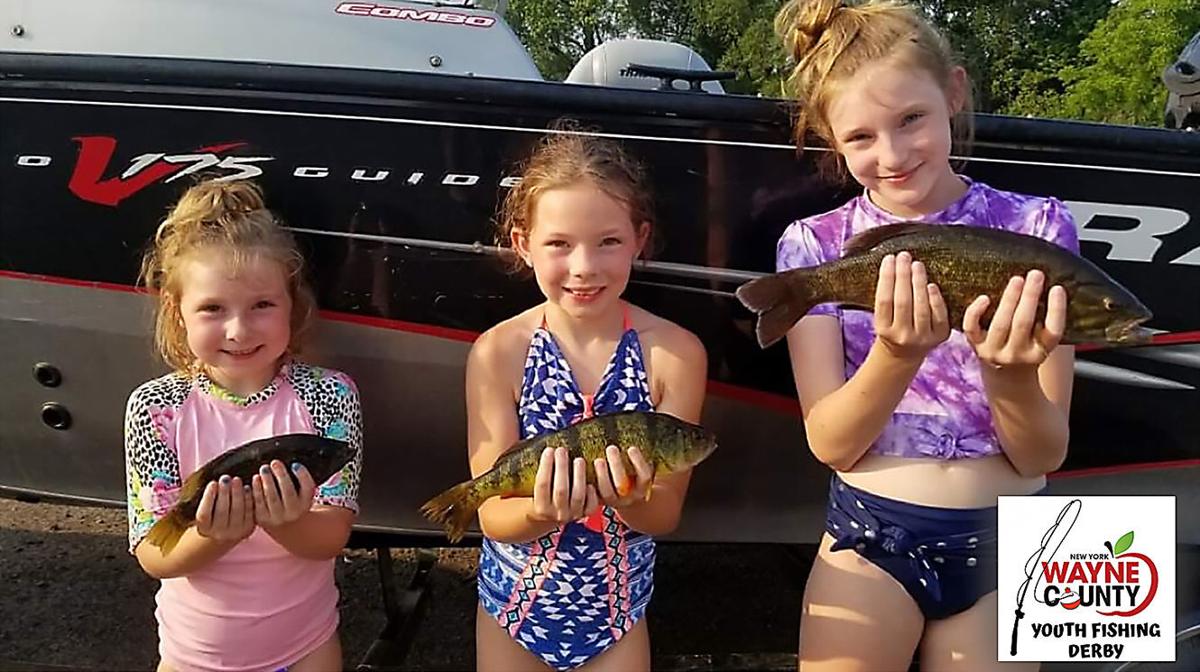 Cassie Thomas (middle) owns the lead in the Wayne County Youth Derby Species Challenge for perch with her giant 1-pound, 2-ounce catch. Her sisters, Natalie (left) and Jillian, also have fish on the leaderboard.

“Bick” Bicknell was at the helm July 2 when his good friend and fishing buddy, Dr. John Marino, reeled in a 16.3-pound brown trout from Canandaigua Lake.

Cassie Thomas (middle) owns the lead in the Wayne County Youth Derby Species Challenge for perch with her giant 1-pound, 2-ounce catch. Her sisters, Natalie (left) and Jillian, also have fish on the leaderboard.

The fishing partners had the Seth Green rig presentation working Canandaigua Lake on July 2, the beginning of the holiday weekend. It was an early start for Dr. John Marino and “Bick” Bicknell. They were on the water at 6:30 a.m.; by 7, they had caught a brown trout that may well have been the largest of its kind taken from Canandaigua Lake.

“We were fishing 60 feet down over 120 feet of water,” Marino said during a recent phone conversation. “The brown trout came from the thermocline.”

Bicknell managed the 12-foot Boston Whaler powered by a 30hp Mercury while Marino fought the fish.

“It took me 25 minutes to land the brown,” Marino reported.

The “football-sized” brown hit the scales at 16.3 pounds with a 28-inch length.

“We were running Sutton Spoons and the fish hit a No. 88 spoon,” Marino said.

The fishing buddies have spent countless hours angling Canandaigua and the other Finger Lakes. Marino, 62, lives in Gorham with his wife and daughter. He is a psychiatrist who has a private practice, Metamorphosis, in Canandaigua.

Bicknell, 83, is a retired Army major, a decorated Vietnam veteran, a retired charter captain, an engineer, and a naturalist.

Between them, the fishing partners have kept state Department of Environmental Conservation fishing logs for 35 years, knowing the data from their logs plays a vital part of managing a fishery.

Marino also is working on obtaining a six-pack charter license, enabling him to take six customers at a time fishing on the Finger Lakes. A Lake Ontario charter license has different requirements.

“Bick and I were out today and saw two mature bald eagles flying around while we were targeting lake trout,” Marino said. “We love to be on the water, and we are catch-and-release anglers, probably putting back over 90% of our catches.”

However, this massive “native granddaddy” of brown trouts was not returned to the water.

The Wayne County Youth Derby continues through the end of the month, so there is plenty of time to take your youngster fishing. All fish must be caught in Wayne County waters.

Cassie Thomas owns the lead in the Species Challenge for perch with her giant 1-pound, 2-ounce catch. All three Thomas siblings — Natalie, Cassie and Jillian — have fish on the leaderboard.

Other leaders: Cameron Humbert with a 4-pound, 3-ounce smallmouth bass; Parker Williamson with a 2-pound, 3-ounce walleye; and Noah Wazinski with a 3-pound, 12-ounce northern pike. Williamson and Wazinski have registered all fish for the Merchants Challenge.

Anglers can register for the youth derby at https://waynecountynysoilandwater.org/youth-derby/.

The state Department of Health has issued new advice about eating sportfish because some fish contain chemicals such as mercury and PCBs at levels that could affect health adversely.

This new advice highlights the success of banning the use of certain industrial chemicals combined with several decades of diligent efforts by state, provincial, tribal, and federal partners to monitor, assess, and clean up industrial contamination in the Great Lakes basin.

“It is very exciting when we see a decline in chemicals in fish that allows whole families to enjoy fresh caught fish meals from some of the largest fisheries in New York state,” state Health Commissioner Dr. Howard Zucker said. “Lake Ontario, and the Niagara and St. Lawrence rivers, offer incredible fishing opportunities. By following our advice anglers can make healthier choices about eating and sharing the fish they catch with families and friends, while reducing the potential for exposures.”

“New York State is making significant investments and undertaking critical actions to protect our waters from contamination,” added DEC Commissioner Basil Seggos. “Holding polluters accountable ensures anglers, both expert and novice, can enjoy fishing state waters with the information they need to determine when and where they can safely eat their catch.”

Women in their childbearing years who eat highly contaminated fish and become pregnant may be at an increased risk of having children who are slower to develop and learn. Some chemicals may be passed on in mother’s milk. Chemicals may also have a negative effect on the development of young children.

Women beyond their childbearing years, and men, may face fewer health risks from some chemicals. For that reason, women 50 or older and men 15 or older are given more leeway to eat more kinds of sportfish more often.

“This can now be a marketing tool to expand those promotion efforts with tourism and groups like the Lake Ontario Sportfishing Promotion Council,” recently retired Niagara County Promotion Director Bill Hilts Jr. said; he attended decades of sport trade shows during his 35-year stint. “During these events, the common question received was about whether the fish were safe to eat. Many potential anglers changed their plans upon learning about the prior consumption advisory. That is all in the past. You can now catch trophy fish and eat them without any health worries.”