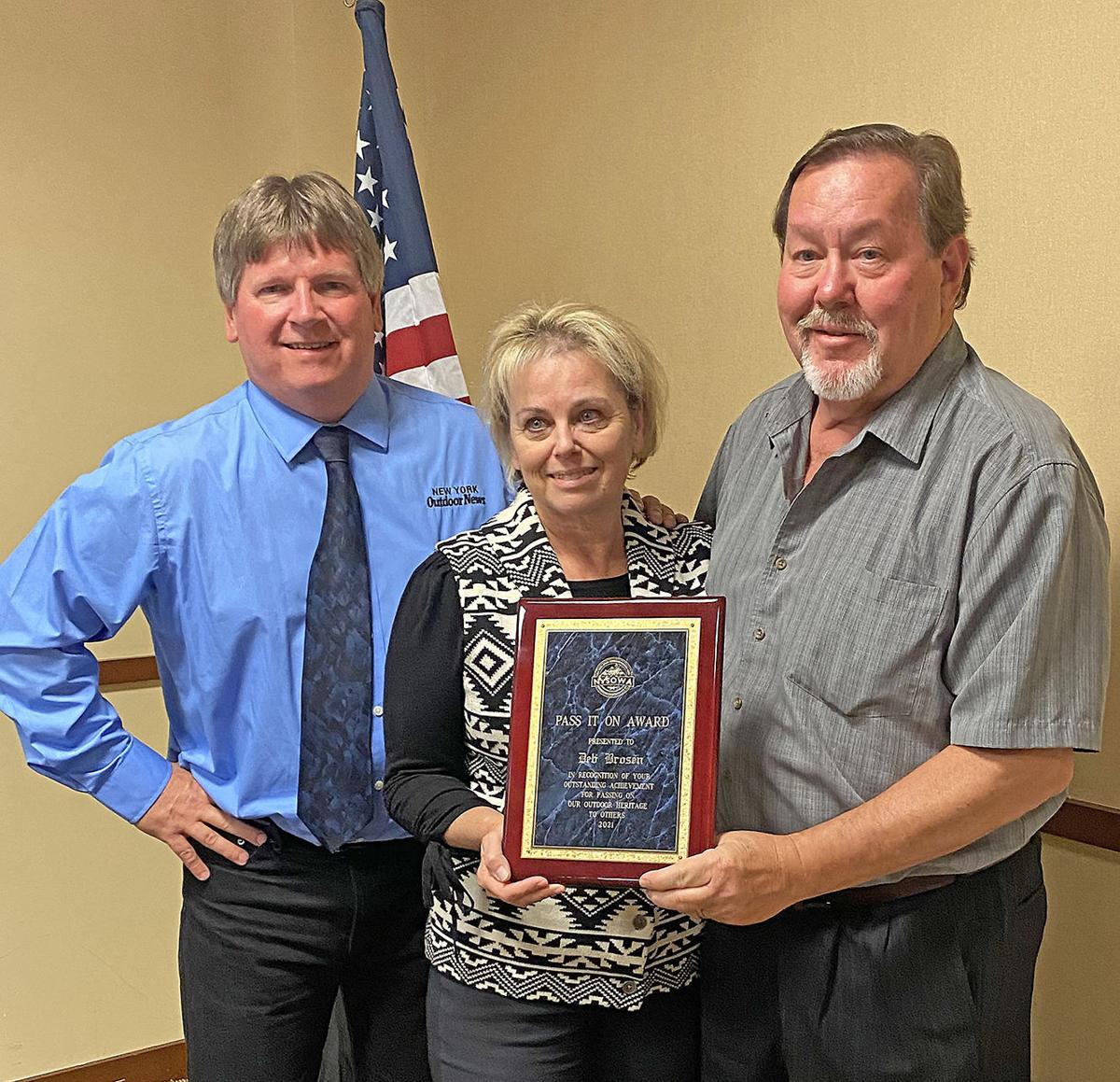 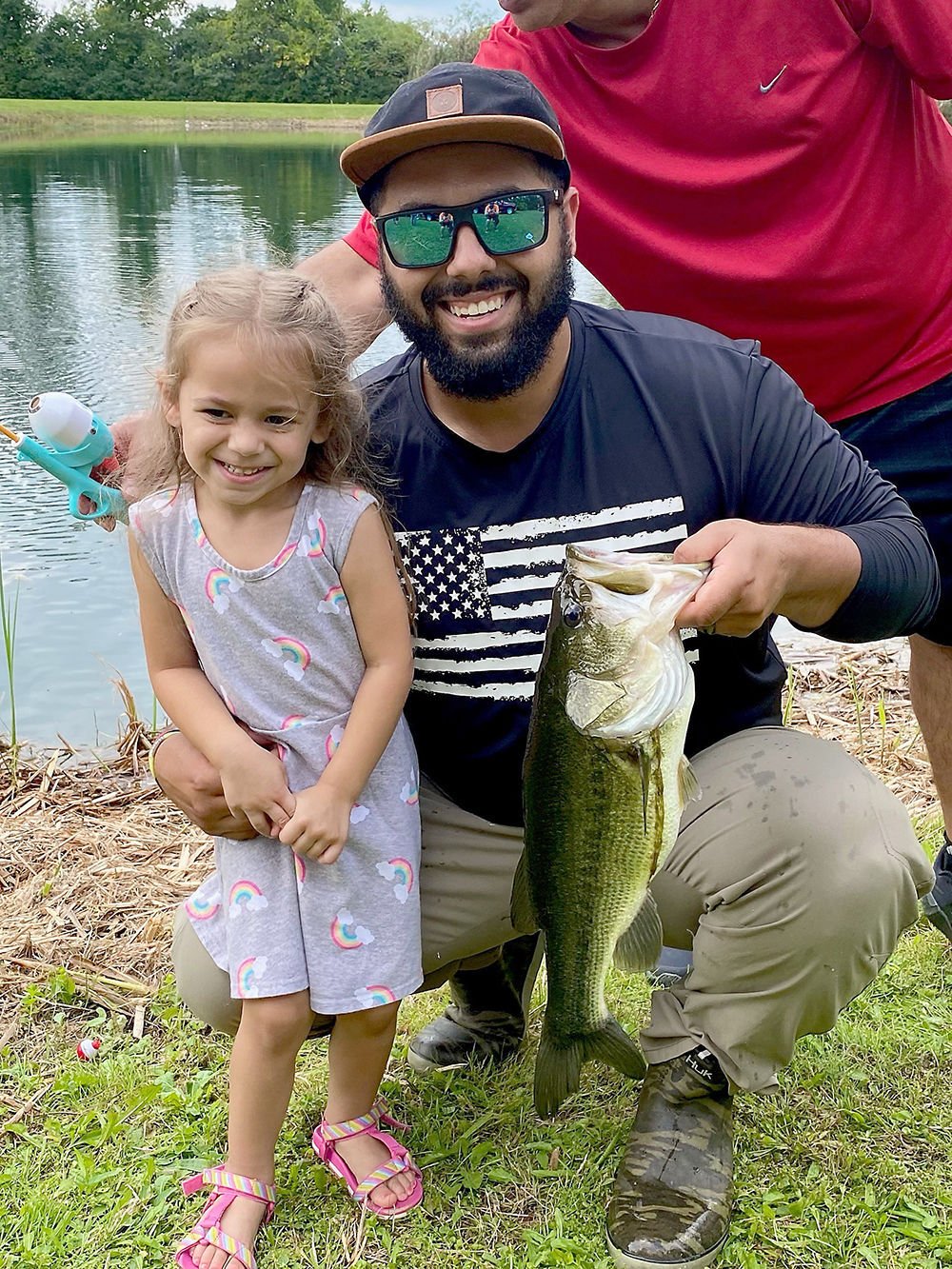 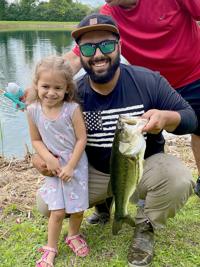 Giana Grillo, 3, and her dad, Alex, with her catch Sept. 18 at MacDougall Sportsmen’s Club in Fayette. Using a “mean” cast, she caught it on her Moana pole that she received as a gift.

Giana Grillo, 3, and her dad, Alex, with her catch Sept. 18 at MacDougall Sportsmen’s Club in Fayette. Using a “mean” cast, she caught it on her Moana pole that she received as a gift.

A Columbia County woman is this year’s recipient of the New York State Outdoor Writers Association’s “Pass It On” Award.

Each year, NYSOWA selects a member who is recognized as someone who should be acknowledged for his or her dedication to passing on our outdoor heritage, including an understanding of the role conservation plays and promoting an interest in outdoor sports.

The award was initiated by Bass Pro Shops and continued by NYSOWA.

Other ways that heritage is passed on: creating awareness through writing; helping organizations that promote these activities; and being involved in mentoring and educating directly.

Brosen has been a member since 2010. She is a renowned wildlife artist and an author. She has utilized her artistic talents to help others in and out of the outdoors community. She supports many hunting and sporting organizations, among them Ducks Unlimited and the National Wild Turkey Federation.

Although many of organizations commission her from time to time to produce paintings, Brosen quite often donates artwork (including expensive framing) for raffles and auctions. She does the same for local and regional gun clubs, trapping associations, and numerous other organizations to help raise funds for these organizations. She has been recognized for her work on several occasions, with the Northeast Big Buck Club among those groups honoring her.

Brosen is a champion of women’s involvement in the outdoors. She has mentored women and young people in the field and remains eager to share her knowledge and learn from others. Her participation in the Becoming an Outdoors Woman workshop will no doubt be an asset to all who interact with her.

In addition, Brosen stepped into being a member of the NYSOWA Scholarship Committee enthusiastically and will help oversee the Becoming an Outdoors Woman program.

The weather was superb on Sept. 18, and 30 children, along with many adults, attended the annual National Hunting & Fishing Day celebration at MacDougall Sportsmen’s Club in Fayette.

The youngsters enjoyed shooting trap, target shooting, bow shooting, and — the favorite event of many — fishing at the club’s stocked pond. The children also were treated to rides on a side-by-side, goodie bags, and free gifts.

Will ‘Coach Rodgers’ have alternate sleeping quarters in wake of back pain before Packers’ win over Washington?

With win over Washington, Packers ‘feel good’ about where they’re at — but know challenges loom

Club members enjoyed sharing their love of the outdoor sports.

The club thanked all the sponsors that made the event possible, some of whom have been there from the beginning.

The state Department of Environmental Conservation will work to combat the parasitic sea lamprey in the coming week — specifically, on Catharine Creek in Schuyler County.

DEC will treat waters inhabited by juvenile sea lampreys in Catharine Creek Canal, from Montour Falls Marina to the mouth at Seneca Lake. Lampricide application preparations are scheduled to start Monday, with application planned for Wednesday. Application is weather dependent.

Typically, immature sea lamprey live in streams for 3-4 years before they become parasitic and descend into the lake to prey on other fish. Through the control program, DEC applies a lampricide called Bayluscide (niclosamide) to canal waters using a boat-mounted sprayer. Bayluscide is a selective pesticide that kills the immature, larval stage of the sea lamprey. It has been used extensively for sea lamprey control in the Great Lakes and Lake Champlain and was last used in Catharine Creek Canal in 2014.

The dosage of Bayluscide lethal to larval sea lampreys can be processed without harm by most other aquatic organisms. Some minor fish and aquatic invertebrate mortality is expected.

Fish within the Bayluscide-treated area may contain low-level concentrations of this compound for 14 days following treatment.

Signs will be posted along the treated areas.

Drinking water and water for other household uses will be supplied to affected people in the advisory areas upon request. Contact the DEC at (585) 226-2466 during normal business hours to request water.