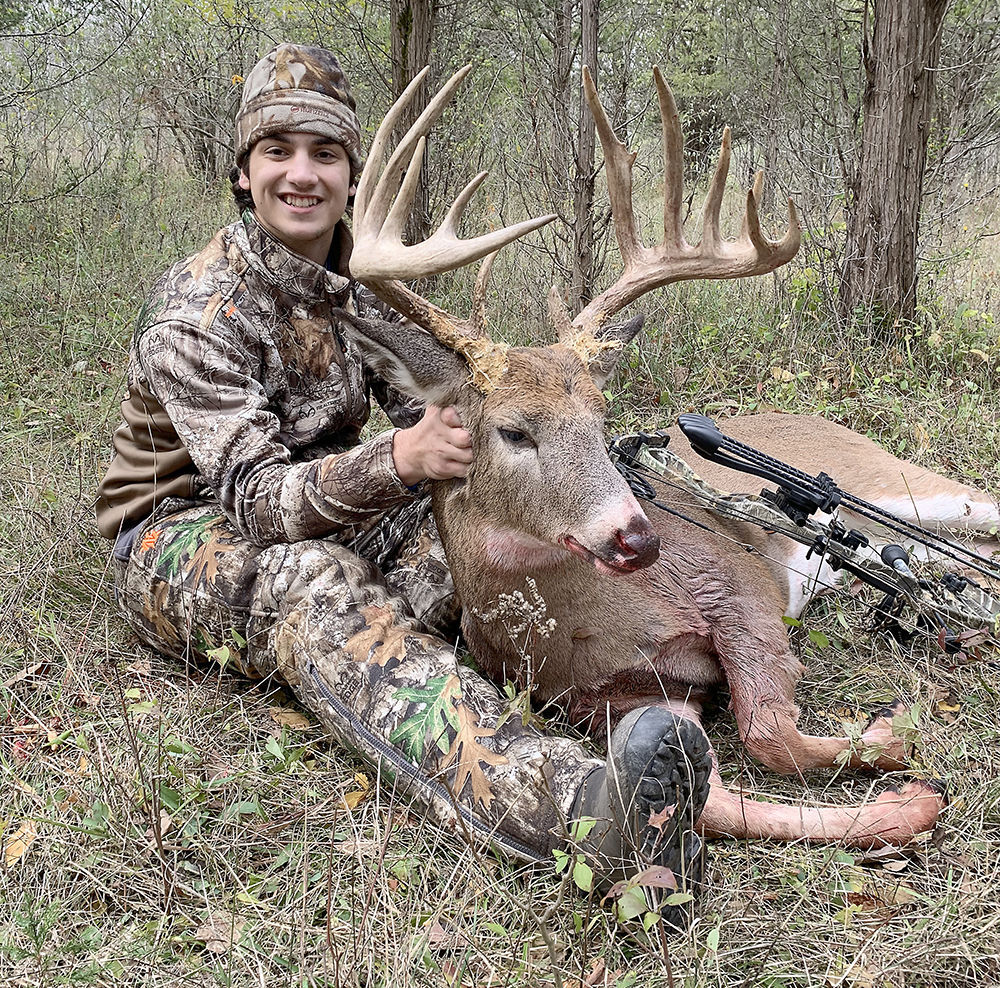 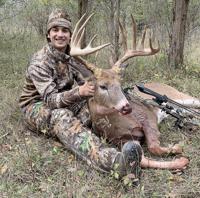 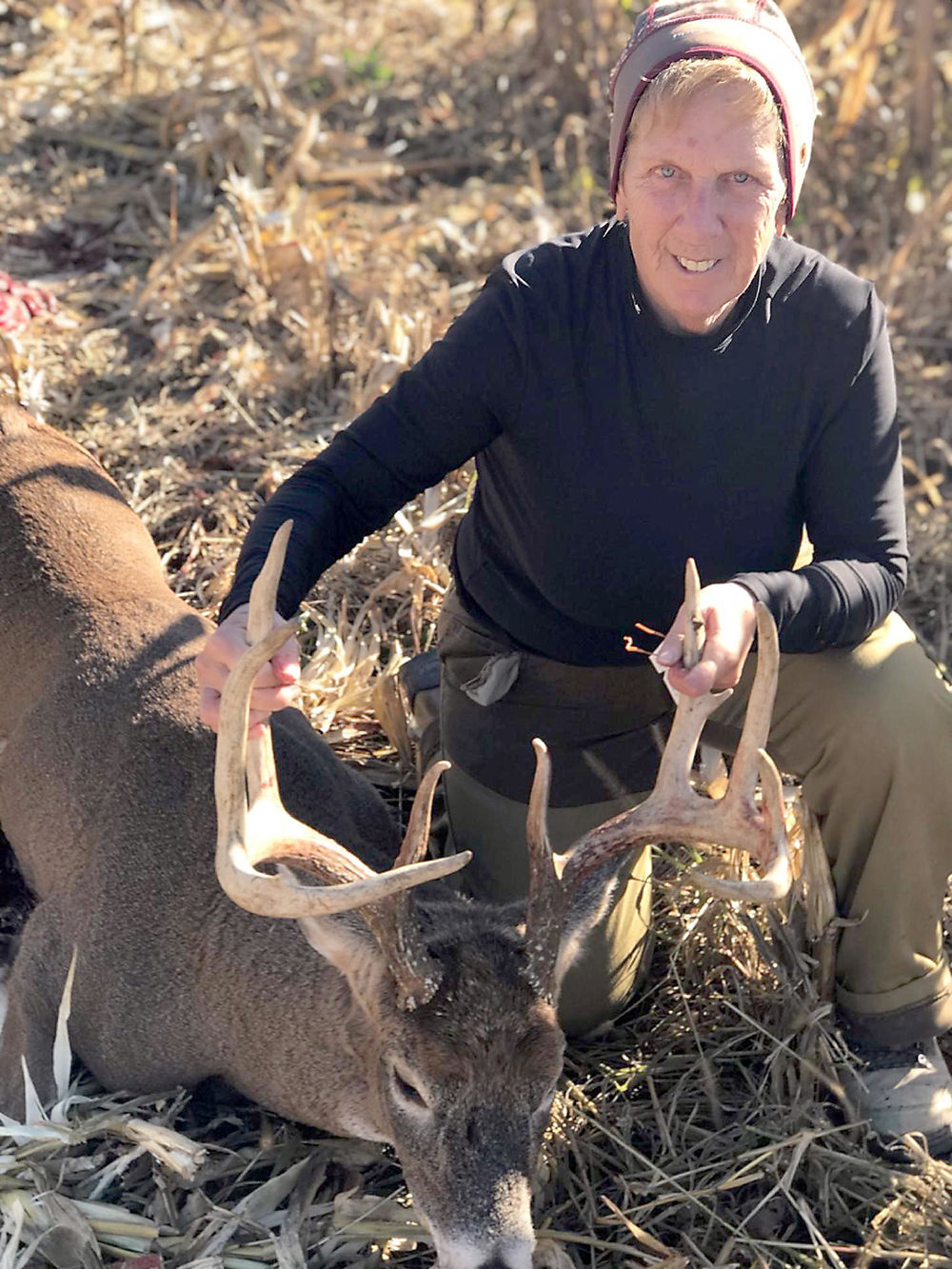 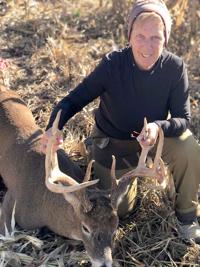 Seneca County resident Kathy Larsen said she has hunted deer for about 50 years with the idea of putting venison in her freezer. The 10-point buck she harvested recently is the biggest of her career.

Seneca County resident Kathy Larsen said she has hunted deer for about 50 years with the idea of putting venison in her freezer. The 10-point buck she harvested recently is the biggest of her career.

Of all the years that Kathy Larsen has sent me activities promoted by the MacDougall Sportsmen’s Club, I never glanced at her face. That all changed when the 75-year-old hunter sent me a picture of a 10-point buck. There she was, in the picture.

I told her she now had to give the readers a rundown of the hunt. She agreed, and the following are the facts — nothing edited. Incidentally, I thanked her for always promoting her club, a commendable task.

I started hunting about 50 years ago. I hunt turkey and deer. I hunt with a crossbow, shotgun, rifle, and muzzleloader.

I always hunted to put meat in our freezer and I never got a trophy until now. I even passed up some smaller bucks this season in hopes of seeing “the big one.”

On Nov. 10, I went out with my crossbow. It was pretty warm out. I have had game cameras out, and the 20-foot tripod showed a lot of activity. The wind was blowing from the south, so my scent went out into the large field I was overlooking. I also have read the wind; doesn’t matter if the bucks were in rut. I was out before light.

First, I saw a couple bucks chase a doe across the field by our woods on the opposite side of the field. Soon, two more bucks came out chasing the doe. They all disappeared into the woods.

A little later they all came out, still chasing the doe. They were running all over on that side of the field. All of a sudden, the doe disappeared. The bucks were looking all over for it. Two of the bucks went back into the woods, and there were two bucks left smelling and looking for the doe.

It took a while for one of the bucks to jump the doe (who was laying down in the field of radishes and oats). She ran into the woods again with the two bucks after her. In a while two bucks came out of the woods smelling for doe scent. I noticed one was huge. The smaller buck went back into the woods, and the huge buck was going around the field smelling.

He was about 500 yards from me. I took out my doe bleat and did it once. He heard it and raised his head but continued smelling around. All of a sudden, he decided to check out the bleat and headed my way. I couldn’t believe it!

I had my crossbow ready on the railing, and he was coming kitty corner, so he did not smell me. There are two trees one on my right and one on my left. He was coming behind the left tree, and I could not see him until he was to my stand. I could not shoot from the railing or move to put it under the railing. He went around my stand to the right.

I stood up, moved my crossbow, and he stopped. I could not find him in my scope; he was 13 yards from my stand. I finally found his body in the scope and shot. Of course, he ran in the hedgerow, crossed a ditch, and I saw his rack as he went in the cornfield in back of me.

I texted my neighbor to get permission to go in the corn and look for the buck. Then I called my husband and told him I shot at a big one.

I shot at 8 a.m., and I waited about 15-20 minutes to get down. I retrieved my arrow, and it was covered with blood. I called my husband and told him I hit it, so he was going to come out and help me track it. I found a few drops of blood where I shot and started searching the hedgerow for more blood. I went back and forth and could not find any.

My husband and I went in the cornfield searching. We spent about an hour searching but could not find the buck. We met up again looking for blood. My husband was walking by the rows of corn, looked down one row and saw the buck not too far in. He hollered and told me to come here.

Thank God he found him! I was silently praying that I would lose this buck. Our neighbor brought his tractor to get him for us. Then, of course, I called the Whitetail Obsession Buck Club for them to score it. It scored 147 7/8. Low and behold, as of right now I have the top buck.

I have never been so entertained while hunting then on this day. I never saw four bucks chasing one doe like they did, and I never saw a doe lay down to hide from them. I could tell she was getting tired.”

By the way, the 20th edition of the “New York State Big Buck Club Record Book” is available, although quantities are limited. It costs $25, plus an additional $5 for shipping and handling. Allow 4-6 weeks for delivery.

To order a copy, email Mike Deming at dembob66@gmail.com.

The gift of camping

Gift cards and electronic gift certificates for stays and services at all New York State Department of Environmental Conservation campgrounds are available for purchase online.

DEC camping gift cards are physical cards mailed to the designated recipient. Electronic gift certificates will be emailed to the purchaser for printing and/or emailing to the recipient.

DEC operates 52 campgrounds and five day-use areas in the Adirondack and Catskill forest preserves. The summer camping season runs through the summer, with some facilities remaining open during fall foliage and hunting seasons.

For more information on DEC-operated campgrounds, including a list of campgrounds and schedules, visit www.dec.ny.gov/outdoor/camping.html, or call DEC’s Bureau of Recreation at (518) 457-2500. To make reservations at any of these camping facilities, call ReserveAmerica at 1-800-456-CAMP (2267) or visit the ReserveAmerica website at https://newyorkstateparks.reserveamerica.com.

Sixty cisco were implanted with small acoustic tags, and 20 receivers were strategically placed throughout the lake to record tagged fish movements. DEC, USGS, and Cornell University are collaborating to study the movements, survival, and habitat use of cisco. This was the third year of stocking, with a total of 399,000 cisco stocked.

Cisco were last collected in Keuka Lake in 1994. Recent changes relating to decreasing lake productivity and a collapse in the non-native alewife population provided the opportune time to attempt cisco restoration in Keuka Lake. Cisco are a native species that are generally better suited than alewives for low productivity waters, are longer lived, and can be harvested recreationally.

Download the most recent forage assessment study on Keuka Lake at https://bit.ly/340RGYM.