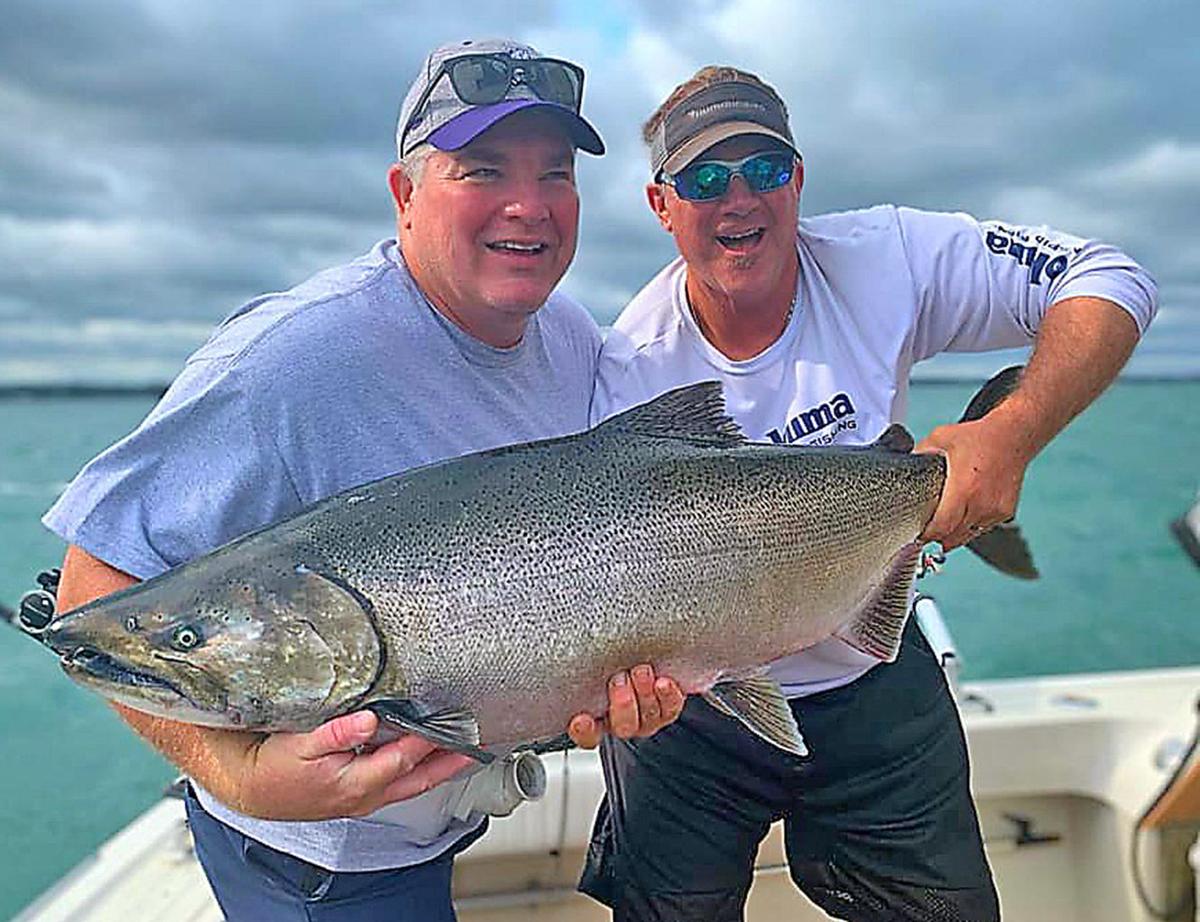 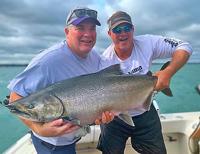 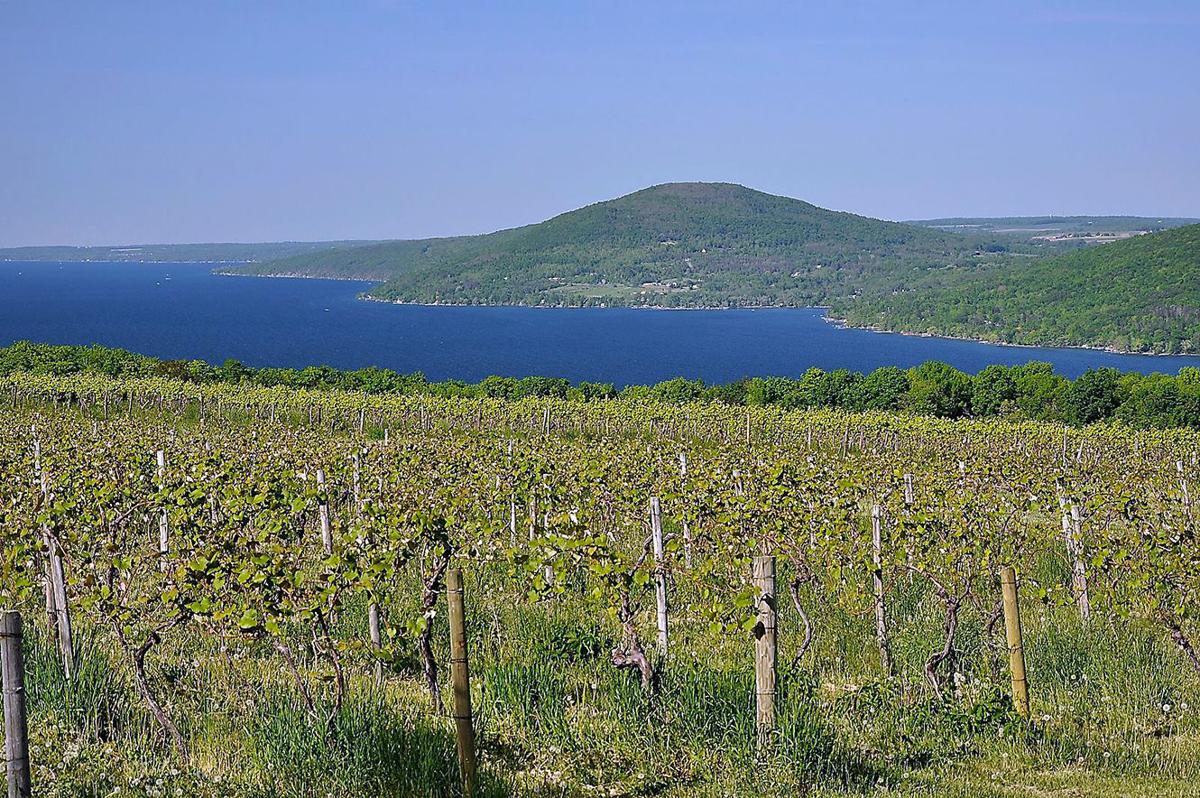 The Finger Lakes Land Trust has acquired Bare Hill on the east side of Canandaigua Lake.

The Finger Lakes Land Trust has acquired Bare Hill on the east side of Canandaigua Lake.

In the Fall Lake Ontario Counties Trout and Salmon Derby, thousands of anglers competed for a $25,000 grand prize. Whoever weighs in the largest salmon by the end of the 18-day contest walks away with the big check.

This year, it was Tim Anderson of Columbus, Ohio.

Anderson’s 31-pound, 5-ounce king salmon ruled the field in the event that began Aug. 21 and ended Sept. 7. He was fishing out of Olcott, Niagara County, with charter captain Vince Pierleoni of Thrillseeker Sportfishing.

“We started fishing the derby six years ago when a group of friends made the decision to fish Lake Ontario and the LOC Derby,” Anderson said at the awards gathering in Sodus Bay. “After doing research on the internet, we went with one of the winningest skippers on the Great Lakes to increase our odds for success.

“Through the years, we have placed numerous fish in the money and it finally paid off big time this year.”

They headed onto the lake Aug. 29, and the weather forecast didn’t look good. As they motored out with Pierleoni and his mate, Nick Glosser of Newfane, Niagara County, they managed to work the waters west of Olcott in 75- to 80-foot depths out of Pierleoni’s 38-foot Viking, “Thrillseeker II.” They needed every foot of that boat too.

Using a DW Diver 140 feet back on a No. 3 setting, the DW 42nd Spoon took a hit and stayed deep. They were debating whether or not it was a salmon or a big brown. After its first explosive run, they knew it was a king salmon. Three more runs and 30 minutes later, they finally netted the big king at the back of the boat … as the winds really started to kick up.

It was time to go in.

“It was the largest salmon that I’ve ever caught,” Anderson reported. “We’re going to split up the money so that we will have future fishing trips for many years to come.”

Having a little bit of luck helps too.

Ohio had been placed on New York’s COVID-19 watch list, and many anglers wondered if they would be able to make the trip for the derby. When Ohio was taken off the list Aug. 11, it was game on for the LOC Derby.

Ohio was put back on the list Sept. 8, a day after the LOC Derby ended (it has since been removed from the list again).

First place in the Salmon Division, and the second-biggest king overall, was almost a repeat winner. Reese Scott of Nicholson, Pa. reeled in a 31-pound, 2-ounce king salmon while fishing out of Fair Haven Sept. 3. He was fishing with Cody Scott, also of Nicholson, and Donald Stacknick of Dalton, Pa., in the same general area off Moon Beach where the trio caught the Summer Derby winner in July; Stacknick was the lucky angler for the $10,000 grand prize then. This time, they earned a check for $5,000.

They were fishing in 135 feet of water, using 375 feet of Blood Run copper line, pulling a blue and silver J-plug to catch the king salmon. It was a personal best for Reese … during an LOC Derby event, that is. Cody is next in line next year if lightning decides to strike a third time.

Second place in the Salmon Division was a 30-pound, 14-ounce king salmon reeled in by Todd Flint of Salisbury, Vt., while he was fishing off Oswego with charter captain Ernie Lantiegne of Fish Doctor Charters. He was fishing with Paris Rinder-Goddard of Bristol, Vt.; Molly Flint, also of Salisbury; and Jack Bussey of Albany aboard Lantiegne’s 28-foot Baha. Around noon, the salmon grabbed a homemade silver-and-green fly behind a Pro Troll flasher and screamed out 1,600 feet of line. Thirty minutes later, they netted their prize fish.

They were fishing in 146 feet of water, five feet off the bottom. Flint is the lure manufacturer of the Crazy Ivan Lure Company, a popular bait for landlocked salmon on Lake Champlain.

The largest youth salmon was a 27-pound, 12-ounce king weighed in by Carson Mash of Delmar, Albany County. He was fishing aboard the Double-Whammy out of Pulaski using a Pro Troll flasher and an A-Tom-Mik fly.

In the Steelhead Division, the Pinkham trio of anglers — John of Olcott, his son Shawn of Sanborn, Niagara County, and his brother Mike of Newfane — fished the waters around the Niagara Bar. And, for the second derby in a row, they caught a winning fish in a category they were not targeting.

“We were fishing for salmon around the red can at the drop-off,” said Shawn, who reeled in the winning steelhead of 15 pounds, 9 ounces. “The dipsy rod went off, set back 160 feet on a 3.5 setting. The fish hit a white Spin Doctor with a blue fly, and we thought it was a small salmon. We didn’t know it was a steelhead until we netted it.”

In the Greater Niagara Fish Odyssey Derby that ended Aug. 30, the Pinkham crew caught the winning walleye while they were fishing for salmon on the fringe of the Niagara Bar.

The second-place steelhead came from Olcott when Nick Shelden of Horseheads weighed in a 12-pound, 6-ounce steelhead. Fishing out of his 25-foot Sportcraft named “Lucky Strike,” the boat lived up to its name when the steelie munched on a watermelon-colored Moonshine spoon on the end of 10 colors of lead core line over 500 feet of water. He was fishing with Merrill Seville of McConnellsburg, Pa., and Walt Myers of Horseheads; Myers caught a 16th-place steelhead during the fall contest.

It is not the first time Shelden has been in the winner’s circle: He won the ESLO grand prize back in 1990.

The largest youth steelhead was a 10-pound, 7-ounce fish checked in by James Respicki of McKean, Pa., while fishing out of Olcott aboard the “Riptide.”

In the Brown Trout Division, Maria Jackson of Rochester was experiencing a bit of fishing anxiety. On the first day of the LOC Derby, she reeled in a personal-best 17-pound, 14-ounce brown while trolling west of Rochester with her dad and mom, John and Jean, aboard their 20-foot Key West boat, “Sea Trick.” Then, Maria had to play the waiting game.

“We were fishing 90 feet down over 100 feet of water using a purple DW spoon off a rigger,” she said. “It took me about 10 minutes to bring the fish in.

“We found these browns earlier in the summer and stayed on them. My dad caught a ninth-place brown and my mom had the 20th-place brown too.”

Maria received her first-place check for $2,500 18 days later. When asked about how she was going to spend the money, without hesitation she said she was buying a new boat seat.

Hunters must purchase the bowhunting or muzzleloading privilege to participate in the late bow or muzzleloader seasons and may use all deer carcass tags valid during those seasons.

The proposal does not impact when snowmobile trails may open. Snowmobile trails are opened after the end of the regular big-game hunting season, subject to adequate snow cover and local agreements.

Details of the proposal are published in the Sept. 9 New York State Register at https://www.dos.ny.gov/info/register/2020.html.

DEC encourages the public to comment on the proposed regulations through Nov. 8. Email comments to WildlifeRegs@dec.ny.gov or write to Jeremy Hurst, NYSDEC Bureau of Wildlife, 625 Broadway, 5th Floor, Albany, NY 12233-4754.

I Bird NY Challenges are underway

Do you enjoy watching birds? I certainly do, and DEC has created two special challenges. One is for beginners, while the other is dubbed the Experience Bird Challenge.

If you are 16 or younger, a resident of New York state, and you have an interest in birds, take the I Bird NY challenge at https://bit.ly/32Hzovs. Find 10 common New York bird species and get a special certificate for taking the challenge, and be entered into a random drawing for birding accessories.

Some species are common and found in many places, while others are rare and may be limited to a specific habitat or part of the state, so everyone can find some of them. Learn more about these birds at https://bit.ly/2FJ6K42, where each species is profiled.

Both challenges are open through Sept. 30. All entries must be received by Oct. 14.

The Cornell Lab of Ornithology is offering a series of webinars exploring bird migration from every angle — from making migration forecasts to capturing the magic in documentaries.

All webinars are free, but those interested are asked to register to secure their spot.

The webinars began last week. Here are the upcoming sessions:

Want to know when a particular bird species will be migrating through your area? Learn how to use the eBird Status and Trends maps and see how they are created with Cornell Lab GIS Developer Tom Auer.Register at https://bit.ly/35IzQLK.

Join the Conservation Media team for a virtual screening and panel discussion on what goes into making a natural history film. The event will include a free, family-friendly activity with tips from professionals on how to create your own natural history film at home.

Migration Madness: Celebrating Migration Together-Family Event, 11 a.m. to noon and 2-3 p.m. Sept. 26. Celebrate with families across the country during this live event where participants will learn about migration and participate in games and activities. Suggested age range is grades K-5.

The property is located in the town of Middlesex, Yates County, in close proximity to New York State’s 393-acre Bare Hill Unique Area.

Bare Hill is known in the region for its scenic views as well as its cultural significance in the creation story of the Seneca Nation. It represents FLLT’s eighth project in the area, and provides an important connection between state lands on Bare Hill and two other parcels previously acquired by the trust. When public funds are available, all three parcels will be transferred to the state Department of Environmental Conservation as a single, 45-acre addition to state land.

“We are fortunate that the Finger Lakes Land Trust continues to preserve ecologically sensitive and culturally significant land in the Canandaigua Lake watershed,” trust board member and Canandaigua resident Wade Sarkis said. “These are beautiful properties and many are available for the public to enjoy now, as well as for generations to come.”