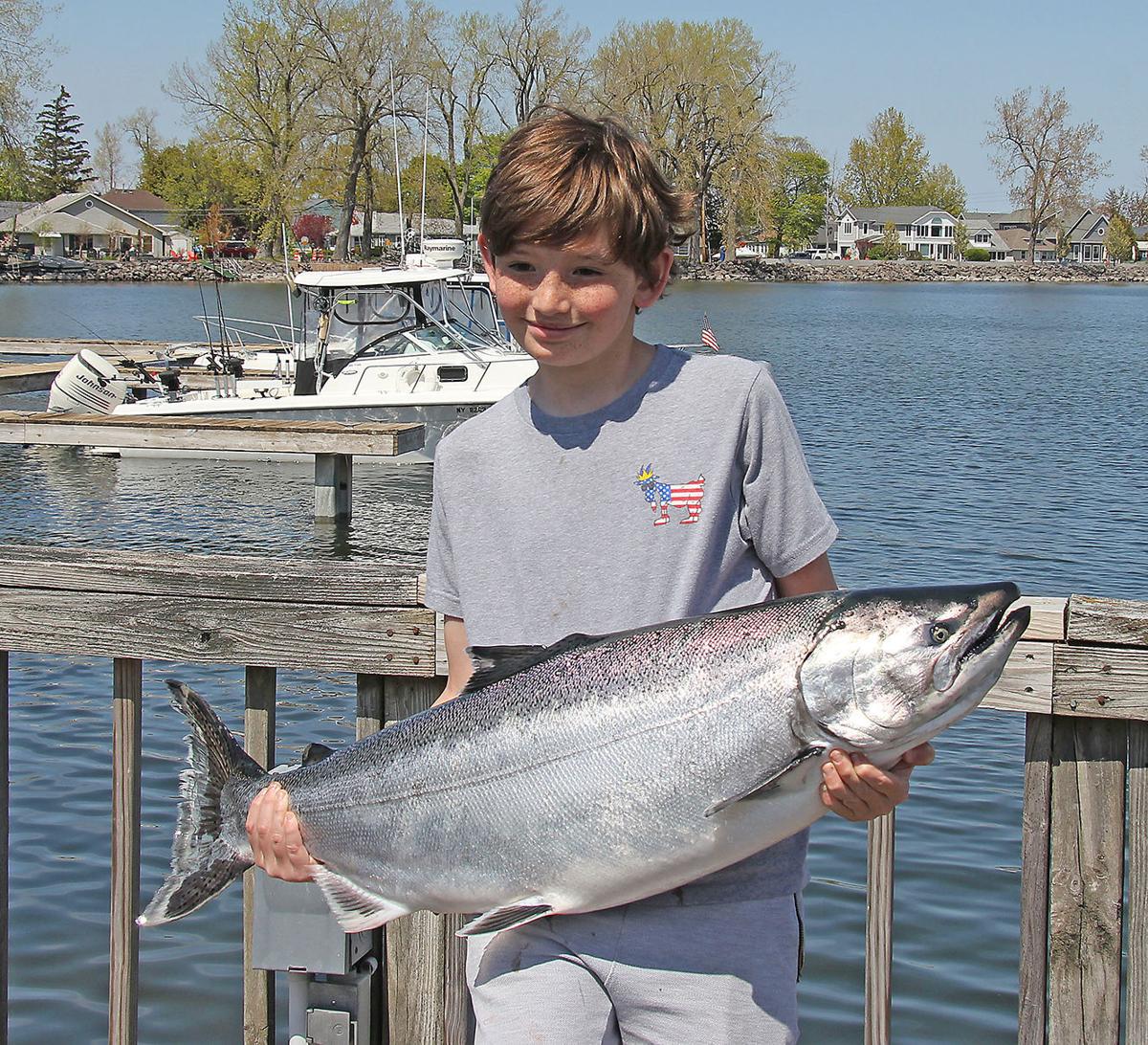 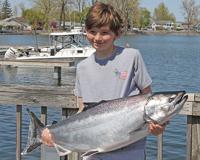 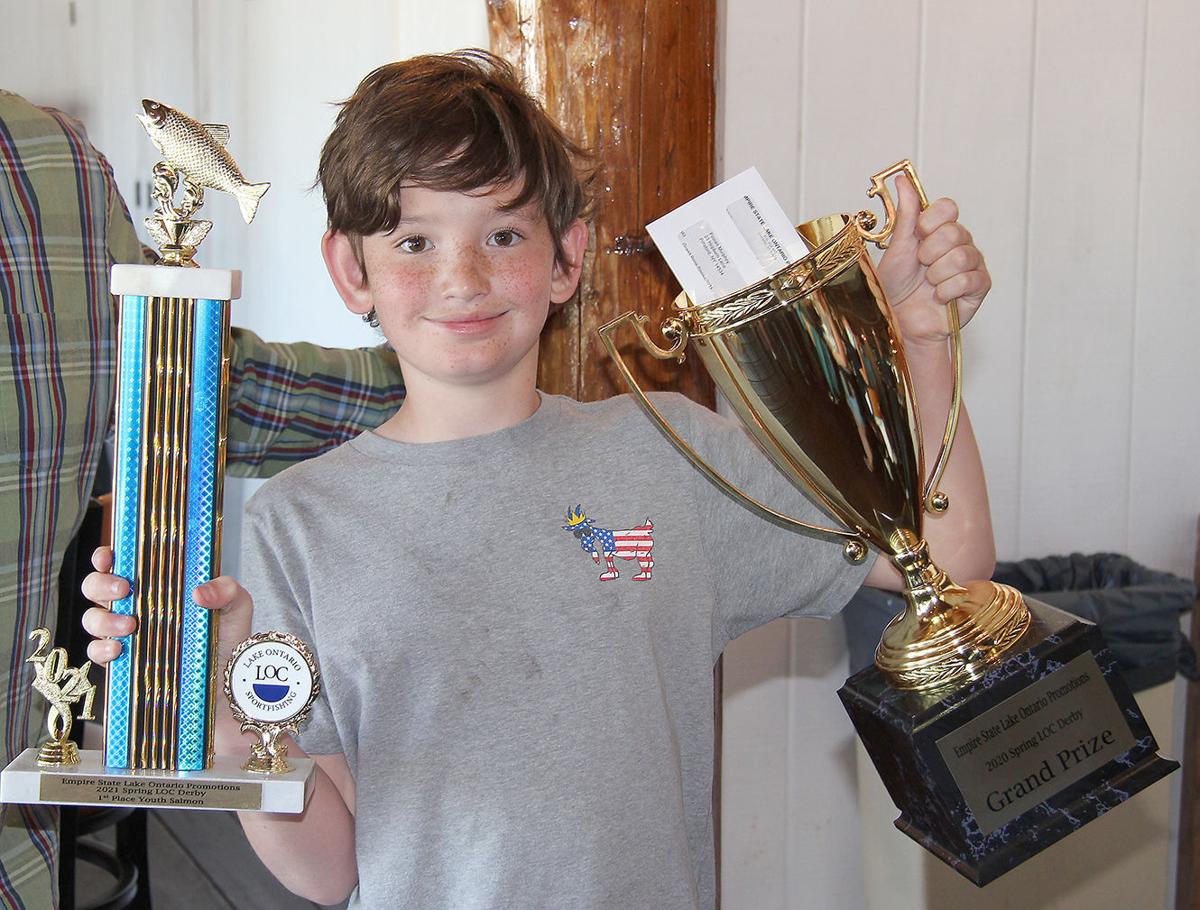 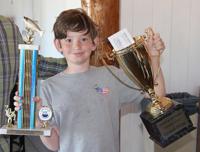 Finnan Murphy was still excited about what had happened earlier in the day May 16, the final day of the Lake Ontario Counties Spring Trout and Salmon Derby.

At 9:30 a.m. that day, the 12-year-old Pittsford resident hooked up with the biggest salmon of his young life while fishing out of Wilson in Niagara County with charter captain Kip Mammano of RochesterSportfishing.com.

Also on board were Finnan’s father, Shane, and two other father-son pairs from Pittsford, Joel and Josh Bezel, and Jeff and Jacob Liberman, as part of an annual trip on this Great Lake. Thirty minutes later, they netted the 26-pound, 10-ounce salmon and took it directly to the Wilson Boatyard scales for their official weight.

The Spring LOC Derby, which began May 7, enjoyed some good weather and great fishing across the lake. The salmon seemed to focus on the lake’s western basin, and it is where Mammano was fishing throughout the derby. They headed west out of Wilson and tried the Niagara Bar, but derby and tournament boat pressure made it difficult. Mammano steered his 275 Crestliner clear and headed near 4-Mile Creek. Running a wire diver set at 2.5 out 100 feet, the salmon hit a Yellowtail Warrior spoon and screamed out line.

Three long runs later, the Barker Road Middle School sixth-grader completed the task of reeling in the winning fish, a personal best as far as size.

“Most of it will go to my college fund,” the young Murphy said. “I would like to get my mom and dad a present, and maybe get a few toys and video games.”

This was the sixth year the father-son groupings had been fishing with Mammano, and it paid off big time.

The last-minute heroics for Murphy came at the expense of 76-year-old Walt Zebker of Grand Island. Fishing with charter captain Mike Mongan and Mike Hooper of Grand Island, Team Beach House was fishing the Niagara Bar as they do every spring derby. On the final Saturday, Mongan’s 22-foot Penn Yan was working 120 feet of water, northwest of the red buoy marker, when a big king hit a NBK Michigan Stinger spoon 70 feet down. Twenty-five minutes later, Zebker was holding a 25-pound, 12-ounce king salmon.

They called Lisa Drabczyk at Creek Road Bait and Tackle to see if they could weigh the fish. No, they were told, the scales didn’t open until 9 a.m. So, they fished until the scales opened.

“We didn’t even get all of the rods in the water when the fish hit,” Mongan said. “It was before 7 a.m.”

They won $2,000 for first place in the Salmon Division, plus $500 for big fish of the day. It also was the largest salmon caught by a member of the Lake Ontario Trout and Salmon Association, earning another check for $1,000.

Second place in the Salmon Division was derby diehard Ken Champagne of Chillicothe, Ohio, with a 25-pound, 8-ounce king caught May 11. Fishing with Brian Marketich of Beaver Falls, Pa., their winning catch was surrounded by good karma.

“We were fishing the Niagara Bar every day and slept in because of the winds,” Champagne said during the awards ceremony at Captain Jack’s Goodtime Tavern in Sodus Point. “As we headed out, we saw a small deer trying to swim across Lake Ontario to Canada. We knew it would never make it, so we forced the deer to turn around and swim back to shore.

“We wasted about 45 minutes, but we felt it was worth it. Good karma.”

In the Brown Trout Division, Scott Libihoul of Clay caught a 20-pound, 1-ounce trophy on the second day of the derby — a personal best — to win a check for $1,000 and big fish of the day for $200. He was fishing with Bruce Raggi of Farmington aboard a 25-foot Pro Line named Salmon Illa near Bear Creek, Wayne County, in 15 feet of water. Using a “gold stickbait” 125 feet back behind planer boards, they caught the fish at 9:45 a.m.

Second place was Jeff Raggi of Fairport, Bruce’s cousin, with a 19-pound, 5-ounce brown. He was fishing with Richard Redsicker of Ontario and Jake Emmel of Sodus aboard the 25-foot Pro Line named Salmon Illa. They were fishing west of Bear Creek in 17-20 feet of water using a green-and-blue Koyote Ugly Spoon 8 feet down on the rigger with a 40-foot lead.

In the Lake Trout Division, Mike Kimsey of Lacona earned the $1,000 and big fish for the day in his division ($200) when he hauled in a 24-pound, 12-ounce fish on Mother’s Day. It was a personal best, and it came at a perfect time. He was fishing with his friend, Charlie Trump of Sackets Harbor, aboard the Ramblin’ Rose, a 25-foot Chaparral.

They were fishing Henderson Harbor out of Stoney Creek, using cowbells and a lemon-lime Spin-N-Glo to drag the bottom in 150 feet of water. The fish hit at 10:30 a.m.; it was the final fish of their day. Trump also put a 20-pound, 10-ounce laker on the board May 14, using the same tactic, to place third in the division.

The second-place lake trout was caught by Cassidy Foltz of Springwater, a 20-pound, 14-ounce fish. He was fishing with his father, Ron Folts of Springwater, aboard his dad’s 20-foot Trophy Bayliner “Against the Wind” near Braddock Bay, in 170 feet of water, using a green hammerhead cowbell setup with a green Gambler Rig. It was close to a personal best for Foltz, catching it the final morning of the derby at 8 a.m.

The youth winner in the Lake Trout Division was Connor Vogt of Ontario. He was fishing with Richard Redsicker of Ontario near Pultneyville, on the bottom in 135 feet of water, using cowbells rigged with a white with green dots spin-n-glo. He broke his personal best lake trout four times on this May 15 trip.

In the Walleye Division, brothers Paul and Richard Farmer, both of Dexter, managed the perfect 1-2 punch by fishing out of their 16-foot Lund near Point Peninsula. Paul’s winning fish was a 12-pound, 8-ounce ’eye he caught on May 13 at 9 a.m. in 30 feet of water. He was using a blue Husky Jerk 100 feet behind a planer board.

Richard Farmer caught his second-place fish, weighing in at 12 pounds, 2 ounces, at 7:30 a.m. on the final morning of the 10-day contest. He was also using a blue Husky Jerk stickbait, 150 feet back behind boards over 18-20 feet of water.

For a complete list of winners, check out www.loc.org.

As most of you know, getting kids outdoors is important for their health and well-being, as well as the continuation of conservation efforts in the Finger Lakes, the state, and the nation.

The Youth Outdoors Hunter and Waterfowl Camp is Aug. 16-20. Youth ages 11-15 will explore the tradition of hunting while obtaining their state Hunter Education and Waterfowl Education certificates. Young hunters will learn about wildlife management, habitat, and how to be a positive role model for sportsperson activities.