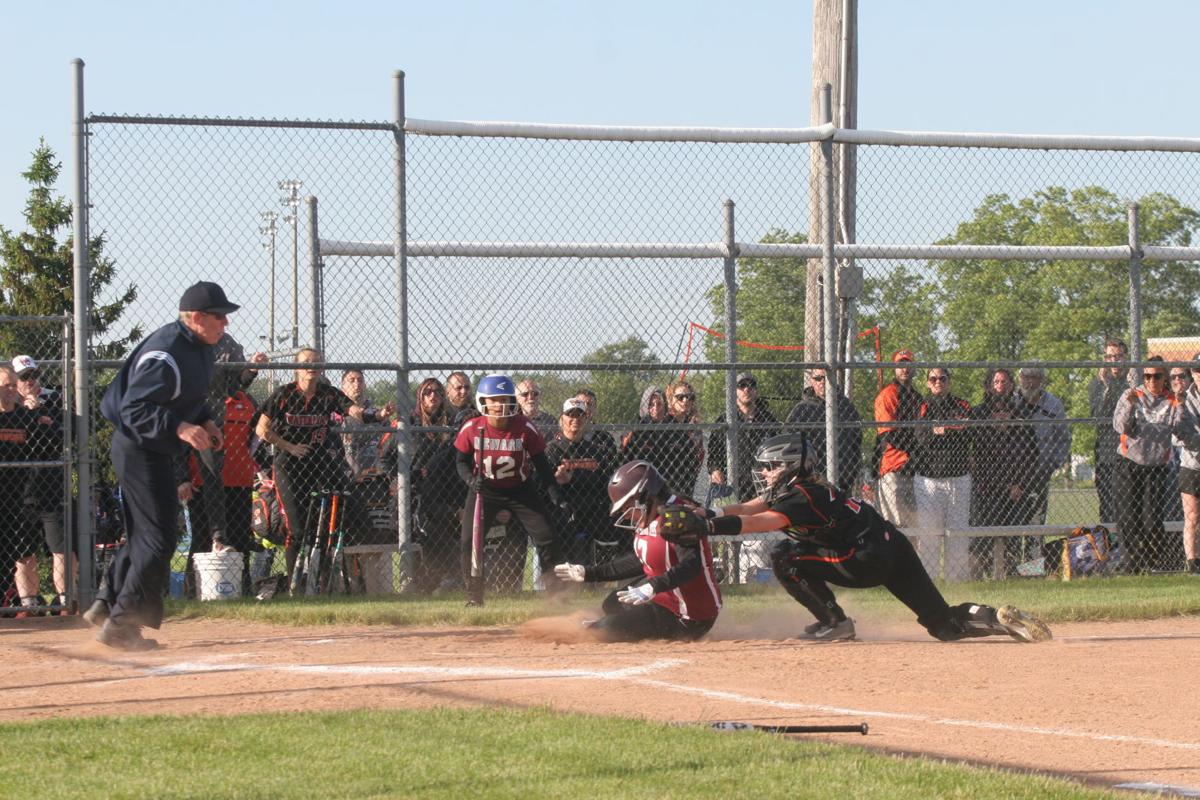 Newark senior Jasmine Bueso (17) is tagged out at home plate by Waterloo catcher Emma Smithers (13) to keep the score at 4-2 in favor of Waterloo. Bueso attempted to score from first off of a double by Hannah Fisher. 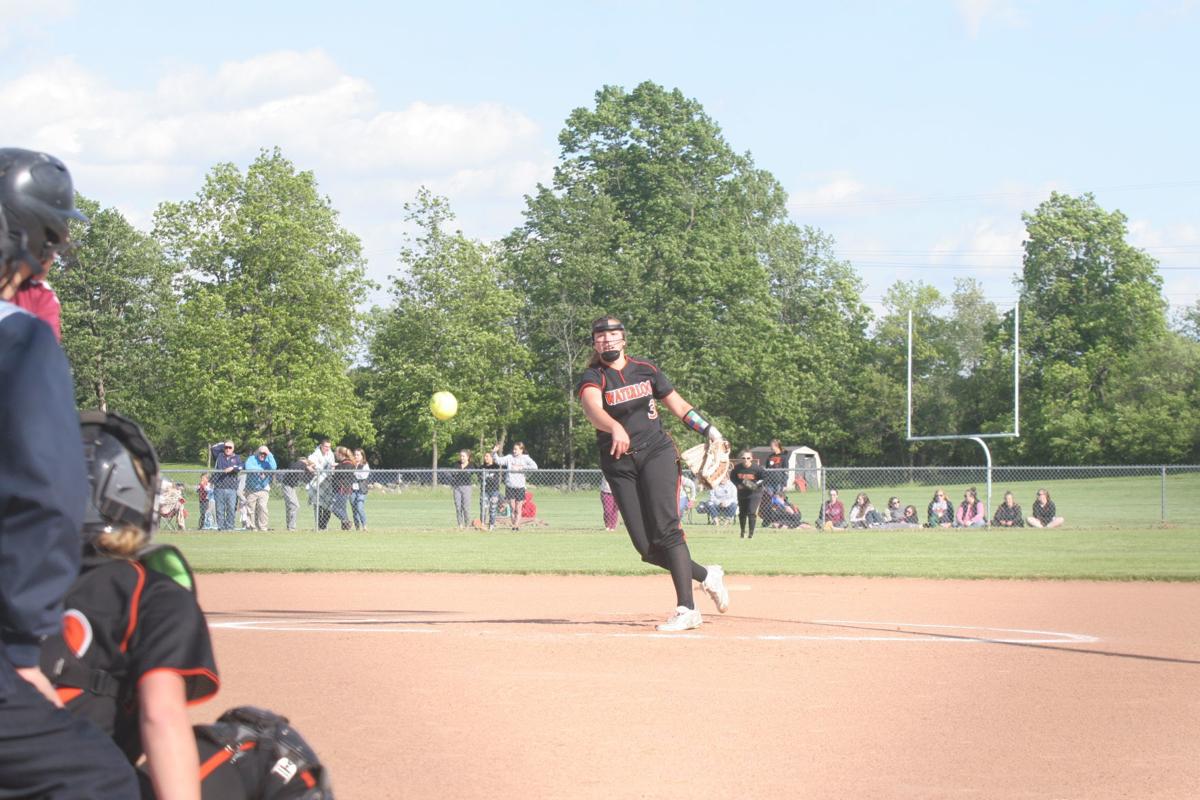 Waterloo pitcher Morgan Kapp (3) delivers a fastball to home plate in the top of the third inning. Kapp ended with six strikeouts and one walk.

Newark senior Jasmine Bueso (17) is tagged out at home plate by Waterloo catcher Emma Smithers (13) to keep the score at 4-2 in favor of Waterloo. Bueso attempted to score from first off of a double by Hannah Fisher.

Waterloo pitcher Morgan Kapp (3) delivers a fastball to home plate in the top of the third inning. Kapp ended with six strikeouts and one walk.

PHELPS — Not too often are fans treated to two heavyweights clashing in a championship or state qualifying game. There is often too much parity in a sport like softball for that to happen.

But in the Section V Class B state qualifying game the two teams with the most regular season wins clashed.

Waterloo and Newark traded blows in a thrilling game. In the end, Waterloo was able to outlast Newark and advance to states with a 5-3 victory.

Newark and Waterloo were respectively seeded one and two at the conclusion of the regular season.

They faced off twice in the regular season with Waterloo taking both games. While from the outside it may look to be an advantage for the Indians, head coach Kierstyn Decory felt differently.

“I think it was actually a disadvantage for us,” Decory said after the win. “It’s hard to beat a team three times. It’s very mental. Both times we played them was a close game, so we knew it was going to be a crazy game.”

The Reds and Indians both had their best pitchers on the mound for the entirety of the game. Sophomore Tia Brown for Newark and Junior Morgan Kapp for the Indians.

Waterloo’s offense was ready to go from the first pitch.

After a leadoff walk and wild pitch, sophomore eighth-grader Kennedy Beniamino singled into right field and the Indians jumped out to an early 1-0 lead. Beniamino would end up going 3-3 at the plate with two RBIs.

Following a speedy top half of the second inning and after a heads-up double play from Newark, the score remained 1-0 in favor of Waterloo heading into the third inning.

Kapp would again pitch a stellar half inning and in the bottom of the third, she helped herself out by hitting a two-out single to keep the inning alive. Beniamino continued to be hot at the plate and smoked an RBI double to bring home Kapp for a 2-0 Indians lead.

Newark had trouble figuring out Kapp’s pitch count. She struck out batter after batter until the top of the fifth inning.

The Reds finally got a hit off Kapp with an infield single from Talissa Rodriguez-Ramos. It seemed a single hit was all they needed to get back into the game.

Following Rodriguez-Ramos’ single was another single by junior Isabelle Santell. Alivia Braman then blooped a double to right field which allowed Rodriguez-Ramos to score.

Brown would then hit a sacrifice fly to center field, leveling the score at 2-2.

While the Newark dugout and sideline couldn’t have been any louder, it only seemed to light a fire in Waterloo.

In the bottom half of the fifth Kapp hit a single, followed by another single from Beniamino. After a wild pitch from Brown, the runners advanced to second and third with just one out.

Captain Jordan Colegrove then hit an RBI groundout followed by a blistering RBI double that put the Indians back up by two runs.

They stopped Newark’s momentum right in its tracks and it was something that Decory could sense was coming.

“Once we see that we need to get back up on that (scoreboard), we get that job done,” she said. “That ignites us; that fires us up.”

It took five innings for the Reds to get on the scoreboard only to have it all taken away in the very next half inning, but the Newark Reds would not simply lay their bats down, they battled with every swing.

In the top of the sixth, Newark would threaten again with a single up the middle by Jasmine Bueso. Junior Hannah Fisher then clobbered a double that was two feet away from being a home run.

Hustling from first, Bueso was called out at home on a great throw, ending the inning.

Waterloo’s entire team jumped for joy after an incredible play. They used that momentum to their advantage in the bottom of the six. Junior Annie Smithers hit a bullet line drive right into the outfield gap. Her speed allowed her to slide safely into third base with a triple.

Newark pitcher Tia Brown then threw an untimely wild pitch and Smithers scored to give the Indians a 5-2 cushion.

Once again, Newark would not go down without a fight. With two outs, Alivia Braman hit an infield single followed by a bloop single to right field by Brown. Junior Leanna Murray then hit a groundball to third but hustled down the line to beat out the throw and Braman scored, making it a two-run game once again.

Kapp proved to be too much for the Reds. On the very next pitch, she recomposed herself — forcing a popout right back to her, ending the game and sending the Indians to states.

“I’m incredibly proud of this team,” Decory said. “I knew we had it in us.”

Waterloo will play the representative of Section VI at SUNY Brockport on Saturday. First pitch is scheduled for 3:30 p.m.