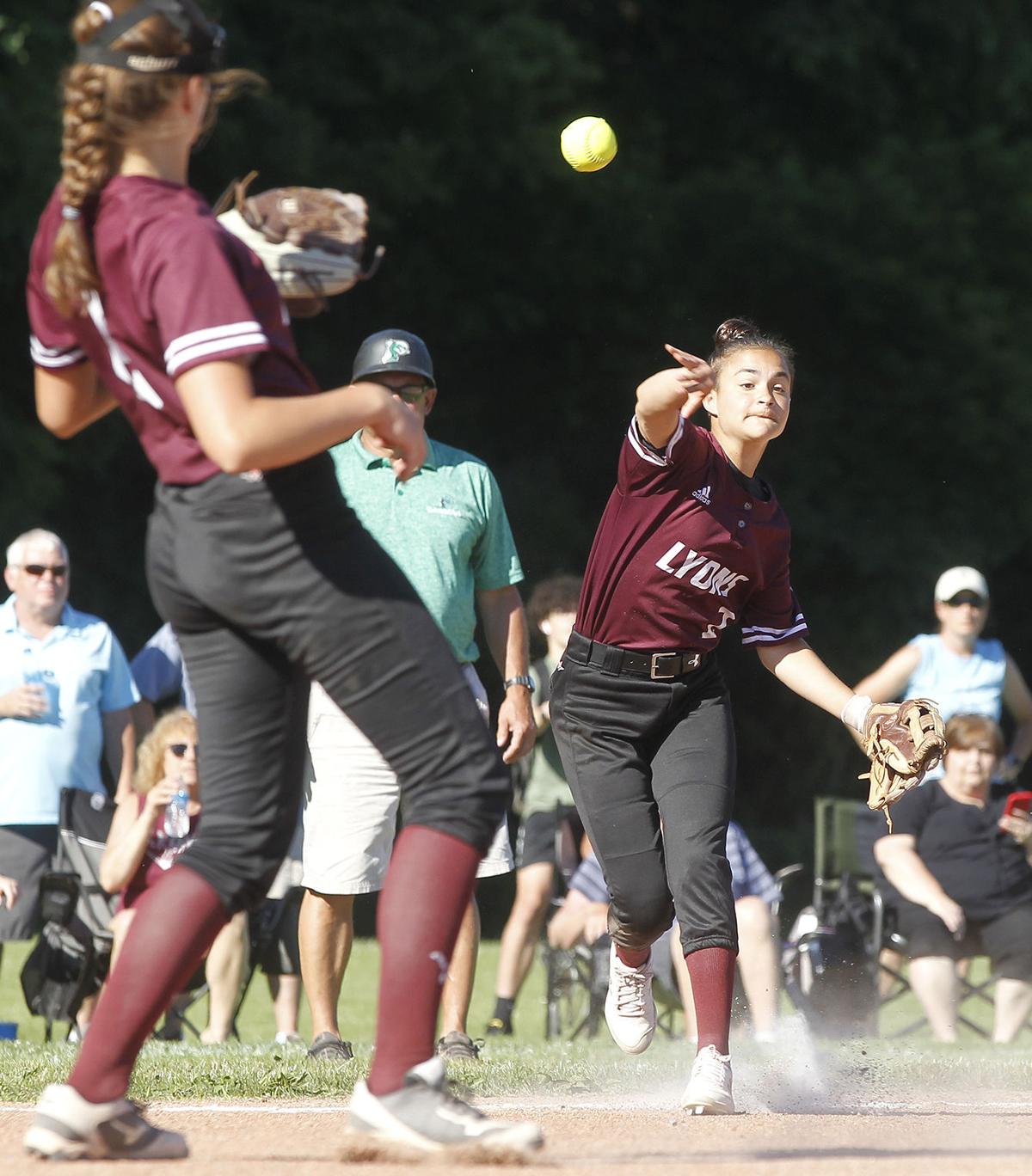 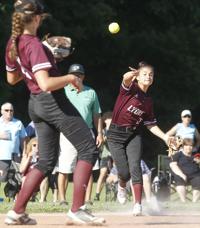 Third baseman Abby Gravino (2) throws out a Pembroke runner after a ground ball. 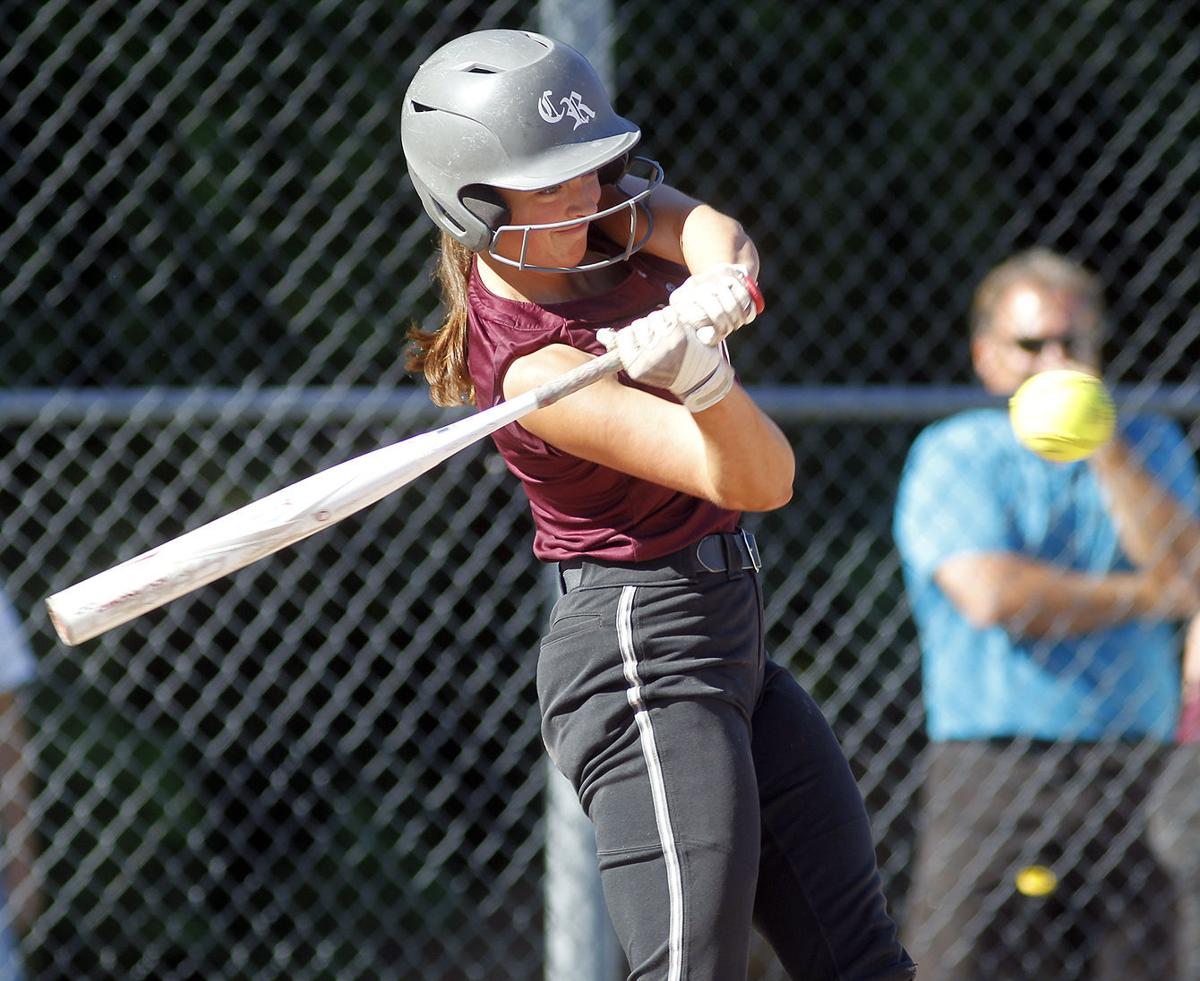 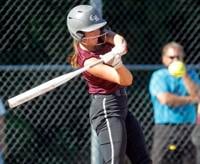 Lyons senior catcher Taylor Richardson (4) takes a swing and drives in Riley DeCola with an RBI triple to tie the game at 3-3.

Third baseman Abby Gravino (2) throws out a Pembroke runner after a ground ball.

Lyons senior catcher Taylor Richardson (4) takes a swing and drives in Riley DeCola with an RBI triple to tie the game at 3-3.

Pembroke junior Allie Schwerthoffer was the winning pitcher and went the distance as well.

The first batter of the game for Pembroke reached on a error and eventually found herself on third base with one out. However, Lester showed guts early on and pitched her way out of the first inning by striking out the next two batters.

Stone then willed herself around the bases, stealing second before advancing to third on a passed throw that reached center field. Eighth-grader Jayla Bell drove Stone to home plate on a groundout to second base giving the Lyons a 1-0 lead after one inning.

A quiet second inning was followed by a wild third inning. The Dragons attacked Lester’s first couple of pitches and put together three runs on four hits to quickly take a 3-1 lead.

That didn’t stop the Lions from answering in the bottom half of the inning.

Stone got things started once again with a hard ground ball up the middle that put her on first. Next up, senior Riley DeCola she reached base as well thanks to a dropped fly ball by the Pembroke left fielder. Stone advanced to second base on the error.

Senior Taylor Richardson then stepped in the batter’s box in a big spot. Although, the Division I UMass-Lowell-commit didn’t have to do much at first.

A wild pitch advanced both Lions runners into scoring positions and then a passed ball allowed Stone to score and make it a one run game at 3-2.

Richardson then knocked in DeCola with an RBI triple that glanced just off the Dragons right fielder’s glove and tied the game 3-3.

For Aaron Rodgers, a sarcastic ‘quiet offseason’ continues as Packers’ OTAs wrap up

Richardson is one of five seniors that coach Lockwood will be losing in her program.

“It’s been difficult flexibility-wise because of COVID,” Richardson said on her senior year. “I felt like we all came together as a team toward the end.”

“She’s amazing,” Richardson added about her coach, Lockwood. “She always keeps us pumped up and ready to play. Unfortunately, we fell short this game but she always keep us on our toes.”

“It’s a tight group of seniors,” Lockwood added on her senior group that’s been together for the last five years.

Richardson scored on another passed ball to give Lyons the 4-3 lead.

Freshman Kaylea Wagner continued the Lions offense with an RBI single to give her team a 5-3 lead after three innings of play.

The Dragons answered right back in the top of the fourth inning with a three-run, two-out rally to snatch the lead back, 6-5.

With runners on second and third base and two outs, Richardson grounded it hard off the Dragons third baseman’s glove. The shortstop then attempted to throw Richardson out at first but the throw was late, allowing junior Dionah Brown to knot the game back up at 6-6.

The game remained tied going into the fifth inning.

The Dragons continued to attack in the batter’s box with two outs. Pembroke took an 8-6 lead on three singles.

The Lions got one back to make it 8-7 in the bottom of the fifth inning with an RBI groundout by senior Taylor Watson that scored Lester.

Pembroke used their offensive momentum and scored two more runs in the top of sixth inning to go up 10-7.

The score remained the same in the top of the seventh inning when Lester was one strike away from getting out of a bases loaded, 0-out jam until Dragon eighth-grader Reagan Schneider smacked a single to right center field to score three runs on the play to go up 13-7.

By then, the Lions offense was tapped out and their 2021 season was put to a close.