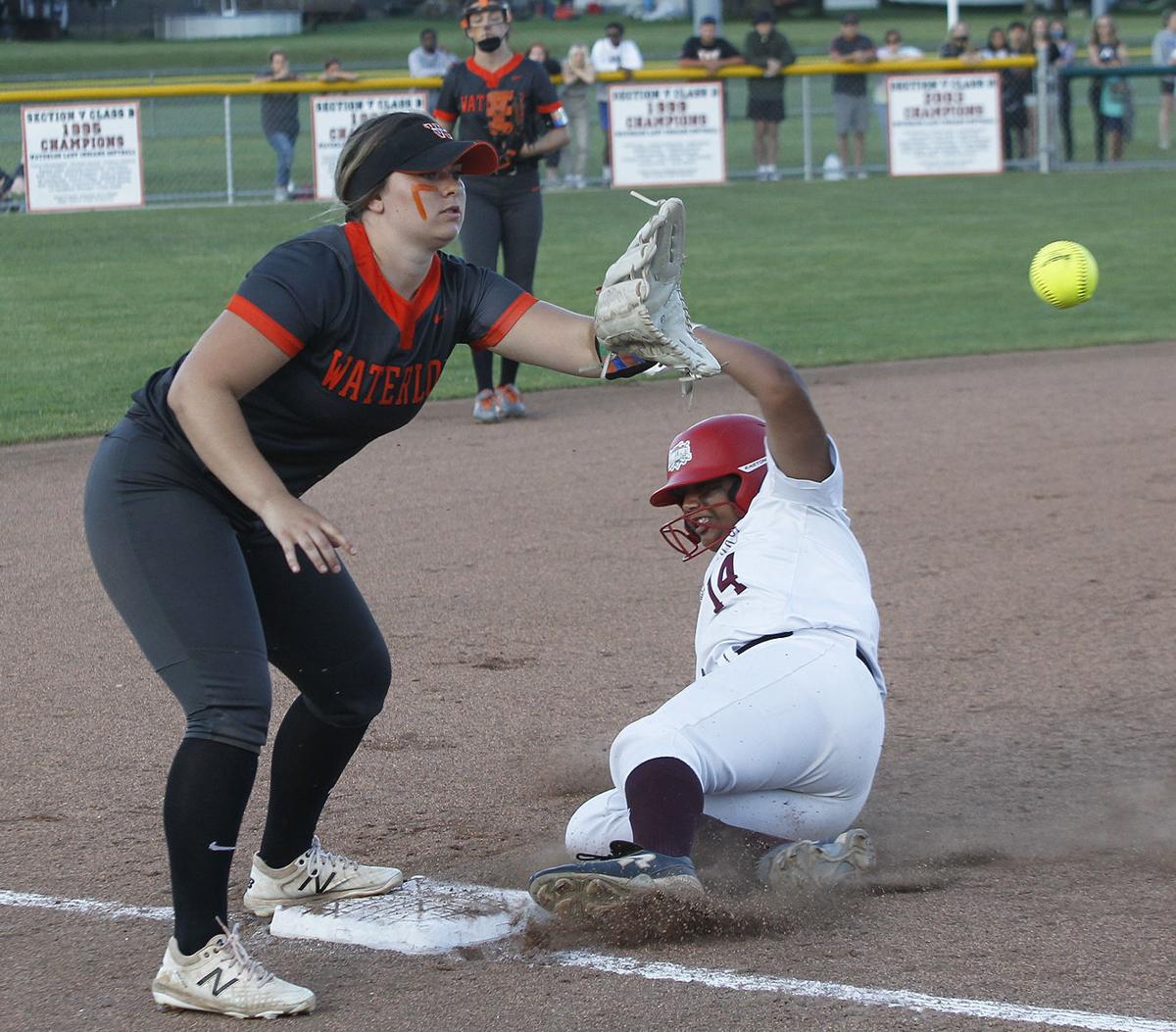 Newark senior Tia Brown slides into third base after belting a third-inning double that drove in a run. Brown went to third on the throw home. 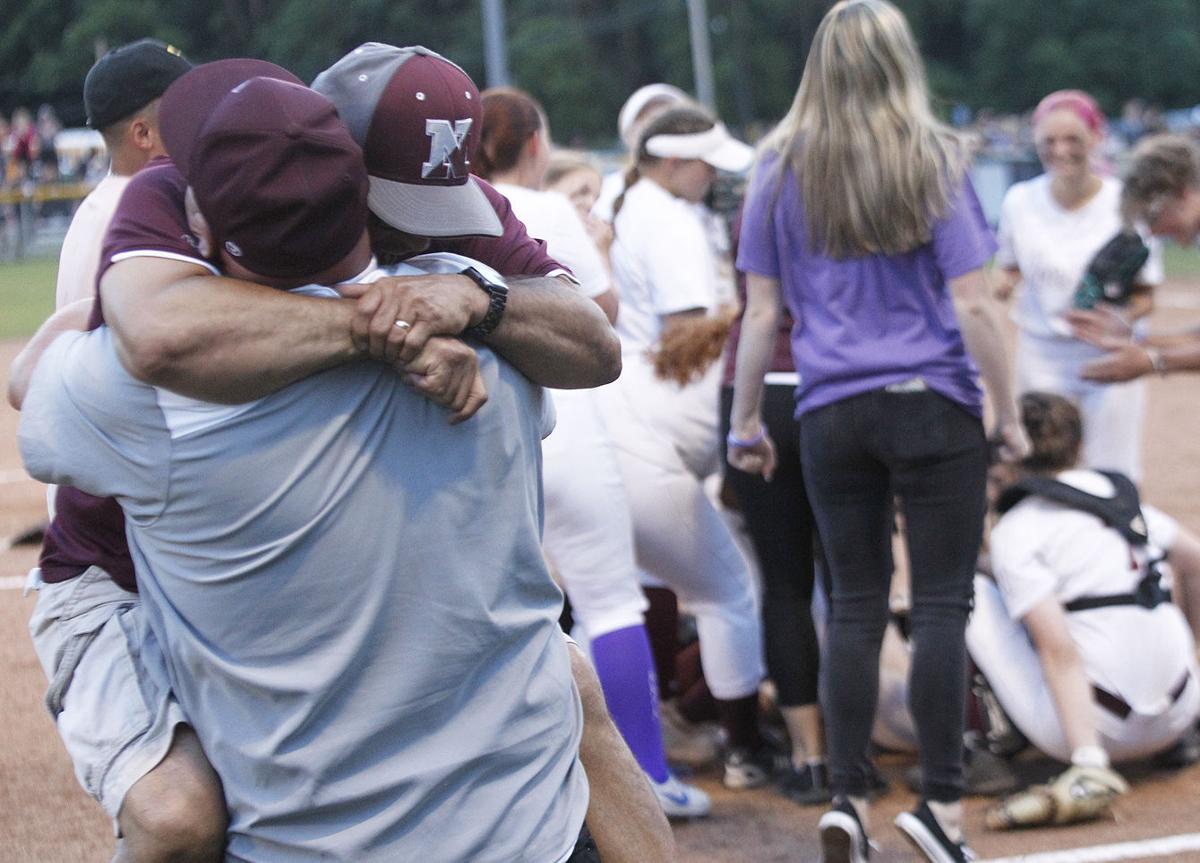 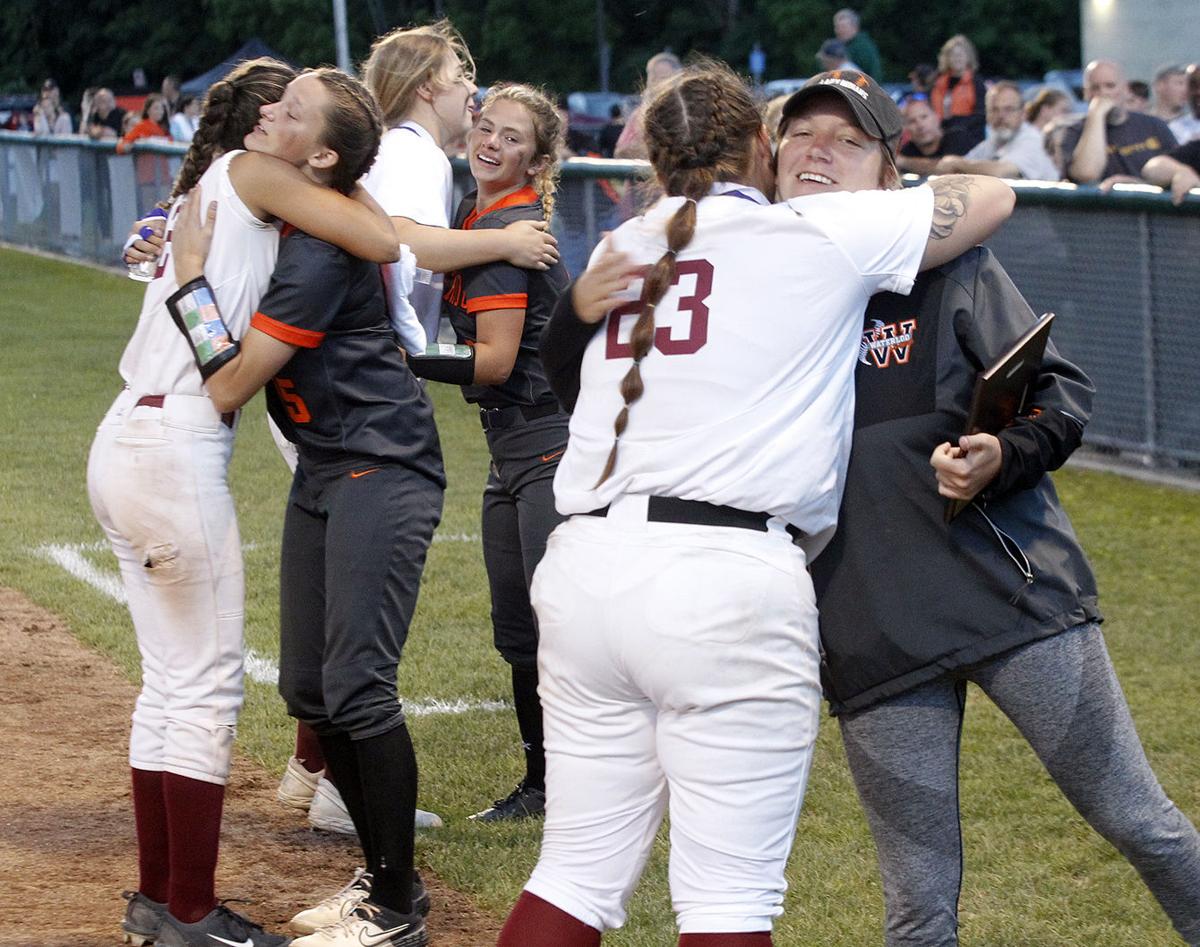 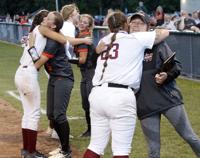 In a great sign of good sportsmanship, Newark softball players hug members of the Waterloo squad after the Reds won the Section V Class B1 title 3-2 Monday. Many of the players and coaches know each other from playing travel softball in the summer and fall.

Newark senior Tia Brown slides into third base after belting a third-inning double that drove in a run. Brown went to third on the throw home.

In a great sign of good sportsmanship, Newark softball players hug members of the Waterloo squad after the Reds won the Section V Class B1 title 3-2 Monday. Many of the players and coaches know each other from playing travel softball in the summer and fall.

WATERLOO — The much-anticipated meeting between No. 2-seeded Newark and top-seeded Waterloo in the Section V Class B1 championship game lived up to its billing.

The Reds prevented Waterloo from adding to its lengthy run.

In front of a packed crowd that circled the field, Newark edged Waterloo 3-2 to capture its second straight sectional title; after winning the Class B1 crown in 2019, COVID-19 wiped out the entire 2020 season.

“I’m super proud of these girls,” Newark head coach Jose Otero said. “A lot of things went on during the season (that were) COVID-related, some difficult times in the school district. That challenged them and they pulled it together. ...

“I’m really happy for our seniors. Three of them are back-to-back Class B1 champions. They can hang their hat on that and be proud of that. It gives the future of our program something to look forward to.”

“It’s always tough to take out your leader who’s done a great job for you,” Otero said about the decision to pitch Phillips over senior Tia Brown. “For the past four years, Tia has been our person. Strategically, Waterloo hadn’t seen Annabella and that played a whole lot into it, try to change things up, give them a different look. Defensively, we put in a strategy that worked well for the top of their lineup, taking the short game from them, being in position to make plays if they get it through our infield.

“We did a great job. I’m really proud of the girls.”

The Reds (14-6) scored their first run of the game before recording a hit. After reaching on a error, senior Maddie Brownell scored on classmate Haley Miller’s groundout to give Newark a 1-0 lead in the top of the second inning.

Brown roped an RBI double to the left-center field gap to give her Reds a 2-0 lead in the third. Newark tacked on one more in the frame to complete its scoring.

Waterloo (17-3), which had been averaging 12.5 runs a game, didn’t get anyone on base until the bottom of the fifth. Sophomore Brynn Rogers knocked a triple down the right-field line to lead off the inning. Sophomore Kennedy Beniamino grounded a ball to Phillips; Rogers scored the Tribe’s first run by racing home on the throw to first base. Senior Kylie Tavano then drilled a double to left-center field. She later came around to score with 2 outs after senior Natalie D’Eredita laced a ball past third base.

Phillips did not surrender anything else, recording two strikeouts and a popout in the bottom of the seventh to finish a game that took roughly 90 minutes to play.

“I’m so proud of the season that they’ve had, coming out, losing the first two games of the year and showing them that’s not the team that they were, coming out and winning 17 in a row,” Waterloo coach Kierystn Decory said about her group. “We were prepared today. We just weren’t hitting the ball like we normally do. Those days happen.

“It’s always a tough matchup with Newark; it’s always going to be a game like this against Newark. They played well. Annabella pitched an amazing game. She stopped us for sure.”

While Monday was a sour note to end its season, the Waterloo program is returning plenty of talent from this year’s roster — and there is more coming from the lower levels.

“We have a lot of talent coming up, and we have a bright, bright future here at Waterloo,” Decory said. “I’m really excited because next year we can be just as good as we were this year.”