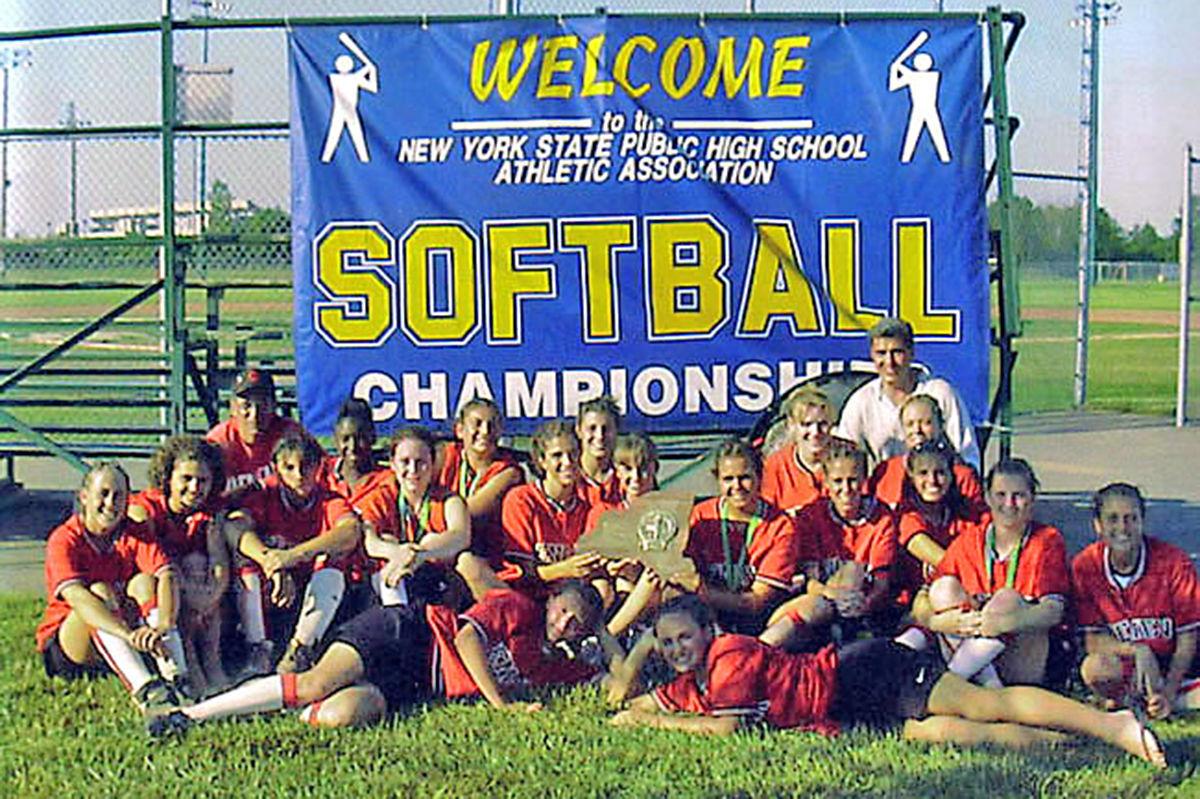 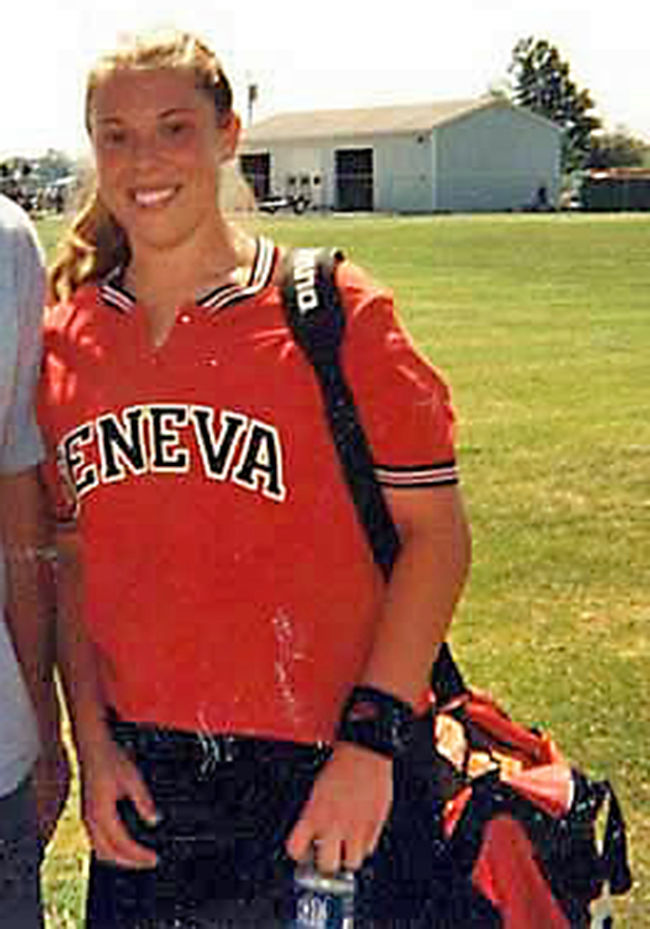 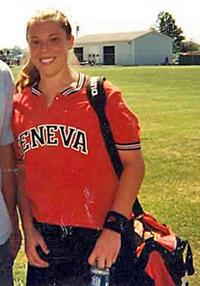 Sarah (Sterman) Ansell posted a 74-10 record during her varsity pitching career at Geneva.

Sarah (Sterman) Ansell posted a 74-10 record during her varsity pitching career at Geneva.

Randy Grenier has coached several sports in the Geneva City School District, most notably football. However, his time in charge of the Panthers’ varsity softball program was marked by a trailblazing piece of school history.

The 61-year-old oversaw Geneva softball for 12 seasons, coaching multiple league champions. Thinking back to the final year of the 20th Century, though, Grenier remembers feeling a little different about that particular group.

“I saw the potential there for our girls,” he said.

The 1999 Panthers dominated on the diamond, putting together an 18-game winning streak to conclude a 24-2 campaign. It ended with Geneva winning the school’s first state title in a team sport.

“This was a perfect example what a community effort really does,” Grenier said while reflecting back on the thrill of the bus ride home after the championship game, a 4-2 victory over South Glens Falls. “We had a tremendous Little League program. We had such a large base of players that were well-coached in their early years. Myself and my assistant coach, Pat Luzzi, were able to benefit from that and bring them along at a different level as far as being a high school team.

“That was a community effort. It’s the way things are supposed to happen.”

Sarah (Sterman) Ansell, 38, played competitive softball for 15 years. She piled up more than 150 victories in the high school and college game. Individual accomplishments aside, there is no doubt where the ’99 season falls on her list of career highlights.

1999 was Sterman’s junior season with the Panthers. Halfway through her eighth-grade year, she got called up to the varsity. By the time she finished high school she had logged a 74-10 record with an 0.52 earned-run average. Sterman struck out 890 batters and walked a mere 49. She pitched 23 no-hitters and nine perfect games, including two in a row at one point.

“Just an amazing young lady talent wise, as a student and as a person,” Grenier said about his pitcher. “She had a tremendous career. I coached a lot of sports, and you always have some kids that you look back on as far as ones that stick out as being the hardest workers ... she was one of those individuals that worked for everything she achieved, not only on the field but in the classroom.

“She was (the Class of 2000) valedictorian. We had some outstanding student-athletes (on that team),” Grenier added, pointing out that another player, Liz Breese, was at the top of her class.

“You’re not letting people off the hook for not trying hard at practice,” Sterman said about one of the things Grenier preached that stuck with her. “We went into that season with this expectation that everyone was going to pull their weight and do the work. If we did that, which we obviously did, we’ll get the result that we were working for. That’s what, even to this day, I still take from (Coach Grenier).”

“We had a very diverse group of personalities, I can’t even tell you,” added Sterman, noting that she visited the Geneva Sports Hall of Fame website before being interviewed to rekindle some of those ’99 memories. “From study habits to school culture and everything in between, we were so different. When it came to playing the game, all the differences were put aside. We truly did play as a unit that season.”

The Panthers won the Finger Lakes East League title. They captured the Churchville-Chili tournament to highlight there non-league achievements. A 17-2 regular season laid the groundwork for an unforgettable postseason push.

In the first round of the Section V Class BB tournament, Geneva blanked Pittsford Mendon 7-0, one of Sterman’s five postseason shutouts that year. The Panthers beat Aquinas, 1-0, in the sectional semifinals, then squeaked past Our Lady of Mercy 2-1 in the title game.

Sterman, who tossed every inning of Geneva’s postseason, then pitched the Panthers past rival Waterloo 5-0 in the state tournament play-in contest.

The state tournament was not a breeze, although the way Sterman dominated it may have seemed that way. Geneva started with a 1-0 victory over Maryvale in the quarterfinals, then edged Pearl River by the same score in the semis. South Glen Falls managed to touch Sterman for a pair of runs in the championship game, but the Panthers had no trouble producing enough offense to finish the job.

“I actually remember all the fans that came out from Geneva,” Sterman said about her memories of the title game. “They had some fan buses to bring some people from Geneva to support us. It meant so much to me.

“There were kids from high school coming out that didn’t really even have an interest in softball, and they weren’t necessarily close friends to anyone on the team. It was just this whole community support. I remember that as much as any actual pitch I threw or run we scored.”

Sterman even recalled looking out from the pitching circle to see some male fans taking their shirts off and showed off “GHS” painted on their chests.

“I remember the run that we had,” Grenier relayed. “We couldn’t lose a game. You lose, you’re done. We wound up winning the league championship and getting to sectionals. Winning the sectionals. We played a real tough opponent in Waterloo to be the ‘B’ representative to go to the state tournament. We were able to beat Waterloo.

“It was just a heck of a run. We were certainly underdogs with some of the teams that were there. Coach Luzzi and myself, we sat them down and said, ‘Hey, you know what? We’re here. Let’s enjoy it, but why not win this whole thing?’ The girls just went out and played some outstanding softball.”

Sterman and the Panthers repeated as Class BB sectional champions in 2000 by defeating Newark 4-0 in the finals; the hard-throwing righty was the Class BB MVP in both seasons. They returned to the state tournament with a 3-2 victory over Livonia in the play-in game, but saw their bid for a second consecutive state title end with a 3-2 loss to Williamsville South in the regional round of states.

Sterman, who now lives in Scottdale, Pa., took her talents to Cornell, and she credits a conversation she had with Luzzi during the ’99 campaign, following the first of Geneva’s two losses, as impacting her future in the sport.

“I remember asking (Luzzi), ‘You think we’re going to be OK? You think we’re going to come out of this and get back to winning?’ ... And we actually won the state championship,” she said. “His message at that time was not to just focus on one loss, and it’s kind of the same in the bigger picture. One game comes and goes, and its success or failure doesn’t really matter as long as you move forward and learn from it and focus on the next goal, the next dream. That’s what I really took into college.”

Sterman was a three-time All-Ivy League selection and a Louisville Slugger-TPS All-American. She set four school records, ending her career with a 79-29 record and 1.55 earned-run average.

She was inducted into the Cornell University Athletic Hall of Fame in 2016.

Nothing trumps that ’99 season, though.

“I do remember all the bus rides. Once you started the state tournament, nothing was close to home. We always rode the bus as a team to wherever the tournament was — and it was school bus by the way,” Sterman said with a laugh. “I actually remember our bus driver was Judy. I remember she was so pumped. She wanted to be the school bus driver for every game.

“I think my favorite specific memory would be riding on that bus to the state tournament. We had all the windows down. We had the music cranked. There were girls french-braiding other girls’ hair. We were putting on the eye-black. We were just getting pumped to play in that tournament on that hot, loud, windy bus ... I still remember that.”

Grenier knew for sure 1999 was going to be different after the Panthers won sectionals.

“We were kind of like the Buffalo Bills there for a bit. We had been to the (sectional) finals and lost five of them,” he said. “We were finally able to get that monkey off our backs and win the sectionals, and that kind propelled us on a nice run.”