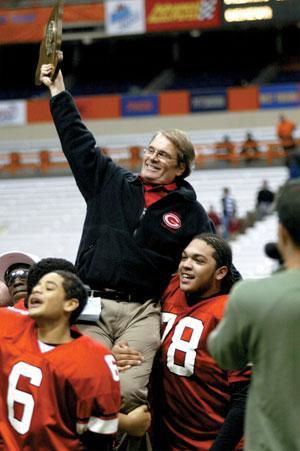 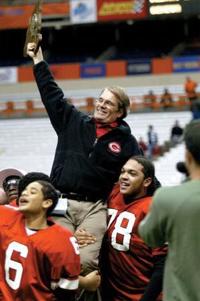 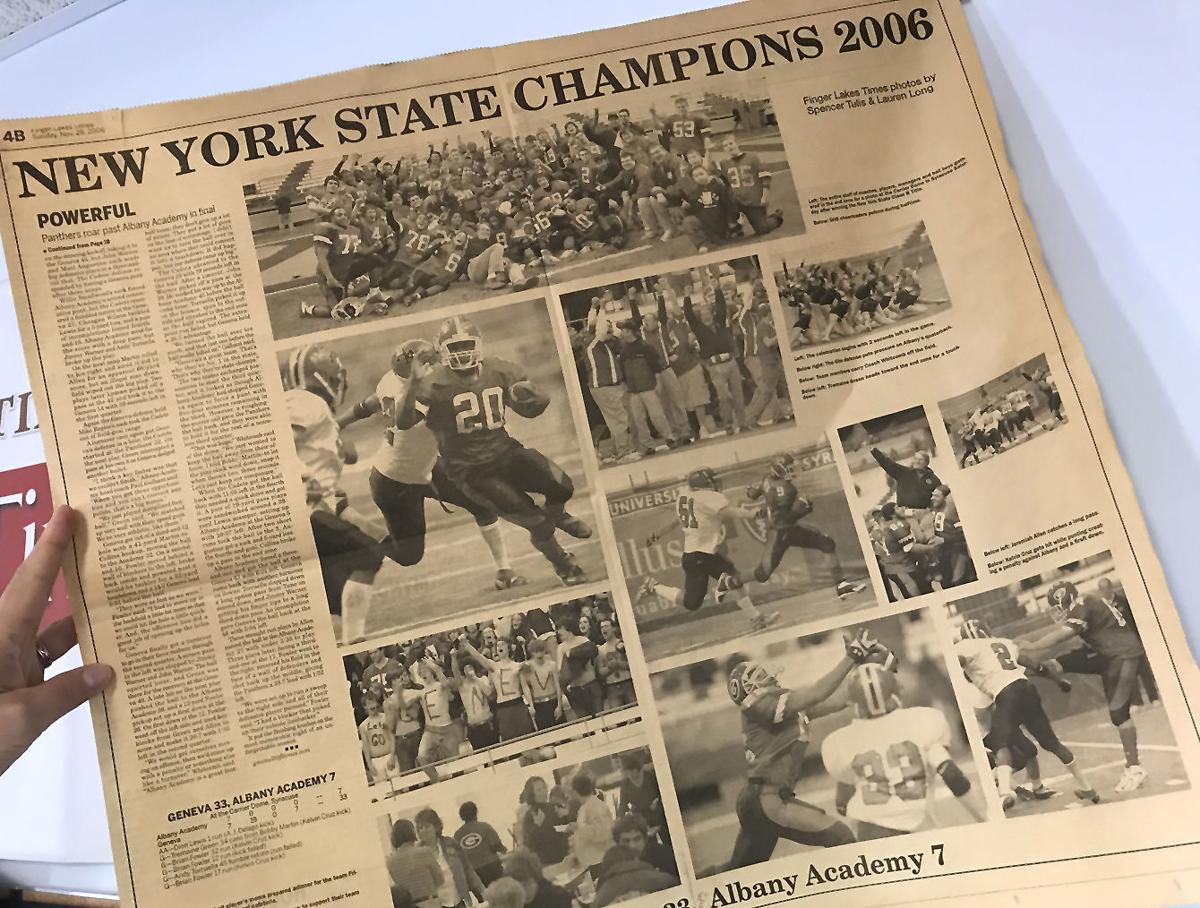 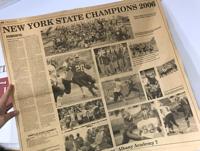 A page of photos, the rest of the front-page story, and the box score from Geneva’s victory over Albany Academy for Boys in the Class B state championship game of 2006. 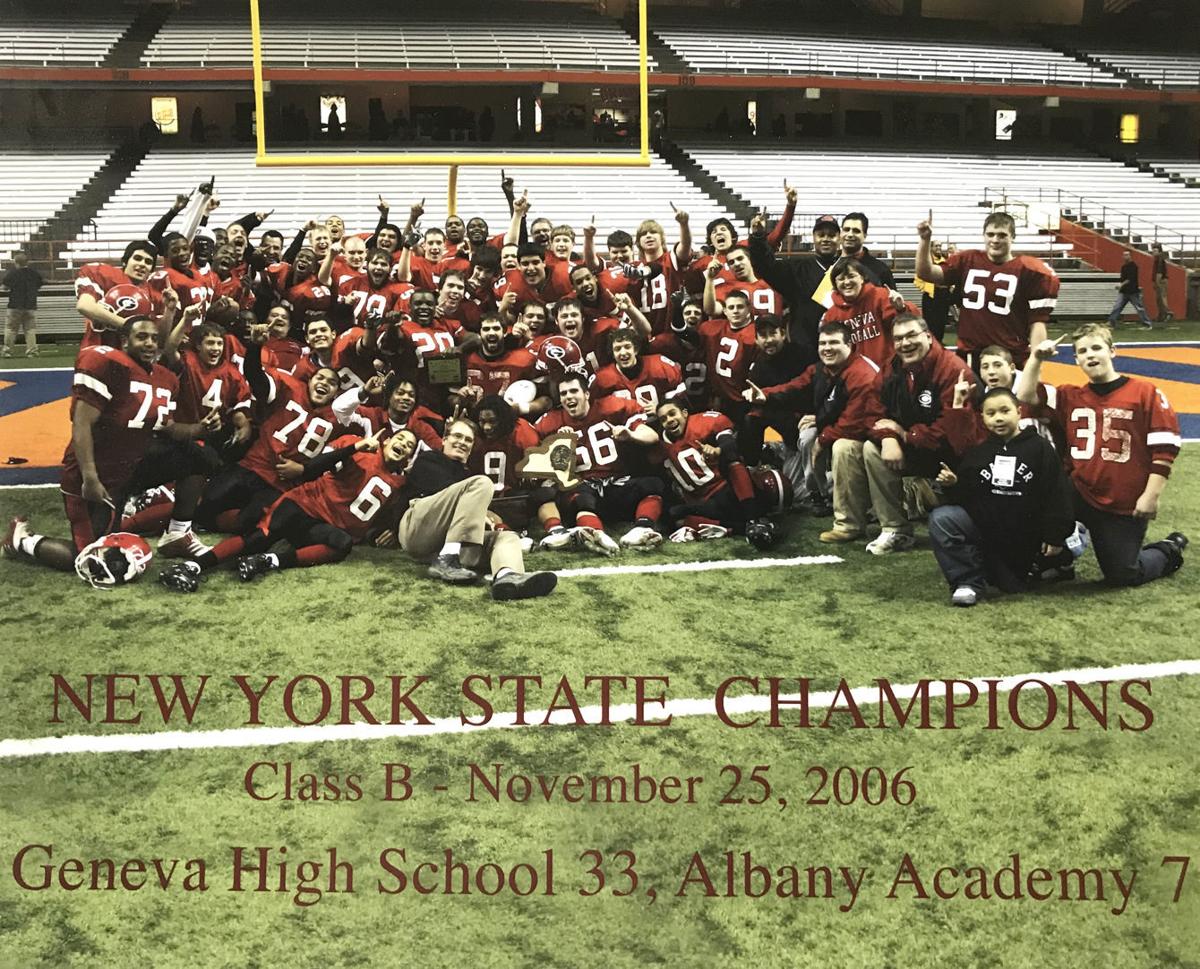 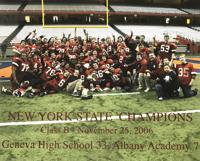 The team photo taken after Geneva won the Class B state title at the Carrier Dome in 2006.

A page of photos, the rest of the front-page story, and the box score from Geneva’s victory over Albany Academy for Boys in the Class B state championship game of 2006.

The team photo taken after Geneva won the Class B state title at the Carrier Dome in 2006.

GENEVA — The groundwork had been laid in the seasons leading up to 2006. That year, which ended with the Geneva Panthers winning the Class B state football championship, proved to be the culmination of a lengthy process. While the final scores in the Panthers’ run through the ’06 postseason, starting in sectionals and ending in the final round of states, seemed to indicate a breeze, the ultimate success did not come without a couple bumps along the way.

While a chance to play in Syracuse’s Carrier Dome and hoist a championship trophy is the goal of every high school football team in New York state, Dave Whitcomb knew when he accepted the Panthers’ head coaching job in 1998 it would not happen overnight. He inherited a program that did not win a game the prior season, had posted one winning record in the previous 12 campaigns, and had reached the championship round of the Section V tournament only once.

“I knew it was a challenge. I knew that Geneva had not had a lot of success,” Whitcomb remembered. “It was a combination being the athletic director at that point and coach. Some schools don’t allow that, and it was a challenge. I was familiar with the Finger Lakes league and thought, ‘Let’s give this a try.’”

Whitcomb was acquainted with Geneva well, actually, having coached 12 seasons at nearby Midlakes before moving a few miles to the southeast. He had talked with enough people to see the program’s potential.

However, his first few seasons at Geneva were difficult. The Panthers enjoyed one winning season in Whitcomb’s first five years.

By 2005, the only coach to guide three schools to Section V football championships had built a team that was ready to take the next step.

Jeff McNamara was the starting quarterback for the ’05 Panthers. Running back and fellow junior Brian Fowler was coming into his own that season. A dominant offensive line made the Panthers’ multi-pronged offensive firepower tough to slow down.

A year after losing in the sectional finals, the Panthers broke through for a Class A title, the school’s first in football. They made it all the way to the Carrier Dome before falling 35-14 to Amsterdam in the state finals.

As disappointing as that outcome was, Geneva was returning so many players in 2006 — and dropping from Class A to B — that expectations were sky high.

Sophomore Bobby Martin was the next quarterback in line, but the fleet-footed signal-caller had not completed an entire season of football before 2006.

“I had an extreme amount of confidence in Bobby (Martin),” Whitcomb recalled. “Bobby had been in the program for years. In other words, he was a kid that came up ... he was our ball boy at one point. He was so active during practice. He was always around, was always throwing a ball. I knew what his physical skills were, and I also knew his familiarity with the program.”

Martin, whose father Pat was one of Whitcomb’s assistant coaches, made the change at quarterback seemingly an afterthought as the Panthers roared to a 3-0 start.

“I told people when Bobby had become the quarterback, and they were all concerned about it,” Whitcomb said. “I told them, ‘I’m not worried about it. Bobby is going to be just fine.’”

Geneva’s road back to Syracuse hit some turbulence in the fourth game of the season when Victor eked out a 16-14 win. Then, later in the regular season, a controversial call did not go the Panthers’ way in a 30-26 setback to McNamara and the Braves in what many say was the game of the decade.

While there would be no Finger Lakes East title, Geneva’s sights were focused on bigger things.

The Panthers were the No. 3 seed in the Class B sectional tournament. Fowler got the offense started quickly against sixth-seeded Palmyra-Macedon in the opening round, ripping off a 66-yard rushing touchdown.

“Brian was one of the most dedicated, hard-working athletes,” Whitcomb praised. “He possessed a great combination of physical skills. He was big. He was strong. He had speed, power and great vision on the field.

“But, his work ethic off the field was incredible. He worked as hard as anyone I’d ever seen, and he was a very quiet, humble kid, very, very respectful, just a terrific human being. He was kind of the whole package.”

Whitcomb is not the least bit surprised Fowler wound up pursuing a medical degree and becoming a doctor.

“He just has that kind of work ethic,” the coach said.

The sectional semifinal against seventh-seed East Rochester/Gananda was scoreless after one quarter. However, Martin and Fowler starred in the second quarter as the Panthers zipped to a 26-7 lead by halftime. Fowler finished with four rushing touchdowns, including an 80-yard burst in the second half to punctuate a 46-14 triumph.

Fowler wound up with a remarkable 12 total touchdowns in three sectional contests, the last a 33-14 win over top-seeded Hornell in the Class B final. Jeremiah Allen’s 77-yard romp capped the championship scoring.

Geneva did not trail during sectionals.

The running game continued to produce in a state quarterfinal game against Lackawanna. Martin, Fowler and Allen combined to run for all five of their team’s scores in a 32-8 win.

Geneva’s state semifinal opponent, Chenango Forks, proved to be its toughest obstacle. The Panthers needed some late-game heroics to get the win, 26-21.

While the title game against Albany Academy ended up being one-sided, the Panthers faced a 7-0 deficit early against a team that featured longtime NFL player Dion Lewis in the backfield.

Martin connected with Tremaine Green on a 34-yard touchdown to knot the score at 7 after the first quarter of play. Green had proven to be a reliable target, and a boost for Martin’s confidence, throughout the season.

Fowler wound up being selected as New York State Class B Player of the Year in 2006. He was a two-time Section V tournament MVP, and the Panthers’ MVP selection in each of their state finals appearances.

“I don’t have one particular favorite memory,” Whitcomb said about the postseason run. “Obviously, the championship game. The thrilling game in the semifinals against Chenango Forks, where we won the game late.

“I think my single-most favorite memory is being around that group of young men. I just truly enjoyed every minute of it, just being around those kids and the coaches. And, I had some great assistant coaches.”

Hundreds of fans greeted the team upon its return to Geneva, and the players were ushered into the city by way of a parade.

Mike Nozzolio, a Fayette resident who represented the 54th state Senate District for 24 years until he retired in 2016, honored the Panthers at the Capitol Building in Albany.

“That was a special group of kids,” Whitcomb concluded.