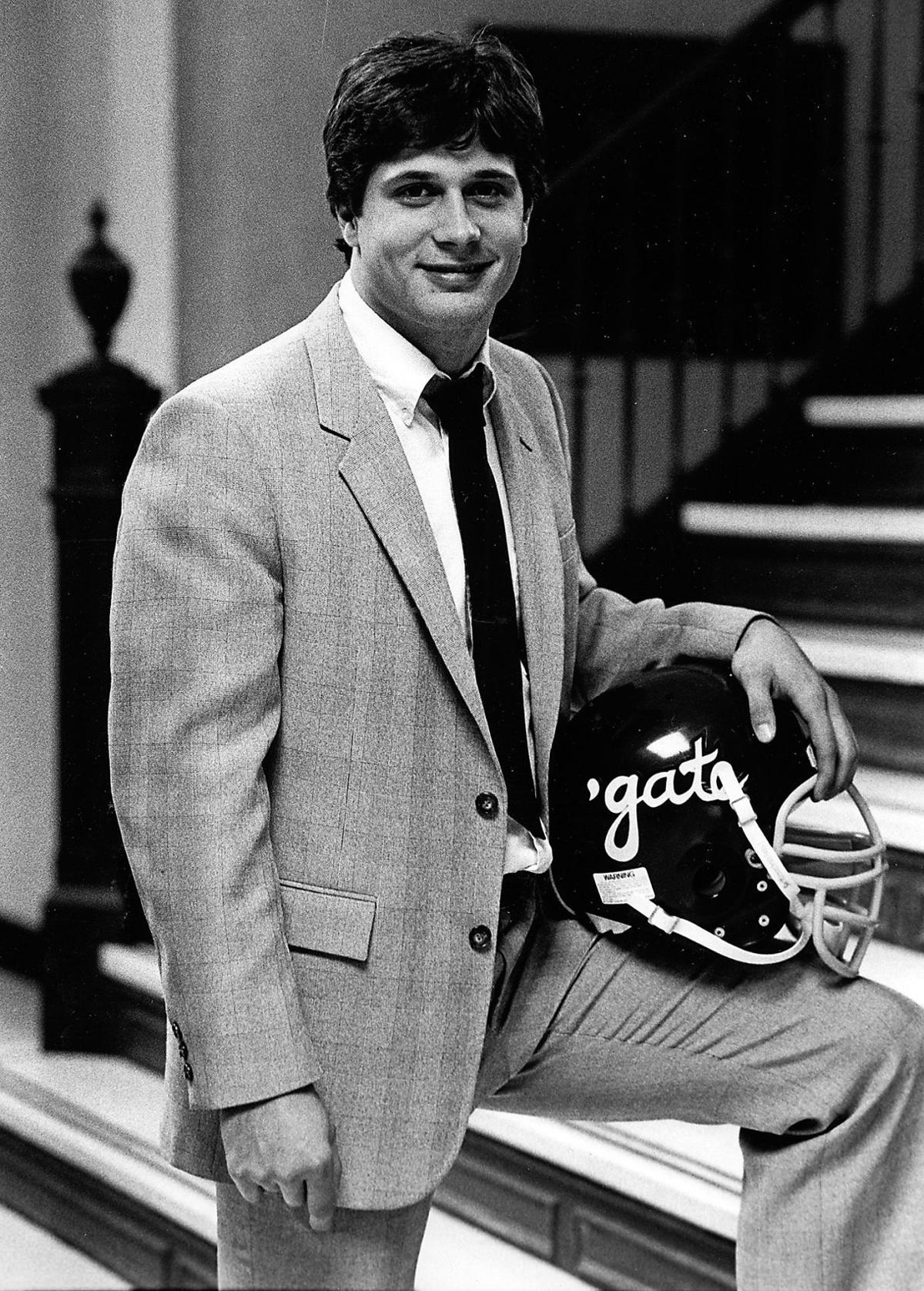 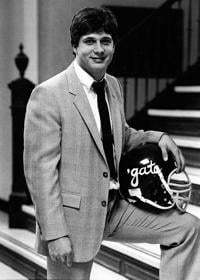 Newark native Tom Burgess is shown before his senior season at Colgate University in 1985. He set 14 school records in his one campaign as a starter for the Red Raiders and then went on to a successful pro career in the Canadian Football League. 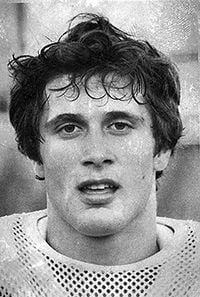 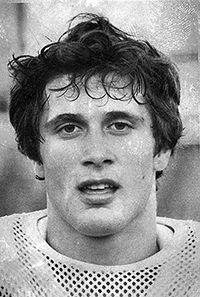 It’s human nature for a person who grows up playing sports to dream of a professional career. For so many, that rarely comes to fruition. However, for a select few, the dream of fulfilling that aspiration is so strong any obstacles only strengthen the drive and determination.

From the age of 9, Newark native Tom Burgess knew he wanted to play pro football, whether it be in the National Football League or somewhere else — and, starting in 1986, it was his occupation for 10 years.

Dreams aside, football was not the only sport he embraced.

“I was your typical football, basketball, baseball (athlete),” Burgess said.

By the time he reached high school, it was clear the gridiron was where we would be remembered.

His journey started in Newark under the late Lenny “Rocky” Colavito, the Reds’ legendary coach. A football coach’s dream is to have a talented quarterback to run the offense, and while Burgess was certainly capable behind center, it was his play in the defensive backfield that attracted Division I schools such as Syracuse and Colgate.

“My natural position was quarterback, but I also played free safety,” said Burgess, who now lives in Phelps. “The interesting thing about that was I got more accolades at free safety — All Greater Rochester, for example, and second-team All-State — and at best I was honorable mention at quarterback.”

Playing on both sides of the ball helped Burgess become a top-tier athlete. Not only could he sling the pigskin accurately, he could outrun almost any defender. Burgess’ speed gave Colavito the opportunity to use an offense designed around the veer option, which is also referred to as the triple option.

The veer is designed as a three-back attack. One back dives into the line, one sprints wide to be ready for a pitch, and one becomes a lead blocker on the perimeter of the offensive formation. The quarterback then has the option to read the defense and hand the ball off, run it himself, or throw it.

With Burgess at center, Colavito instituted the offense that allowed Burgess to flourish — and may have defined his entire career.

“(Colavito) came to Newark in the mid-70s, and his first quarterback of his first team at Newark was my brother,” Burgess said about his older sibling, Chris. “I had another older brother after Chris that also played quarterback for Lenny.”

Not surprisingly, when Tom arrived on the varsity he fit into Colavito’s system like a glove. Colavito wound up coaching all five Burgess brothers: Chris, Jay, Fred, Joe and Tom.

“By the time I got into high school, it was an easy relationship to have,” Burgess said. “The one thing I say about Rocky is, when I got there, the offense was the veer option. He tailored the offense to my skill set, so we started doing a lot more sprint-draw, sprint-out-type offense, as well as dropbacks and play-action.

“The interesting thing to me, and a credit to (Colavito), is from that point on that was what I did. At Colgate, we had that same offense, very similar, and when I went to Canada the offenses I played under were pretty much the same … I’ll give Rocky a nod that he developed a system that worked well for me.”

Despite being a dual-threat quarterback, Colgate and other schools recruited Burgess as a free safety. In addition to his AGR and All-State honors, he was named a first-team all-conference defensive back in consecutive years.

“When I first was being recruited for Colgate, the gentlemen that had the region (to scout) was a defensive backfield coach,” Burgess remembered. “My decision to go there (Colgate) was more about trying to get to the best football program … It turned out that my gut instinct was somewhat right, because as more and more film came through, they did switch me over to quarterback.”

While holding out hope for later in the season, Packers rule out having fans at first 2 Lambeau Field games

Packers' Corey Linsley not fazed by uncertainty of 2020 season, own contract year

As a quarterback in his senior year at Newark, Burgess completed 70 of 149 passes for 947 yards and 9 touchdowns. He ran the option and gained 251 yards rushing on 75 carries with 3 TDs. He was the unanimous first-team selection at quarterback in the Finger Lakes East.

Burgess graduated from Newark in 1982 and headed for Colgate, an NCAA Division I-AA program (that level is now known as the Football Championship Subdivision, or FCS). Red Raiders coaches saw his potential under center and slotted him in at quarterback, where he learned and played behind standout Steve Calabria.

After setting 43 school records in four years as a starter, Calabria was drafted by the Tampa Bay Buccaneers. Burgess stepped into the starting role as a senior after going 30-for-65 passing for 532 yards while spelling Calabria — and he produced his own record-setting campaign.

In 1985, Burgess set 14 school records in passing and total offense, overtaking some of his predecessor’s numbers in certain categories, including total yards in a season. Burgess averaged 266.1 yards of total offense per game, good for ninth in the nation. In addition to being named the team’s most valuable offensive player, he threw for a school-record 2,565 yards and gained a school-record 2,927 yards in total offense — much of it thanks to the veer offense he had seemingly perfected.

In his final game as a Red Raider, Burgess passed for 346 yards and three touchdowns against Boston University, the fourth-best single-game yardage effort in school history.

“All the focus was that I had one shot to have a great college football season, and that’s all I was thinking,” Burgess said about his senior season.

Burgess was inducted into the Colgate Athletic Hall of Fame in 2011.

“I can’t say (playing professional football) was at the front of my mind, that I would still get that shot. The reality of not playing until senior year at Colgate tabled such thinking,” Burgess said. “My recollection is that somewhere late in the (1985) season, the scout for the region for the Ottawa Rough Riders showed up at practice. ... The CFL was looking for those late-developing diamonds in the rough, and so I fit that mold. Ottawa had, at some point late in the fall, put me on their protection list.

“I ended up signing (with Ottawa) in March (of 1986), so not until late in my senior year at Colgate was the idea that the CFL would come calling enter my mind.”

Burgess won back-to-back Grey Cups, the first in 1989 with the Saskatchewan Roughriders as a backup to Kent Austin, and in 1990 as a starter for the Winnipeg Blue Bombers. Burgess was named the Most Valuable Player for the offense in 1990 after he led the Blue Bombers to a 50-11 victory over the Edmonton Eskimos, good for Winnipeg’s 10th Grey Cup.

CFL franchises tend not to stick with a quarterback for too long; as a result, Burgess bounced around five times in 10 years, playing for three different franchises. He began with Ottawa in 1986, moved on to Saskatchewan from ’87-89, then spent two seasons in Winnipeg and two more with Ottawa before finishing his career with in Saskatchewan in ’94-95.

He was inducted into Saskatchewan Roughrider Plaza of Honor in 2009.

Burgess wound up being one of those rare athletes to fulfill a dream of playing pro sports — and he left a lasting impression north of the border.

LEGAL NOTICE Crafting Past Midnight, LLC. filed with the SSNY