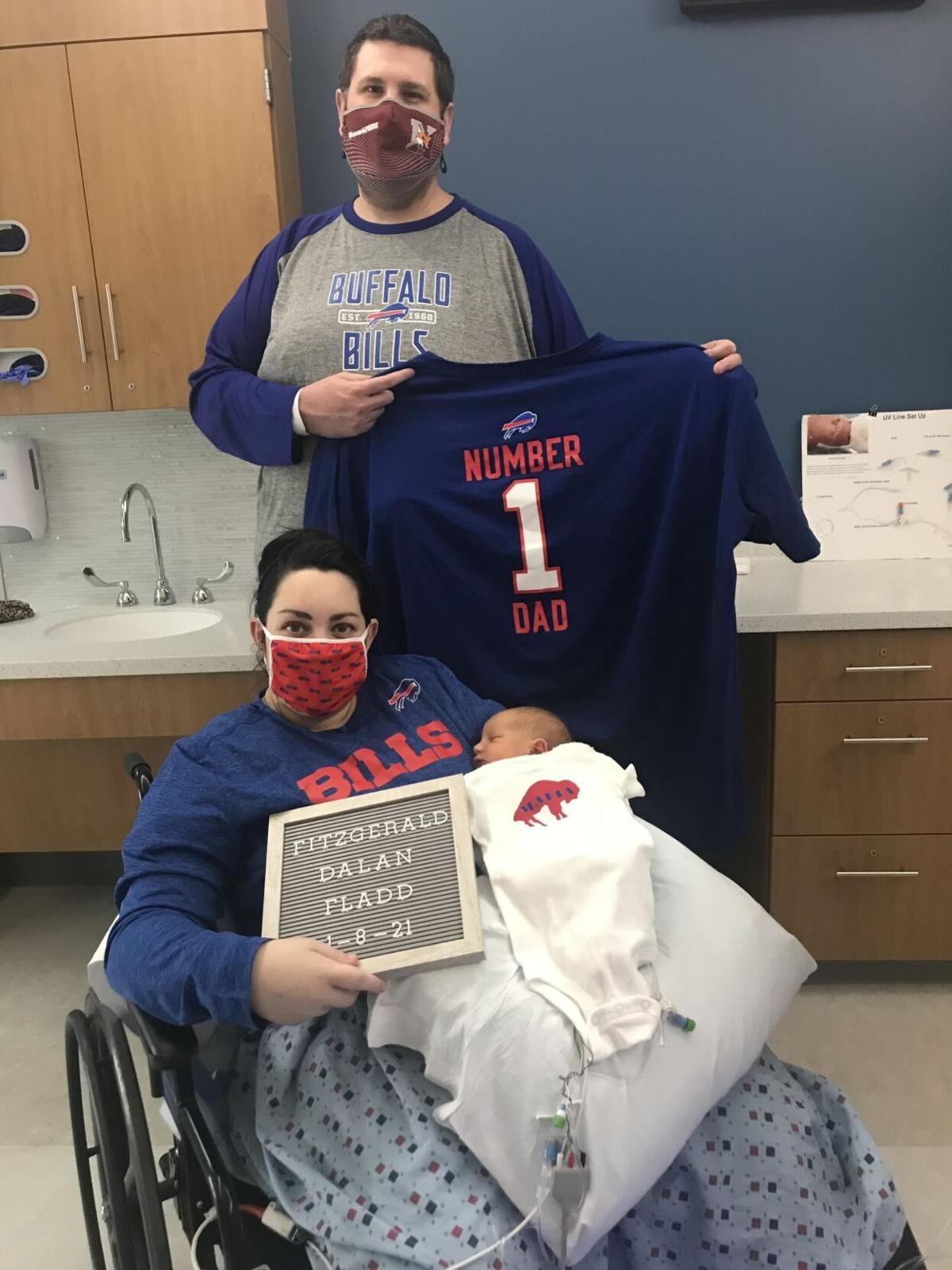 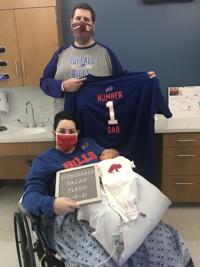 Justin Fladd with his wife Chelsea Fladd and their newborn son and newest member of Bills Mafia, Fitzgerald Dalan Fladd. 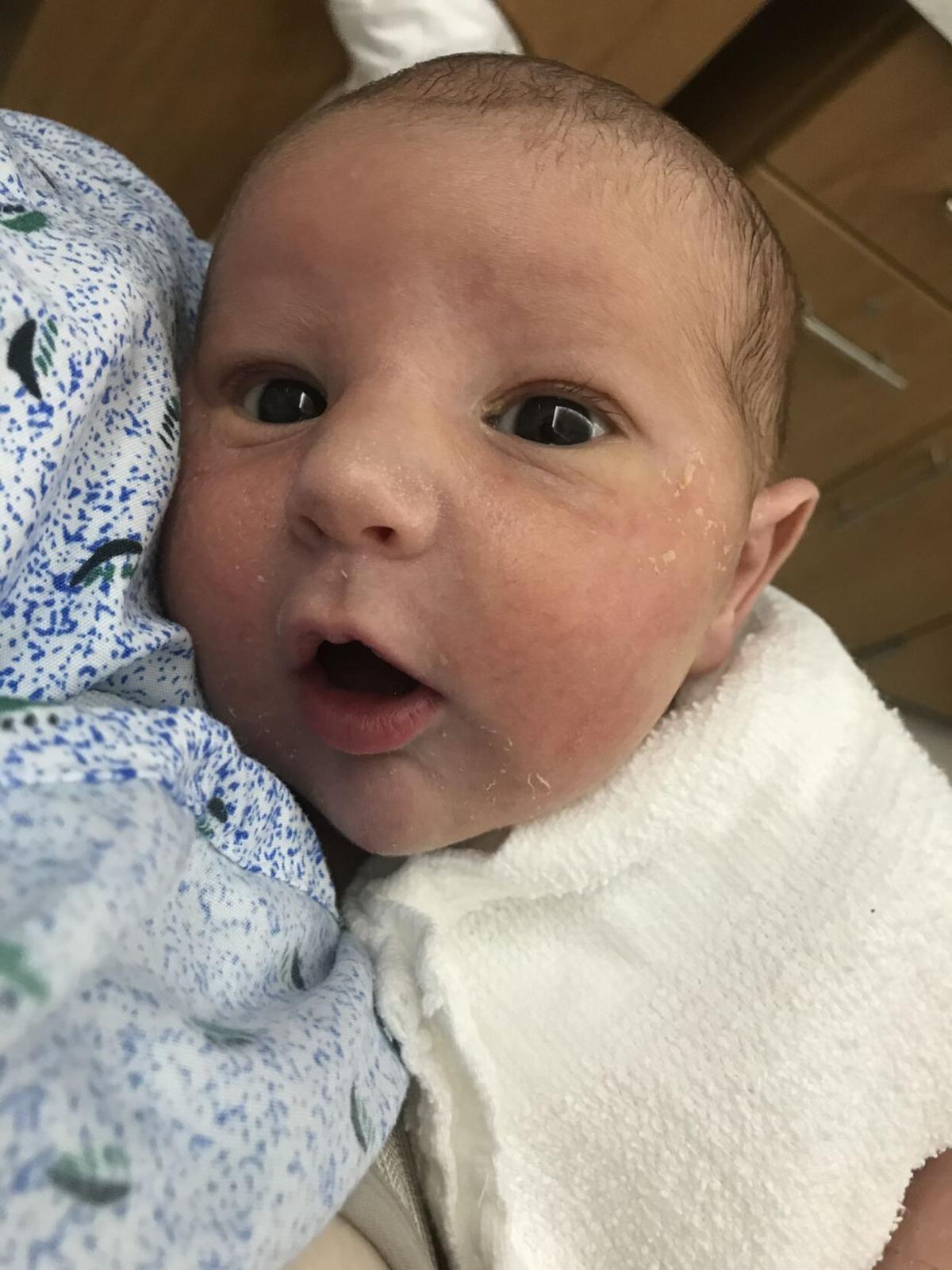 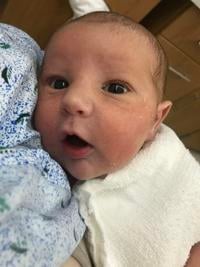 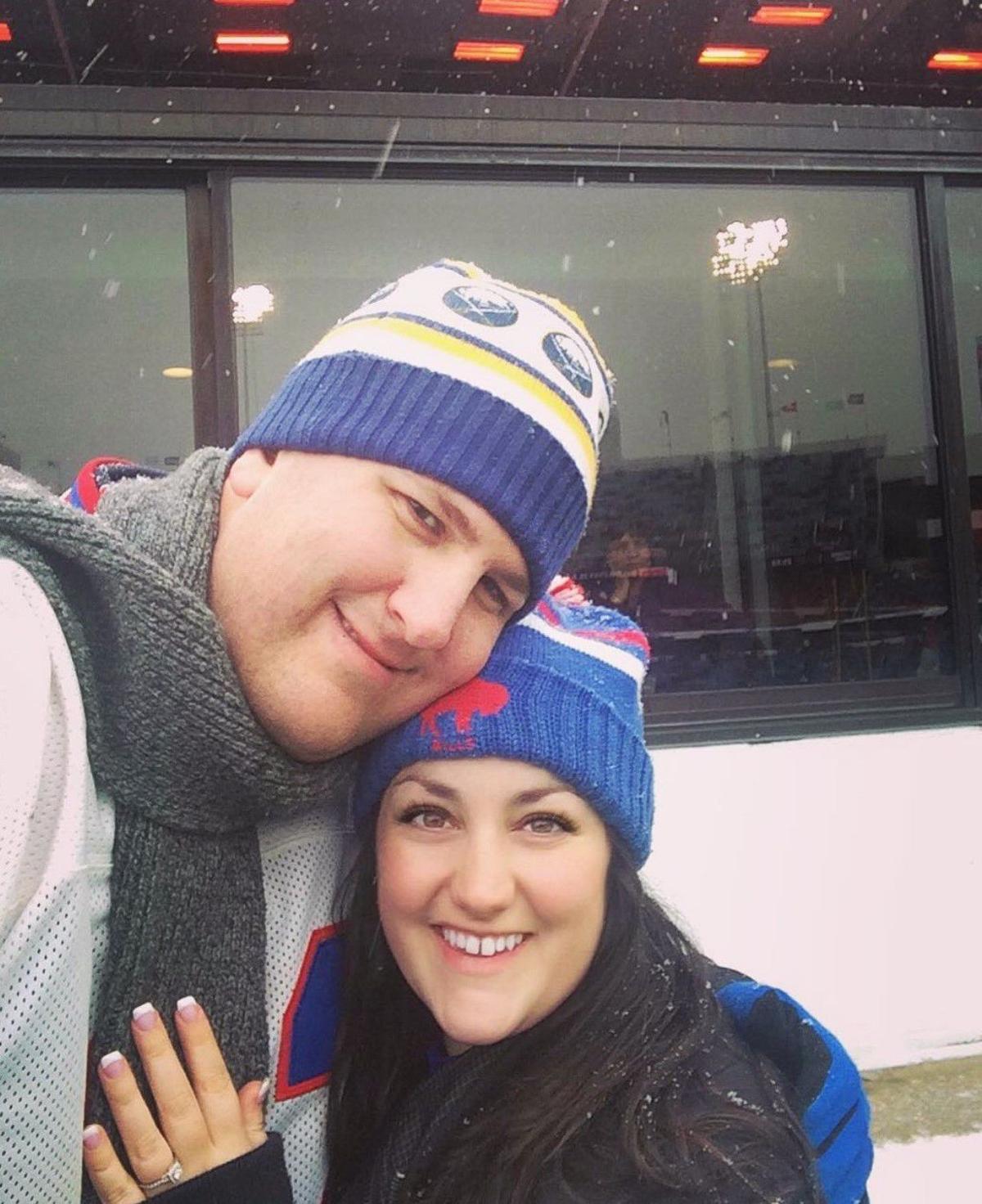 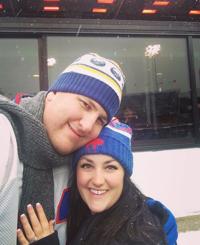 Justin Fladd with his wife Chelsea Fladd and their newborn son and newest member of Bills Mafia, Fitzgerald Dalan Fladd.

ROCHESTER — The Buffalo Bills won their first playoff game since 1995 on Saturday as they took down the Indianapolis Colts.

Newark girls basketball head coach Justin Fladd grew up about ten minutes away from Bills stadium, has been a die-hard Bills fan his entire life and has been a season ticket holder for 15 years.

On Saturday, it was the first time that fans were permitted to be in attendance at Bills Stadium since last season and Justin was lucky enough to be secure of those 6,778 tickets.

“I didn’t even think I had a shot at going because I didn’t think I had enough seniority,” Justin stated in a phone call to the Times.

But Justin got the tickets, tested negative for COVID-19 and proceeded to watch the historic win not from the seats, but from Rochester General Hospital.

The Bills weren’t the only life changing event going on in Fladd’s life last week. His wife, Chelsea Fladd, a Marcus Whitman grad and also a teacher at Newark, was due to have a baby boy on Jan. 4.

Though she was two days past due, Chelsea was not showing any signs of labor at the time and encouraged her husband, “If you have the chance to get tickets, you got to go buy them.”

“She is literally the best wife ever,” Justin said. He then got his mandated COVID test Wednesday, Jan. 6. Following a negative result, Justin picked up Chelsea for her OB appointment. All of the sudden, Chelsea’s blood pressure began to rise. Just like that, the newest Fladd was on its way. The two rushed to Rochester General immediately.

Fitzgerald “Fitzy” Dalan Fladd was born at 10:58 p.m. on Friday, Jan. 8th, 2021, under 12 hours before the Bills’ playoff game that Justin had secured the exclusive tickets to.

“Baby is good,” Justin stated on his newborn’s health. “Baby is healthy, we’re still currently at Rochester General. It’s been a long seven days on a four-foot couch for a guy who’s 6-foot-8; it’s pretty brutal.”

Chelsea was diagnosed with pre-eclampsia, which is a pregnancy complication that attacks the placenta and it either starts at the beginning of pregnancy or the at the end of pregnancy.

'Lot of moves to make' to get under salary cap in unique year, Packers GM Brian Gutekunst says

“Both are doing better,” Justin said of Fitzy and Chelsea. “It was scary couple of days. The staff at the three different departments we were in at Rochester General have been unbelievable.”

There was great chance that Chelsea and Fitzgerald would be discharged from Rochester General Wednesday night, according to Justin.

Justin was able to give his playoff ticket as a substitute to Matt Groot, who also teaches at Newark and is the head lacrosse coach. The two played basketball together at Nazareth and Groot was the best-man at Justin and Chelsea’s wedding.

Fladd did watch the game from Rochester General and he stated, “The only reason I would ever miss that game was for the birth of my child.”

Since the birth of “Fitzy,” the Fladd’s story has gone viral. Fladd has talk to Channel 7 Buffalo, Channel 13 Rochester, Rochester radio personality Brother Wease and was contacted by “The Drew Barrymore Show” out of Beverly Hills, Calif. The producer of the show stated that Barrymore loved their story.

John Ginter, who is the current principal at Lincoln Elementary School in Newark goes to the Bills games with Fladd as both are season ticket holders.

Fladd's season ticket holder rep did bump him up in line for the Ravens game this weekend because of his situation, but tickets sold out two hours before he could even sign up.

Nevertheless, the Fladds will for sure be rooting on the Bills once again this weekend as they look for their first trip to the AFC Championship since 1994.

Bills Mafia has grown by one.