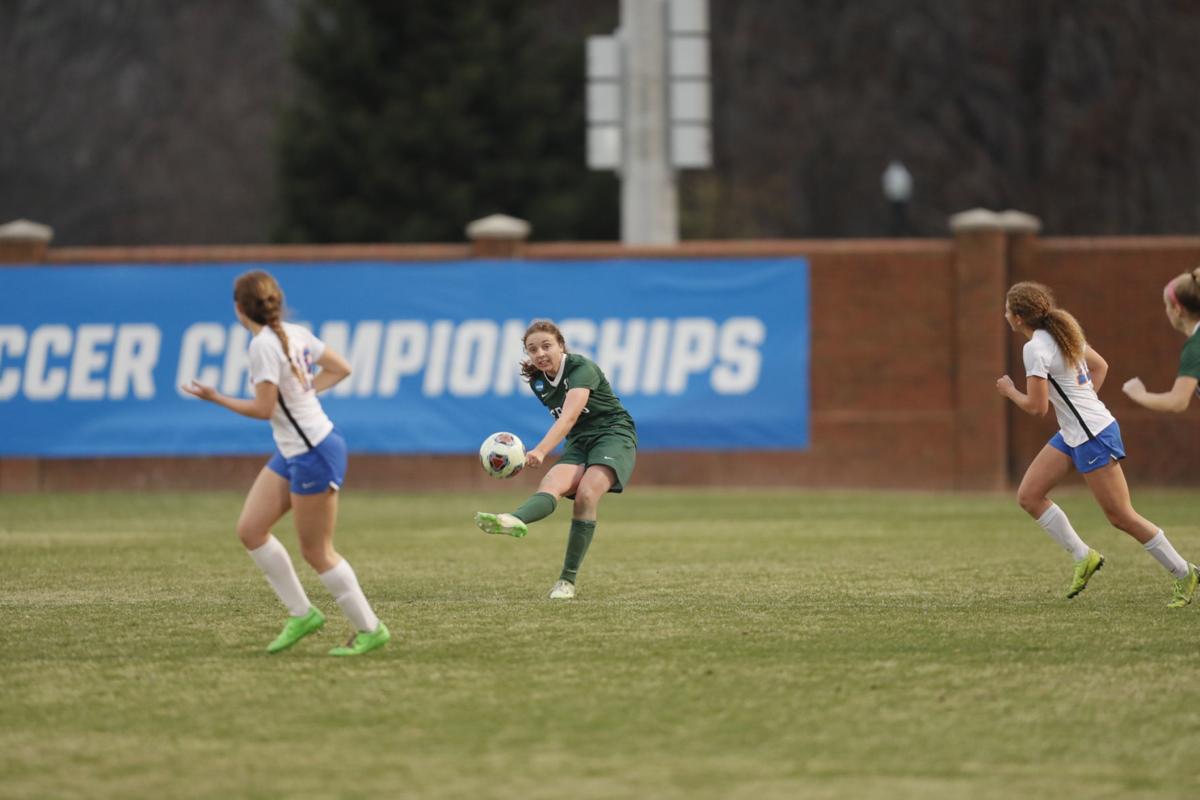 Bizzy Moore rifles a pass during an NCAA Division III semifinal against Pomona-Pitzer. The Herons won 2-0 and moved on to the national championship.

Bizzy Moore caught up with Pete Lambos in a recent video chat. Log on to fltimes.com to see the entire interview.

Bizzy Moore rifles a pass during an NCAA Division III semifinal against Pomona-Pitzer. The Herons won 2-0 and moved on to the national championship.

Bizzy Moore caught up with Pete Lambos in a recent video chat. Log on to fltimes.com to see the entire interview.

William Smith soccer player Elizabeth “Bizzy” Moore was looking forward to a less-hectic spring semester. In an interview with the Times last November, Moore revealed she already had secured a post-graduate position in the Digital Technology Leadership program at United Technologies Corp.

When the spring semester arrived, Moore’s final season of college soccer had ended, and all she had left to do was complete four courses and accept her diploma. She anticipated enjoying the spoils of her final semester after seven previous ones filled with exams and homework, along with three summers of grueling internships.

Then, the COVID-19 pandemic happened. All of a sudden, Moore found herself quarantined at home with five other family members — she had never spent more than 13 days in a row in her hometown of Williamsville throughout college.

Although her senior farewell was altered in a way she couldn’t have imagined, Moore’s hard work has not gone unrecognized.

During William Smith’s virtual Night of Champions ceremony, Moore was presented with the Winn-Seeley Award as the Herons’ most outstanding senior athlete. The award recognizes achievements in service, leadership, athletics and academics.

“I was just really grateful and honored,” Moore said in a recent video interview with the Times. “Ever since I became a Heron I have admired all the amazing William Smith athletes that have been selected for the Winn-Seeley Award before me. I’ve admired them for their athletic achievements, but, more importantly, who they were as leaders and people, so to join their legacy is something that I dreamed would happen.”

Moore certainly would have preferred to accept the award in person. However, the prestige it carries was not lost on her, no matter the circumstances.

“The William Smith athletic department did an amazing job at trying to make this as special as possible given the circumstances. It was still pretty special, but I have not heard about how I am actually going to receive the award ... I think they will mail it to me,” she said with a laugh.

When Moore last spoke with the Times, the Herons had steamrolled Mary Washington 2-0 in the second round of the Division III tournament. The Herons staged one of the program’s great comebacks in the third round, wiping out a two-goal deficit to stun Stevens 3-2. Then, they discarded Johns Hopkins and Pomona-Pitzer by scores of 2-0 before falling 1-0 to Messiah in the championship game.

Moore played in all 24 games last fall and notched four goals, including three game-winning tallies. She was named to the United Soccer Coaches All-East First Team.

“Bizzy epitomizes what that award represents,” Wilber said in a phone call. “Since her arrival at William Smith as a first-year, she has been so completely selfless and so wanting to support athletes in their endeavors. She got past herself really quickly.

“The thing about Bizzy is she is enormously grateful, enormously appreciative, and is so genuine about that. I think that is two of my most favorite qualities of Bizzy: just her sincerity and her (ability) to appreciate and be grateful. She has been a joy to coach because of those qualities, and I know she’ll be a joy to work with when she moves into her professional career.”

The current public health crisis has made Moore even more appreciative of her final season.

“I think this whole situation has really made (the other seniors and I) step back and be so thankful and grateful for the experience we were able to have,” Moore said. “There are so many student-athletes who didn’t have the opportunity to finish. ... It really does make us feel really thankful and lucky that we were able to finish because the lesson that this whole situation has taught everyone is to be grateful for what you have in the moment because it can be taken away at any second.”

When Moore graduates, whether virtually or in person, she will move on to her post-graduate career, albeit with a slight variation.

Moore said she will finish the semester and her undergraduate career with all she has to give. That seems more than enough. Just ask her teammates and coaches.