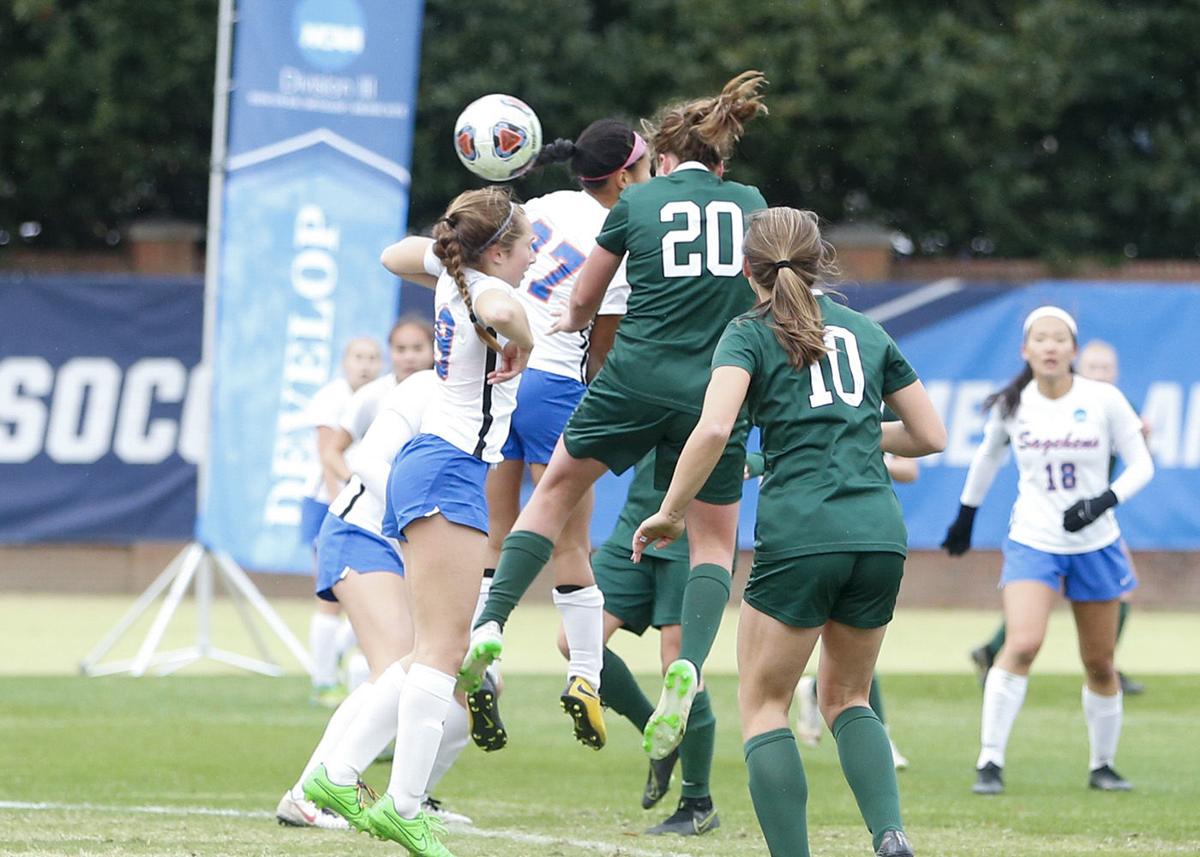 William Smith senior defender Bizzy Moore (20) heads a cross into the back of the net for the Herons’ second goal of Friday’s NCAA Division III semifinal game. 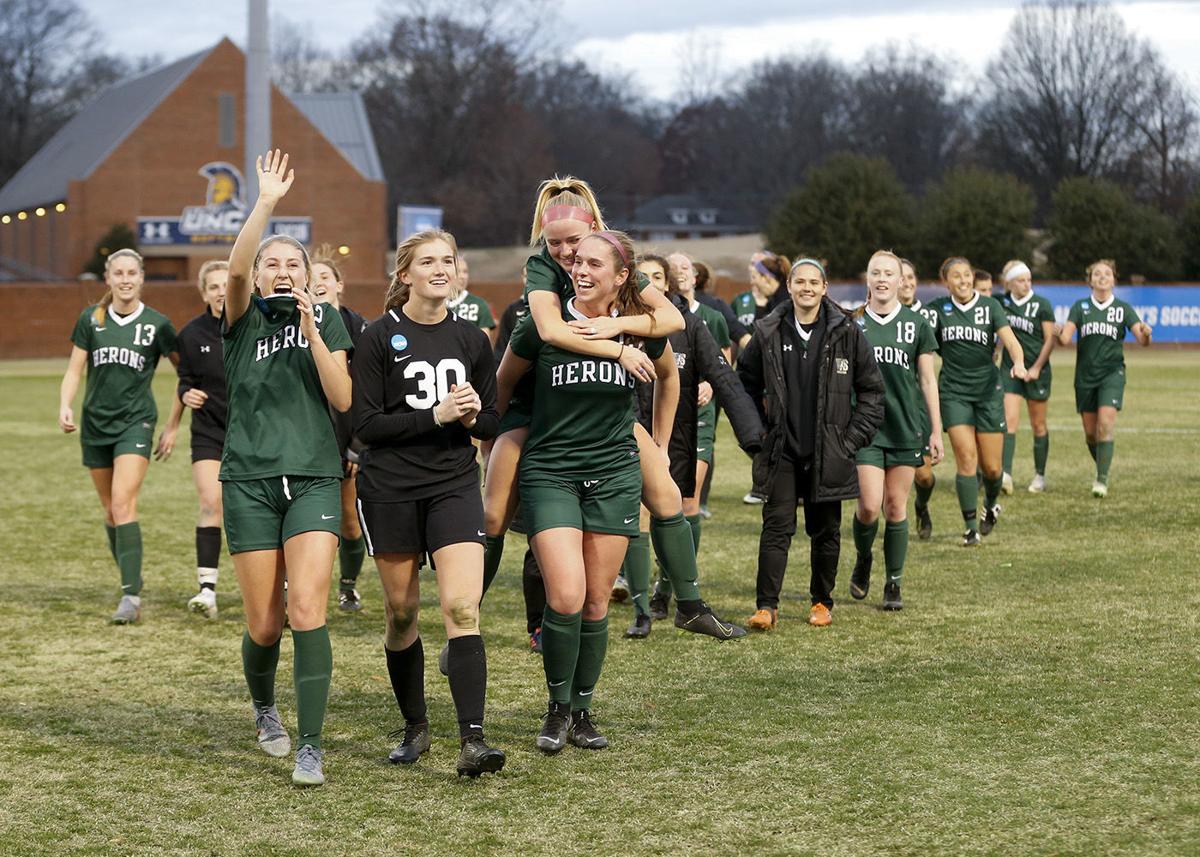 William Smith walks to the sideline, led by goalkeeper Amanda Kesler (30), after advancing to the national championship game. Kesler had five saves in the win.

William Smith senior defender Bizzy Moore (20) heads a cross into the back of the net for the Herons’ second goal of Friday’s NCAA Division III semifinal game.

William Smith walks to the sideline, led by goalkeeper Amanda Kesler (30), after advancing to the national championship game. Kesler had five saves in the win.

GREENSBORO, N.C. — Talent and athletic ability can take a team deep into any postseason, but the difference between a playoff team and a championship team involves heart and camaraderie.

No. 2 William Smith’s roster is filled with all the skilled and technically sound players a team could wish for, but their semifinal matchup against No. 8 Pomona-Pitzer showed how far their intangibles continue to take them.

If there was ever a soccer game that looked to be headed to a scoreless draw, it was William Smith vs. Pomona-Pitzer.

The two programs fall into the nation’s top-three defensive teams. The Herons used both their talent and intangibles to explode for two goals in five minutes in the second half to fly by the Sagehens 2-0 and advance to the NCAA Division III championship game.

“We have been very, very focused on Pomona-Pitzer,” head coach Aliceann Wilber said the Herons’ victory. “It’s kind of weird because we haven’t had this much time to prepare for a game all season. I think we did our due diligence … there were times where we had to play and times where we had to battle, and we did both.”

Amidst overcast skies, sprinkling rain and blowing winds, the game began with William Smith and the likes of Julia Keogh immediately pressing Pomona-Pitzer’s back line. The Sagehens did the same, and both teams registered early shots on target. It was clear early on that Sagehens’ goalkeeper and All-American Isa Berardo was the backbone of their defense and one of the finest keepers in the Division III.

But 120 yards opposite of Berardo was Herons counterpart Amanda Kesler, whose understated play has kept the Herons in the tournament with timely saves.

“People following us throughout the season haven’t really had a chance to see a lot of Amanda’s reflexes because she hasn’t faced a ton of shots,” Wilber said after the game. “So now they’re getting their money’s worth, I guess.”

Both offenses and defenses went back and forth in the first 45 minutes. The half featured each teams getting shots, corners, 1-on-1 situations and a healthy serving of physical play. William Smith soon settled into their style of play and held the majority of possession, which they spent in their opponents’ half. The tough part was finding quality looks on net, something there were very few of in the first half.

After 45 minutes, the score was level. William Smith led 8-1 in shots, although few threatened Berardo.

The second 45 was a different story.

“We felt we had a pretty good half,” Wilber said. “We were limiting their chances. Our possession was a little too small, too central and too much in front of their back line.”

Less than 5 minutes after the break, William Smith caught Pimona-Pitzer off guard on a counter and had a 3-on-2 rush upfield led by Sheila McQuillen on the right side. McQuillen then crossed a perfect ball to Keogh. Keogh’s first touch went into the feet of a Sagehen defender; then, in one motion, Keogh touched the ball forward, nutmegging adefender, circled around and found herself 1-on-1 with Berardo. With no hesitation, Keogh finessed the ball up and around Berardo and into the back of the net for the first goal the Sagehens have allowed since Oct. 16.

Keogh leaped into the air and landed in the arms of her celebrating teammates.

“Yeah, I definitely got some good air time,” Keogh joked after the game. “It was a pretty spectacular moment because we knew the chances we were going to get where going to have to go in if we wanted to capitalize on that.”

In a game as defensive-minded as this, one goal would be enough to send the Herons to the national championship. However, they decided not to take any chances, pressing just as hard following the restart.

Five minutes later, William Smith took a corner kick and instead of crossing it, Genevieve Carpenter booted a short, 10-yard pass to Emilie Sauvayre. Sauvayre then gave it right back to Carpenter who crossed the ball into the middle of the box. Out of nowhere, senior defender Bizzy Moore came flying in and snapped a header into the lower left side of the goal to double the Herons’ lead.

“All season long and especially the last two weeks we’ve really focused on making our set plays sharp,” Moore said. “(Genevieve) has been really consistent kicking the ball … today, she placed the ball perfectly, and it was my responsibility to get on the end of it.”

“The two goals back to back — soccer is like that,” Wilber stated. “It was sort of how we (played) with Stevens.”

The Herons’ relentless attack after their first goal seemed to catch the Sagehens flat-footed. Entering the game, Pimona-Pitzer had allowed five goals all year; within five minutes, the Herons exposed their back line and gave themselves a two-goal cushion.

“A lot of the past two weeks we’ve been trying to feel out their back line,” Keogh said. “We just needed the extra 45 minutes in a game sequence to understand it even better.”

With 35 minutes remaining, Kesler seemed to shine even brighter as she confidently stopped and held every single shot that came her way.

“Amanda was stellar,” Wilber said. “She had a couple big moments, and she rose to those challenges each time.”

William Smith showed their superior conditioning in the final 15 minutes of play as the Sagehens’ attacks grew less deadly and gave way to more Herons’ counterattacks. Had it not been for Berardo, the Herons may have ran up the score.

Time expired with Kesler walking toward her teammates with a confident smile as she took off her goalie gloves as if it were just another day in the office.

“I felt very prepared,” Herons goalkeeper Amanda Kesler said after the win. “I was super in the moment … feeling everything around me that was going on … I felt like I was a computer, like a robot for my positioning today.”

William Smith will need to beat Messiah a second time this year in order to bring home the program’s third national title. The Herons handed the Falcons a 2-0 defeat Sept. 7 in Geneva.

William Smith leads the all-time series between the two 5-4-3, although Messiah is 3-0 against the Herons in the final four. All three of those matchups, in 2008, ‘10 and ‘11, occurred in the semifinals.