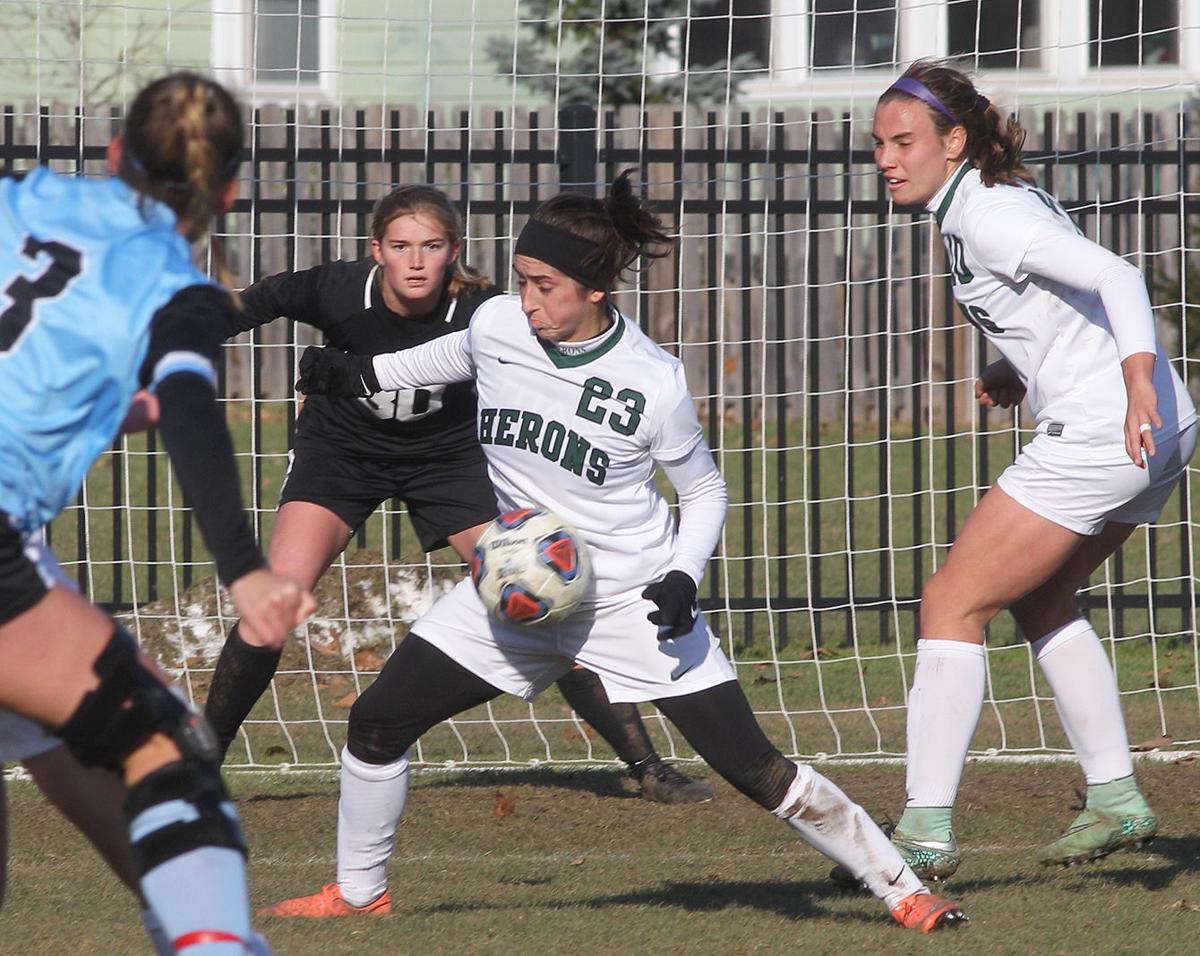 Herons defender Maialen Martinez (23) blocks a shot and then clears the ball from William Smith’s end. 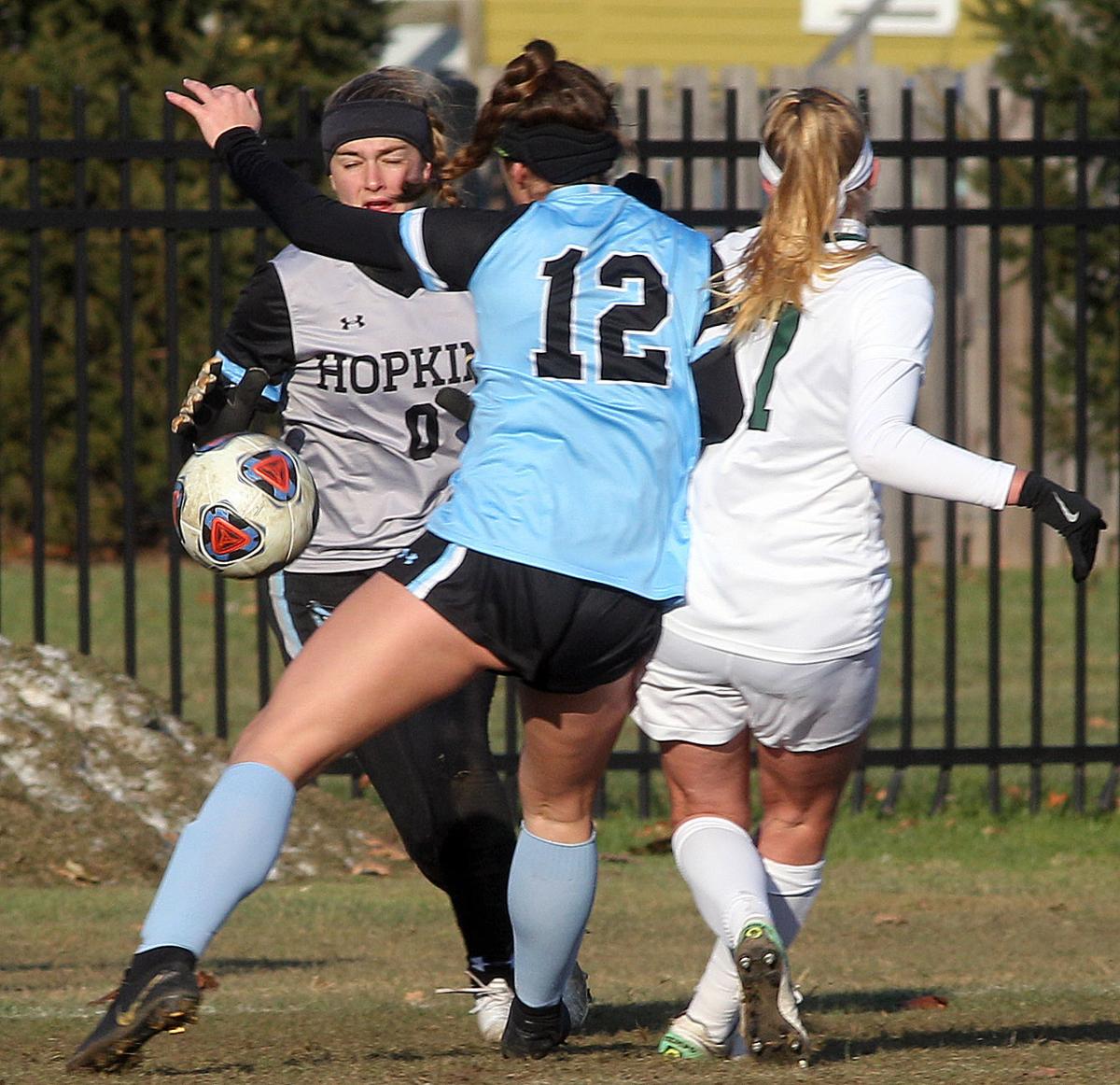 Herons forward Julia Keogh (17) one-times a pass from Sheila McQuillen pas Johns Hopkins goalie Caitlin Hendricks (0) into the back of the net for the first goal of the game. 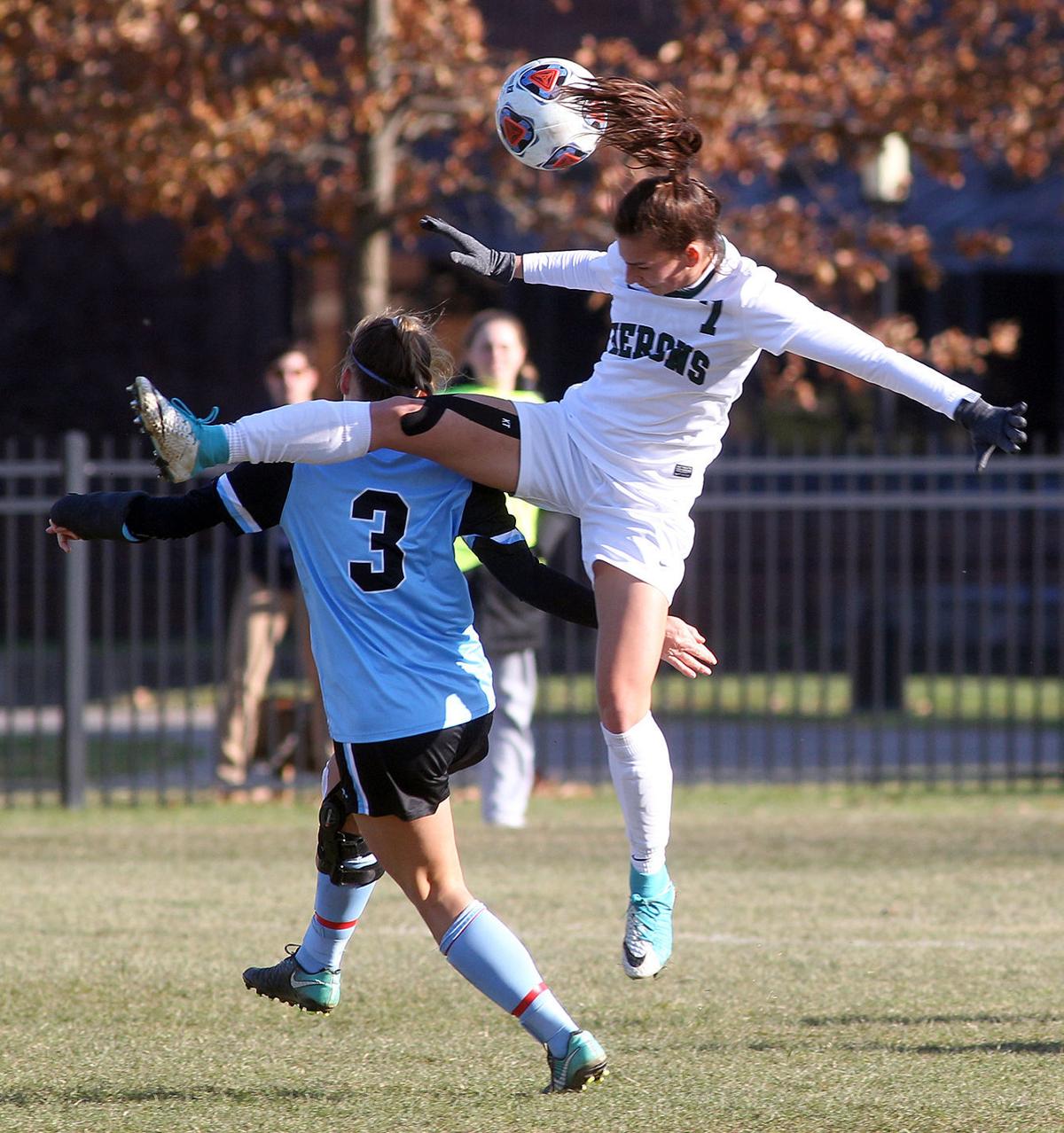 William Smith midfielder Amanda Adams (7) rises up to head the ball at midfield.

Herons defender Maialen Martinez (23) blocks a shot and then clears the ball from William Smith’s end.

Herons forward Julia Keogh (17) one-times a pass from Sheila McQuillen pas Johns Hopkins goalie Caitlin Hendricks (0) into the back of the net for the first goal of the game.

William Smith midfielder Amanda Adams (7) rises up to head the ball at midfield.

GENEVA — Quality over quantity. Often overstated, it’s what every player or team strives for. A Sunday afternoon NCAA tournament soccer game on Cozzens Field perfectly illustrated the power of that phrase.

The entire year, William Smith head coach Aliceann Wilber has repeatedly emphasized the importance of finishing chances. In nearly every single game this season, the Herons outplayed and outshot their opponents, though they did not convert on nearly as many chances as they could have.

The Herons were outshot by Johns Hopkins by a sizeable 17-3 margin; however, they scored on two of those three shots.

As a result, William Smith improved to 20-1-1 with a 2-0 victory that propelled the Herons to the Division III Final Four in North Carolina.

In three of the last four years, Wilber and a number of her players sat at the media table at HWS after losing in the national quarterfinals. Last year’s devastating loss to Williams on penalty kicks sparked something in both the returning players and their coach.

“It is a remarkable story, really,” Wilber began. “We’ve sat in the classroom after this round and just been so down and disappointed and in the depths of despair, basically. Last year, one of the seniors said, ‘I’m so tired of sitting in this room, it’s the same thing, same result.’ So how do we punch through that Elite Eight ceiling?’

“So this group, we committed to making changes to get us to the Final Four. This has been a full-on process of dedication, hard work, commitment with this goal in mind. It is really remarkable, I think, the way the individuals on the team put their hearts and souls into being part of that goal.”

The game began with Hopkins (17-3-4) providing the early pressure behind forward Rachel Jackson, who would threaten William Smith’s back line the entire 90 minutes.

An early scare came within the first 15 minutes of play as a clearing effort by Hopkins rolled all the way toward Herons goalkeeper Amanda Kesler. Two Heron defenders were in the area and there was some confusion as Kesler didn’t rush to pick up the ball and the defenders did not clear it. Jackson split the defenders and got off a shot that was headed for inside the left post. Only a remarkable diving stop by Kesler saved a goal and kept it scoreless.

It was evident early on that the Blue Jays were the most physical team the Herons have played all year. The referee was willing to let a lot of contact take place, and the Blue Jays, who averaged over 11 fouls a game, used it to their advantage.

“I thought we would have a little more time at midfield, to be honest,” Wilber said. “We didn’t see that yesterday (in Hopkins’ game against Dickinson). We know they’re a more direct team. In their analysis of us, I think they must have thought, ‘Well, they can’t deal with a physical game so we’ll bring that to them.’ We had to get used to it but the beginning threw us off.”

William Smith eventually settled down and began pressing the Blue Jays’ back line, though with no luck or shots to speak of. After a few more huge saves by Kesler, the Herons seemed relieved to make it to halftime.

To their credit, the Blue Jays were excellent at blocking out and using their physical tools to their advantage. Jackson continued to press, forcing William Smith defender Maialen Martinez to play one of her finest games of the year.

“Besides being very physical and strong — and fast, she was very fast — she was also smart off of the ball,” Martinez said of Jackson. “She would move a lot, more than we’ve ever seen so far this season. We had to make adjustments and Eileen (Rath) and I had to talk more than ever to make sure she wasn’t alone.”

Despite a strong back line, Johns Hopkins had their weaknesses, and the Herons sniffed them out and struck a blow in the 59th minute.

Sheila McQuillen, who scored a pair of goals against Stevens on Saturday, pushed the ball up the right side with Julia Keogh in support. As a Blue Jay defender stepped in toward McQuillen, a lane opened, and she played a beautiful ball toward Keogh, who powerfully one-timed a shot into the back of the net from 10 yards out for a 1-0 Herons lead on their first shot of the game.

Keogh has been a focal point of the William Smith offense all postseason and has come within feet and even inches of scoring throughout the tournament. She certainly deserved the moment.

“It was amazing,” Keogh said with a sigh of relief. “We knew this game was going to be very tight. We knew whatever chances we got we were going to have to put away. So it just came down to that.”

With the lead, the Herons’ play picked up, and they continued to test Johns Hopkins. 12 minutes later, Martinez had the ball at midfield and patiently waited for the Blue Jays’ back line to step up. As soon as they did, she rifled a through ball to the left of the defense for none other than McQuillen. McQuillen’s speed continues to be unrivaled as she blew by the Blue Jay defense and shot a perfectly placed ball off her left foot just inside the far right post to make it 2-0.

McQuillen is red hot. The junior from Natick, Massachusetts has scored five goals in four NCAA tournament games this year and is playing her best soccer at the right time.

When asked about her form, Sheila was taken by surprise, “Oh gosh! I would say yes, I get to go to practice tomorrow!

“For me, their outside backs stepped higher than most, but that also left them vulnerable, so that’s how we got our chances,” McQuillen added.

As Hopkins went into an all-out attack, William Smith retreated and spit out every ball that came near their goal. With one final clearing effort, the horn sounded, sending the Herons to the Final Four for the first time since 2013, when they won their last national championship.

The Final Four will be played Dec. 6-7 UNCG Soccer Stadium in Greensboro, North Carolina, with the University of North Carolina at Greensboro and Greensboro Sports Foundation serving as hosts. There will be a new national champion this year as defending champs Williams College was knocked out in the quarterfinals.

The Herons will play Pomona-Pitzer of Claremont, California in one semifinal at 1:45 p.m. on Dec. 6. The other semi at 11 a.m. pits two Pennsylvania schools, Messiah College vs. Carnegie Mellon. The winners play for the national title at 2:30 p.m. on Dec. 7.

“It was very hard to get through this weekend,” Wilber said. “Whatever (happens) after this, we’re going to enjoy it.”