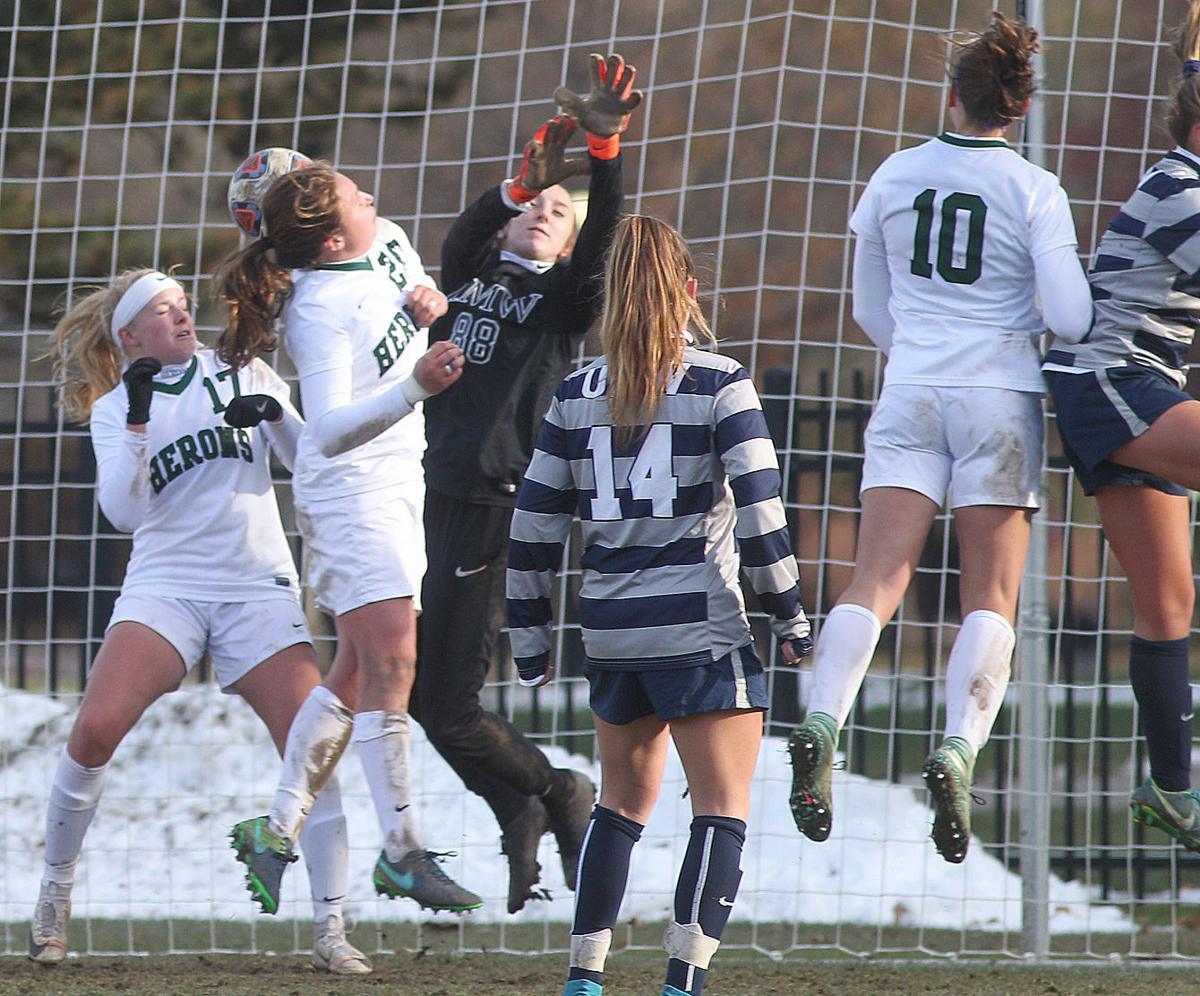 William Smith’s Elizabeth Moore (20) and Julia Keogh (17) try to take advantage of a scoring opportunity off a corner kick, but have no luck. 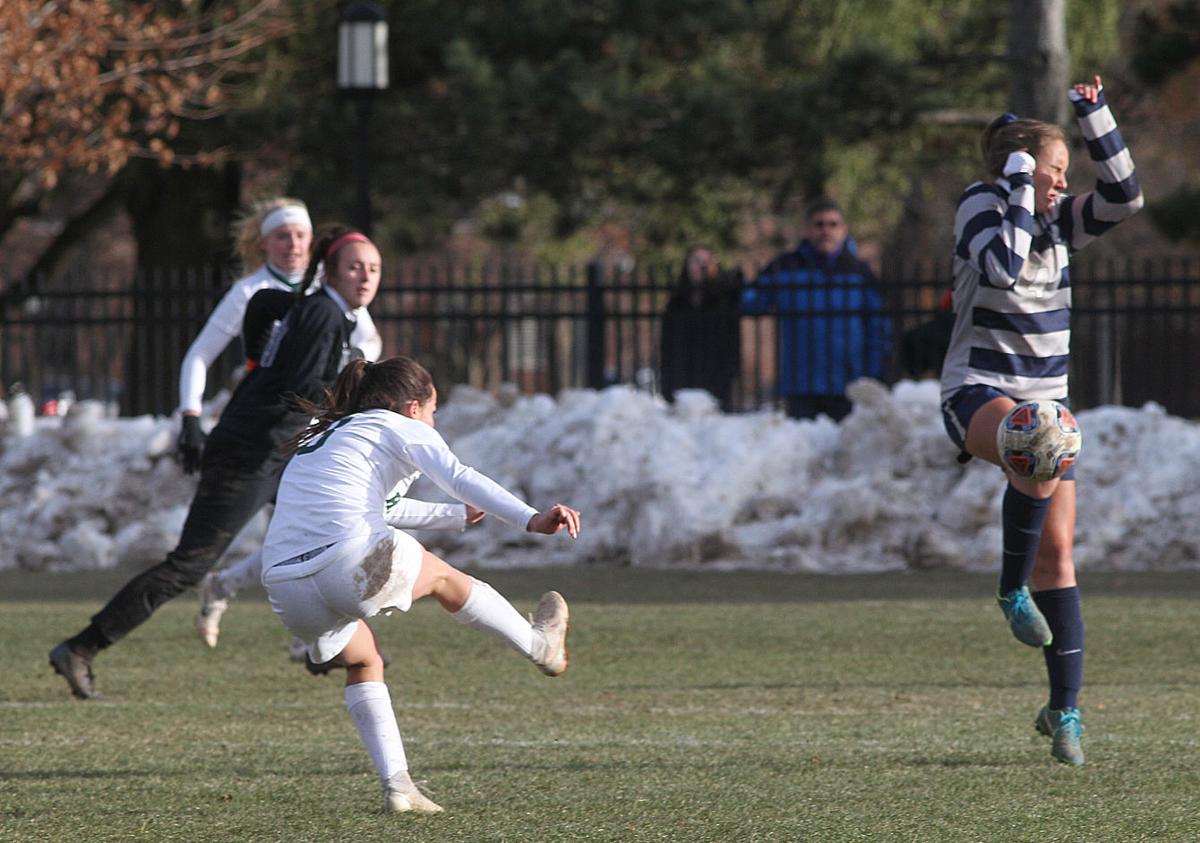 Junior forward Shelia McQuillen (8) launches a shot from far out, resulting in the games second goal.

William Smith’s Elizabeth Moore (20) and Julia Keogh (17) try to take advantage of a scoring opportunity off a corner kick, but have no luck.

Junior forward Shelia McQuillen (8) launches a shot from far out, resulting in the games second goal.

GENEVA — On Saturday, William Smith Herons had a rough time getting balls past Utica goalkeeper and Canandaigua-native Allison Wagner. The Herons peppered Wagner with 45 shots and only managed to put three past her.

On Sunday in the second round of the Division III NCAA Tournament, William Smith faced off against University of Mary Washington and had no such issues. The Eagles’ goalkeeper had a day to forget in net as she slipped multiple times, dropped shots, took cleats to the face and head knocks all game long.

William Smith (18-1-1) did not have nearly as many shots, but still managed to get two goals against Mary Washington (12-11-0) in their 2-0 win, advancing to the third round.

It was the first time the two programs ever met. Mary Washington’s play was completely different than Utica’s. The Eagles, who upset Geneseo on Saturday — were a strong and fast team with a dangerous counterattack.

“It was a different kind of game than yesterday,” Herons coach Aliceann Wilber said after the game. “The tactics of Mary Washington was very different than Utica’s.

“Mary Washington is a very athletic team, a direct team. So it was a good fight for us to deal with both a style of play we don’t normally play against and to deal with (their) overall athleticism.”

It did not take long for the Herons to find their form as they began to control play after the first 10 minutes.

In the 17th minute, Emilie Sauvarye took a set piece free kick from the left side of the box. She fired a curling shot towards goal that was tracking towards Eagles’ goalkeeper Allison Nork, who put up her hands to catch it but it went right through and amidst a crowd of players. Senior Eileen Rath immediately volleyed the ball into the back of the net within the blink of an eye.

The goal was reminiscent of the senior defender’s mad-scramble goal against Vassar in the Liberty League Championship.

What could Jordan Love do for Packers as a rookie? Amid uncertainty, coaches won’t rule anything out

Wilber then chimed in with a smile on her face, “I think I should make all the forwards defenders.”

Following Rath’s third goal of the season, Mary Washington dialed up their counterattack as their defenders and midfielders would send the ball upfield and the forwards would give chase. This strategy worked well against Geneseo on Saturday, but not against the Herons, whose speed and technical skill prevented the Eagles from getting any real chances or establishing possession.

“We just had to make sure to stay disciplined and have a lot of cover,” Rath added. “Staying together as a team was really big — making sure we were defending together.”

William Smith came out more aggressive and potent in the second half. Six minutes in, Mariah Deschino possessed the ball at midfield and hit a perfect lob pass over Mary Washington defenders into the path of Julia Keogh. Nork then came out of her goal to cut off Keogh and took a one of several rough collisions she had on the day. The ball then deflected back to Sheila McQuillen who lobbed a shot over three defenders from 25 yards out into an empty net for a 2-0 lead.

To their credit, the Eagles still had pace and managed to spend over five minutes attacking in William Smith’s end, something that few teams have done all year. Despite their dogged determination, the Eagles couldn’t crack the Herons’ back line or goalkeeper Amanda Kesler. In spite of having a rough day on the pitch, Mary Washington’s Nork made a handful of excellent saves to keep the score at 2-0.

William Smith then spent the final 10 minutes snuffing out every Mary Washington attack and chewing up clock by playing keep-away in the corners.

As time ran out, the Herons earned their 16th shutout of the year and advanced to the third round. The time and location is to be determined.