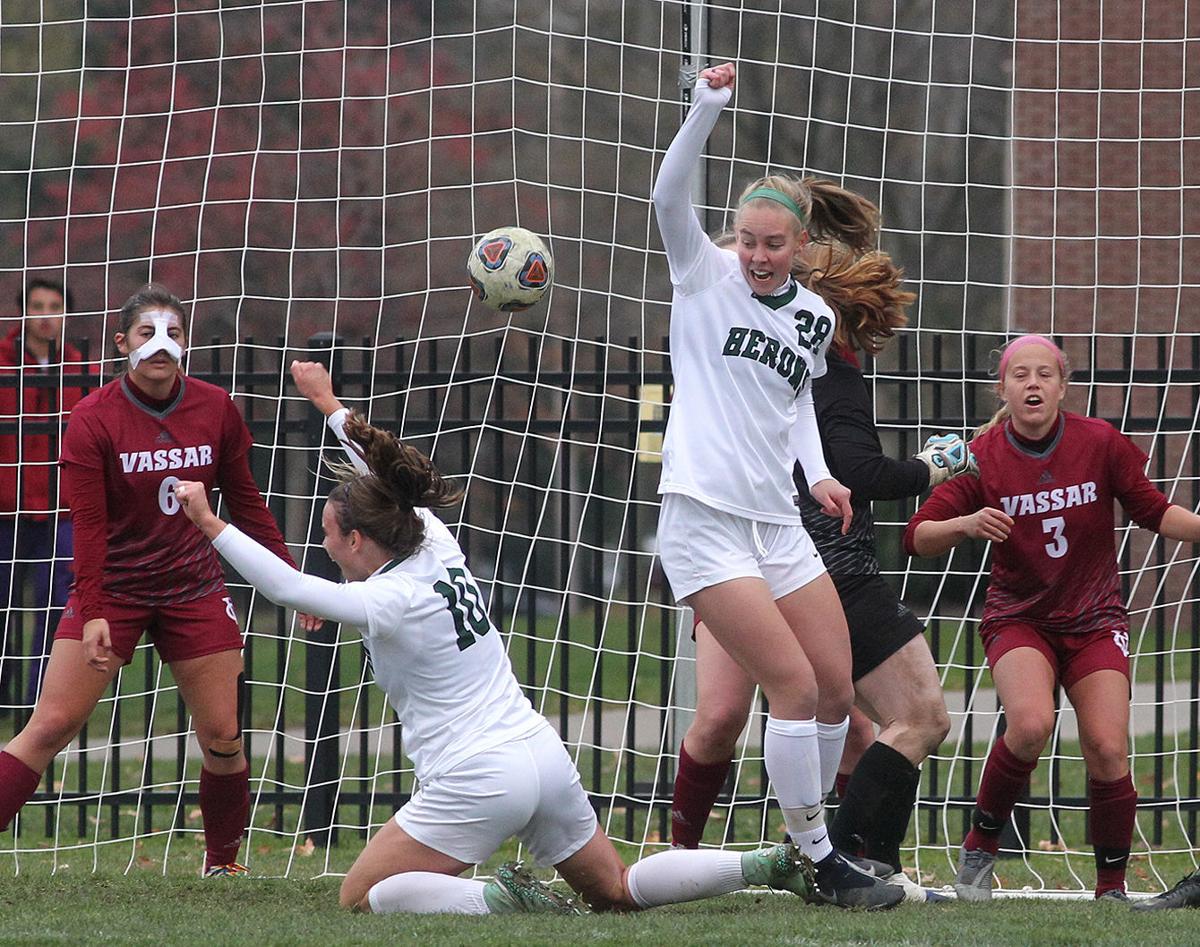 Senior defenseman Eileen Rath (10) reacts as her shot goes in the back of the net after a corner kick. 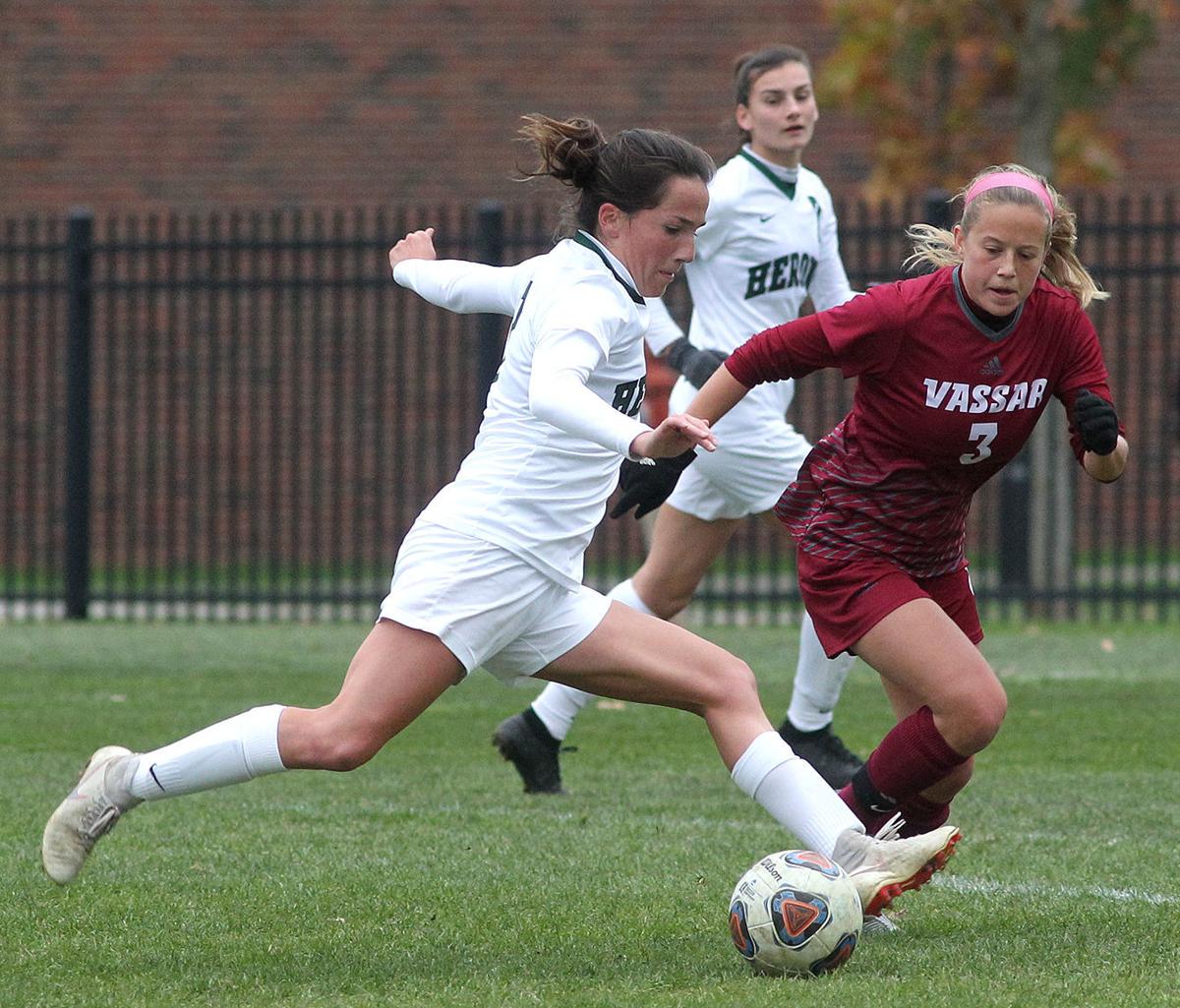 Senior defenseman Eileen Rath (10) reacts as her shot goes in the back of the net after a corner kick.

GENEVA — In 2006, the President of the United States was George W. Bush, Google purchased YouTube for $1.65 billion and the Blu-Ray Disc and Nintendo Wii were released in the United States.

2006 was also the last time the William Smith Herons soccer team did not claim the Liberty League Championship.

It was a dominant 90 minutes by William Smith. The No. 2 ranked DIII women’s soccer team did not allow a single Vassar shot while firing 23 shots towards goal.

With the win, William Smith head coach Aliceann Wilber claims yet another Liberty League Championship, but chooses not to think about the streak all that often.

“Honestly, I try to block that (the streak) out,” Wilber said with a chuckle. “It can be little heavy. The streak can be a great thing and the program and players are really proud of it, but it has its weight.”

That weight comes into play when the streak is in jeopardy of being broken. No player wants to be apart of the team that loses the 13-year long streak, and the 2019 Herons were determined not to let that happen.

The game began with an aggressive Herons attack that pushed forward from the first minute onward. Sheila McQuillen, Julia Keogh, Mariah Deschino and Amanda Adams all had excellent opportunities to put the ball away in the first half. McQuillen headed a ball just wide, while Keogh had several shots inches over the bar — and Deschino had a shot saved by Vassar goalkeeper Fiona Walsh.

After 12 shots towards goal, the Herons took a corner kick with just over two-and-a-half minutes to play in the half. The ball curled into the box and a mad scramble ensued that ended with Eileen Rath scoring her second goal of the season to give the Herons the only goal of the game.

“Julia Berg just headed it in from the top of the box,” Rath fondly recalled after the game. “I saw it come right in front of me and I just kicked it and it went in.”

Following the goal, the Herons continued to chip away at Vassar’s defense but to their credit, the Brewers held steady. They certainly looked much improved since the Herons beat them 4-1 back on October 12.

“They fought their way to the final,” Wilber said of Vassar. “Credit to them. I think they’ve improved a lot. They played with a lot of passion and intensity and I think we defended all of that pretty well.”

Oddly enough, Vassar was the last team to score a goal against the Herons this season, who have not allowed a goal against in their previous seven games.

In the second half, William Smith chewed up clock with their continued attacks. McQuillen hit a post and touched a ball inches wide of an open net. The Herons had several opportunities to widen their lead, but settled for a 1-0 victory and their 13th straight Liberty League Championship.

After the game, Amanda Adams was named Tournament MVP, something that took her by surprise.

“Yeah honestly I forgot that they even did it,” Adams said. “I feel like we all worked so hard as a team that I didn’t really think you could pick one person. Every time when I looked up when I had the ball everyone was where they were supposed to be.”

This year’s championship is Rath’s fourth in four years of playing. With that many championships, players and teams can get complacent. However, this year’s title is just as sweet, if not sweeter then all the years prior.

“No, it never gets old. This feeling is awesome,” Rath said with a wide smile. “We’re so much like a family this year. We all want it for each other, we’re all supportive of each other and that just makes the difference.”

Despite having every team in the Liberty League gunning for the Herons every year, they have managed to stay leaps and bounds ahead of their competition year-in and year-out. It’s not just the talent they have, it is the mindset the coaching staff has put in place over 13 years of supremacy.

“We have a saying in the locker room,” Adams added. “Pressure is privilege.”